This exhibit celebrates the publication of At the Barriers (University of Chicago Press, July 2009), the first book-length collection of essays about British-born poet Thom Gunn. Edited by Joshua Weiner, the volume surveys Gunn's career from his youth in 1930s Britain to his final years in California. Weiner's essay in the volume, "From Ladd's Hill to Land's End (and Back Again): Narrative, Rhythm, and the Transatlantic Occasions of 'Misanthropos,'" makes use of the University of Maryland Libraries' Thom Gunn Papers. Weiner positions "Misanthropos" as significant within Gunn's poetic oeuvre, as an attempt to capture his vision of and for poetry, in style, form, and occasion.

Digital surrogates of some of the primary sources cited in Weiner's essay appear in the exhibit as well as an additional item related to "Misanthropos" from the Archives of the Poetry Book Society, another of the Libraries' literary manuscript collections. The manuscripts in this exhibit document Gunn's attitudes and ideas before, during, and after the poem's composition. The photographs of Gunn, taken during the time he was in London completing "Misanthropos" during the 1964-1965 academic year, were contributed by Marcia Tanner.

Joshua Weiner is an associate professor of English at the University of Maryland, College Park, and the author of two books of poetry, The World's Room (2001) and From the Book of Giants (2006).

Mike Kitay, Gunn's literary trustee, generously granted permission to include the digital surrogates from Gunn's notebooks and manuscripts exhibited here. The Libraries also are grateful for the cooperation of Joshua Weiner and the University of Chicago Press. The members of the Libraries' Literary Manuscripts unit are especially appreciative of Marcia Tanner's generosity—she not only provided digital surrogates of photographs from her personal collection, she also graciously provided text to accompany them in the exhibit. 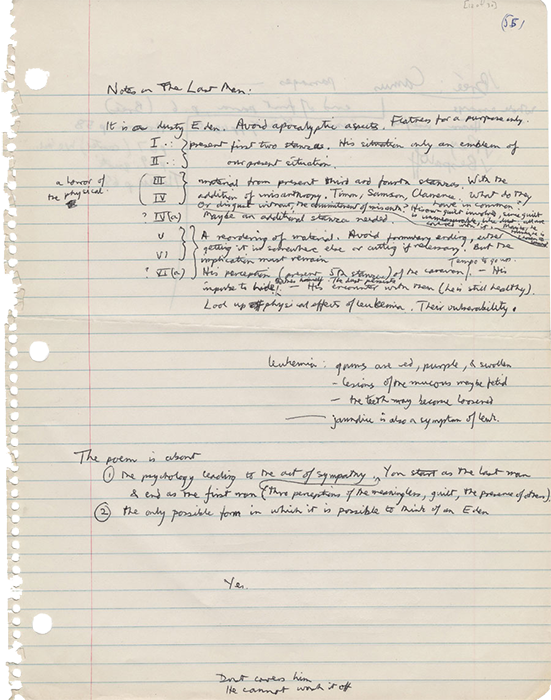