"I search for meaning, studying to remember / what the world was, and meant. Therefore I try / To reconstruct it in a dying ember"

Gunn's notebooks list sources for his poems. In this entry, titled "Volume I of notes for For the Survivor," Gunn lists as sources for "Misanthropos" works of great variety, both from a span of historical periods and from disparate genres. 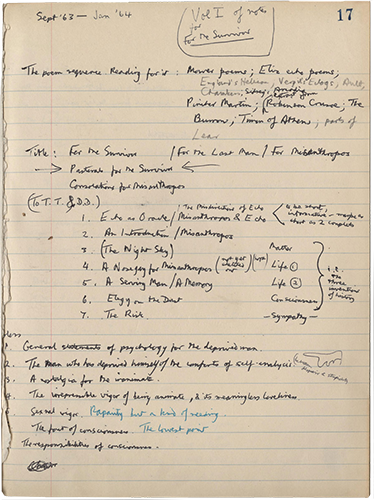 This entry, "A First Draft of the Series as Series," is one of several drafts illustrating Gunn's arrangement of "Misanthropos" that also includes a dedication to Don Doody, an American friend and Tony Tanner, a Cambridge (UK) critic. Tanner and Gunn met at the University of California, Berkeley, where Gunn was a faculty member when Tanner was a visiting scholar on a Harkness Fellowship. Many of the themes and ideas in "Misanthropos" were influenced by Gunn's discussions with Doody and Tanner. 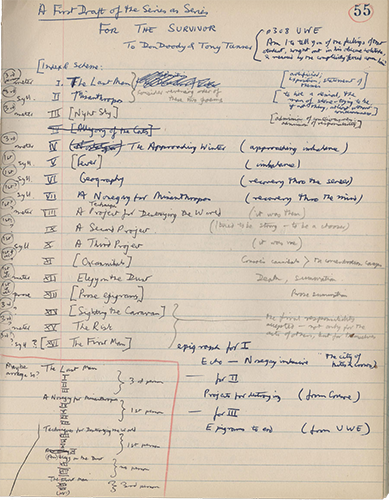 "The Book for the Survivor: Misanthropos, Last Notebook," January 1965

Gunn consulted with Tanner as he wrote "Misanthropos." In this draft of a letter to Tanner, Gunn responds to Tanner's criticisms and sends a new version of the poem for Tanner to review. 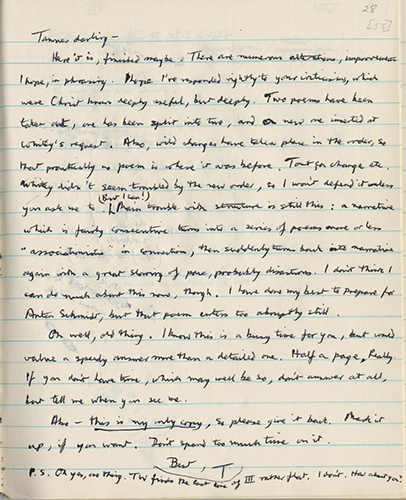