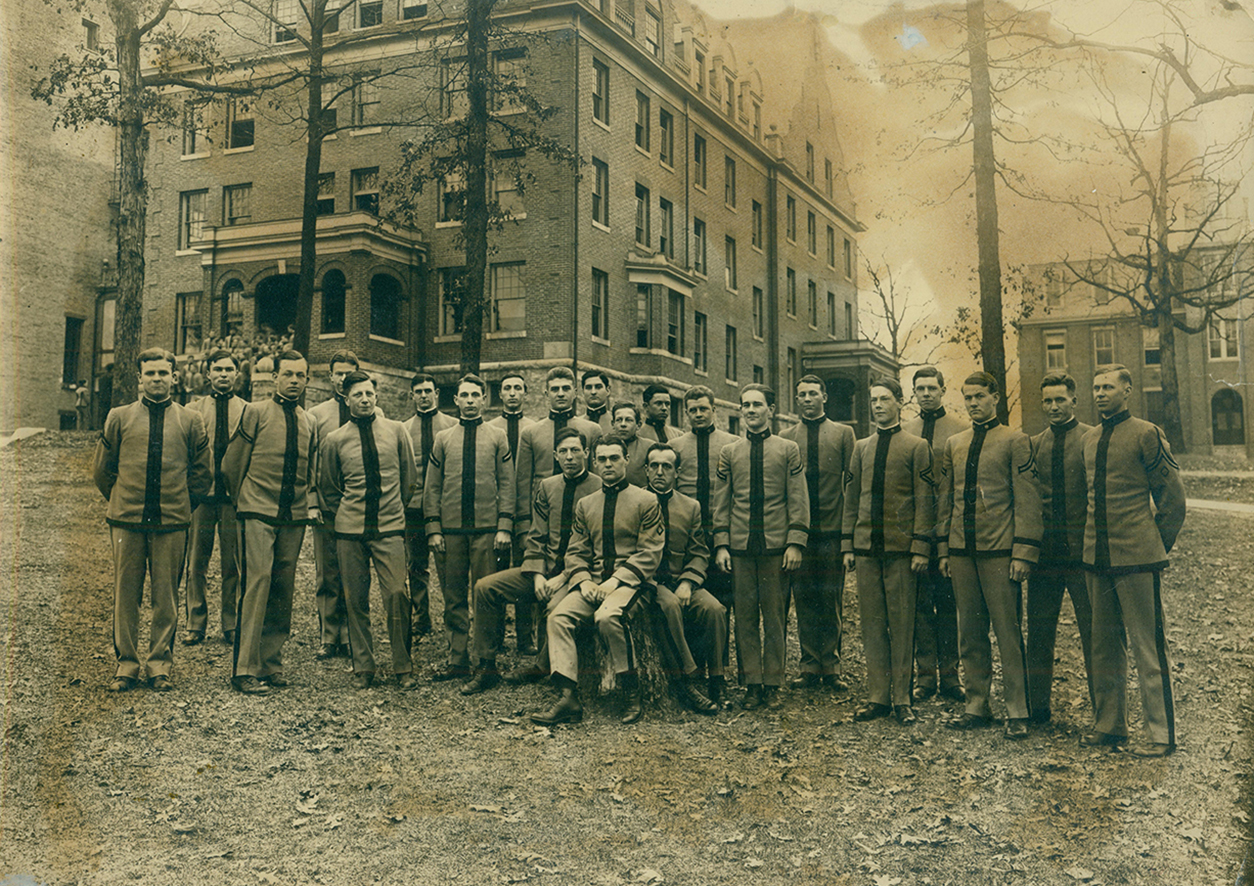 Uniformed M.A.C. cadets pose for a Junior class portrait in 1912, not long before the fire. In the background stands the Administration Building, also known as the New Barracks. Completed in 1904, this building was a source of great pride for the institution, making its eventual loss particularly painful. 1912 Reveille, UPUB S36.001. 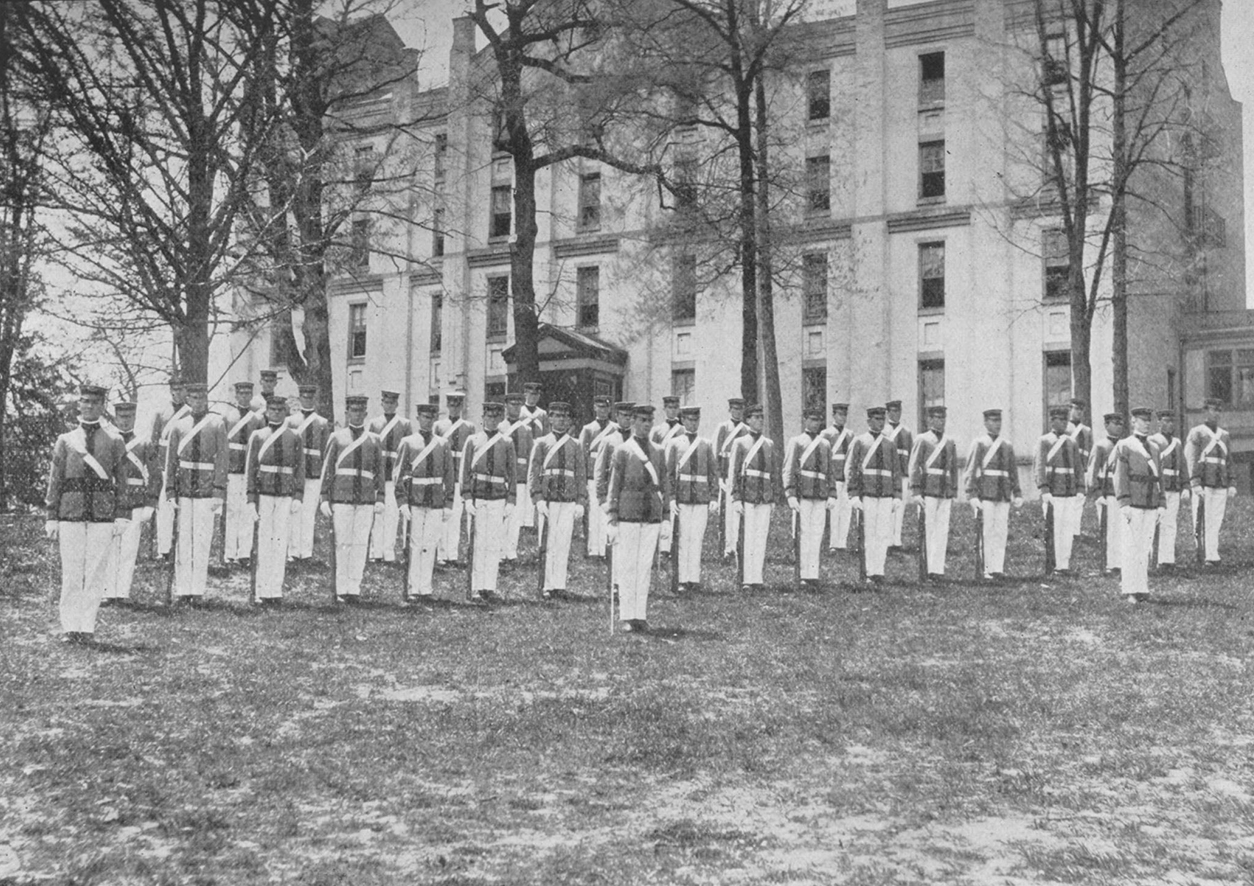 Uniformed M.A.C. cadets of Company B stand in formation in front of the Old Barracks. Completed in 1859, this structure was the oldest building used by students and faculty at the time of the 1912 fire. It had housed cadets almost since the institution opened. Accounts differ, but some say that the fire of 1912 started in the basement of the Old Barracks while cadets and their dates dined upstairs. 1911 Reveille, UPUB S36.001.

This image shows the M.A.C. campus grounds in 1904 with cadets standing in drill formation on the central lawn. Eventually lost to fire in 1912, The Old Barracks appear in the background on the left and the Administration Building is just to its right. Morrill Hall, visible to the right of the Administration Building, survived the fire and is now the oldest standing structure on the main campus of the University of Maryland, College Park. Maryland Agricultural College, Acc. 72-217. 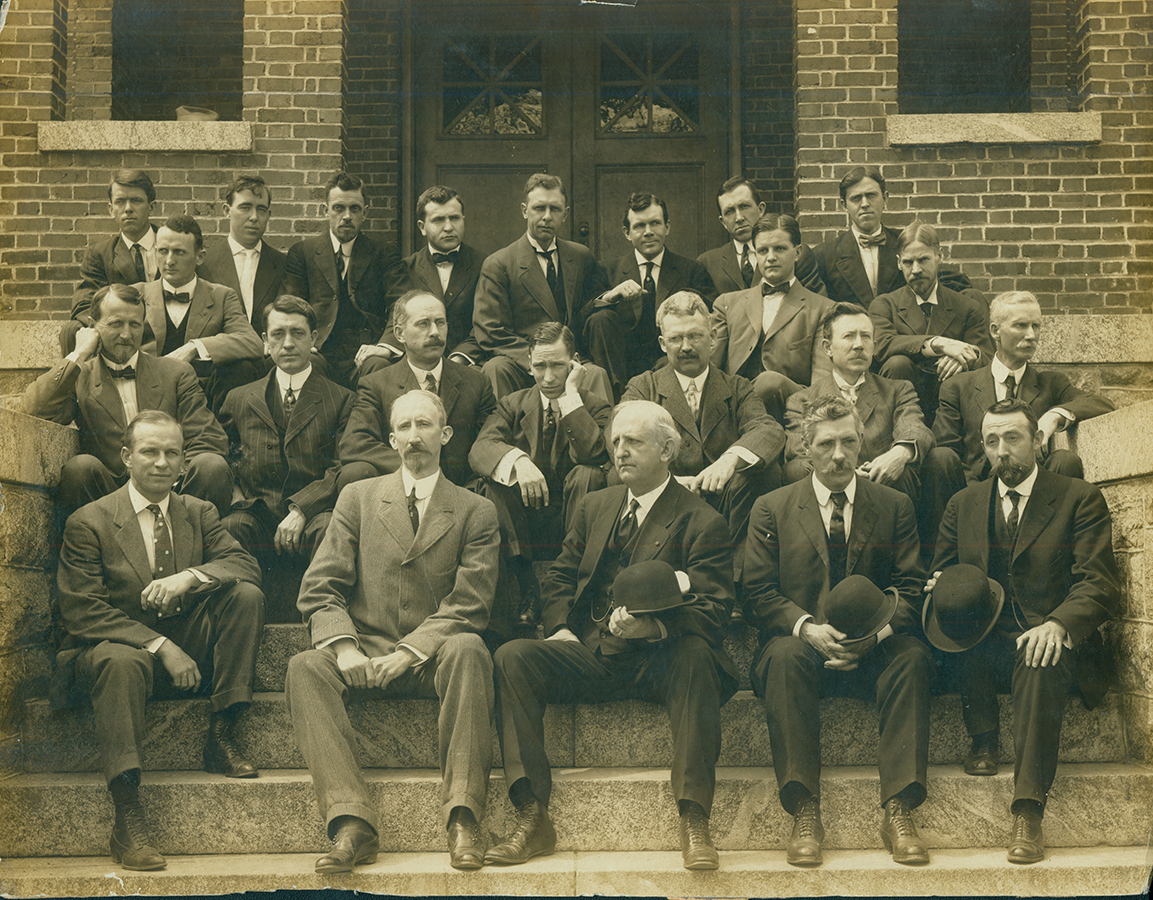 Not long before the fire, faculty and administrators of M.A.C. sat for a portrait on the front steps of the Administration Building. President Richard W. Silvester appears front row center. 1911 Reveille, UPUB S36.001. 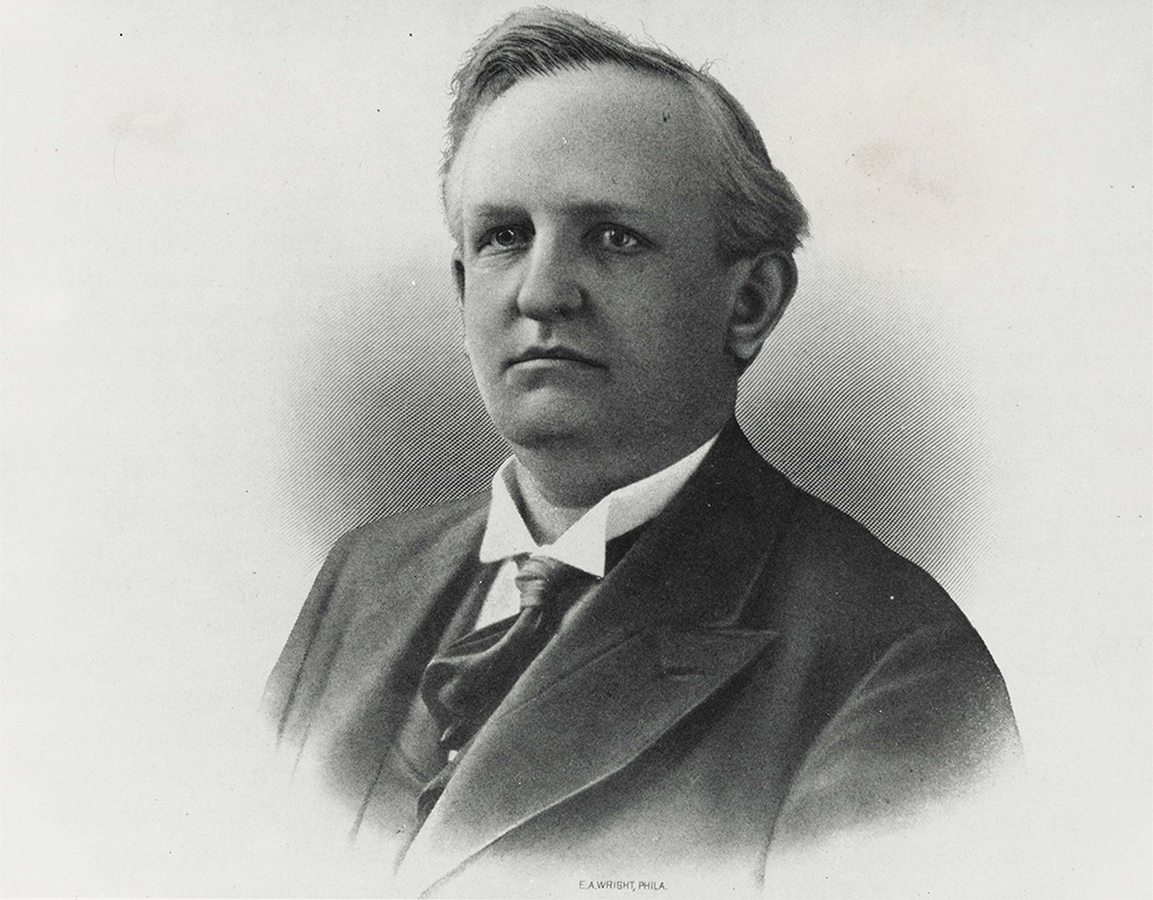 At the helm of the campus since 1892, M.A.C. President Richard W. Silvester supervised the construction of seven new buildings before the fire interrupted the progress of his presidency. Silvester resigned shortly after the great fire, allegedly in despair over the conflagration and died of an illness three years later. University of Maryland Biographical Print File, Acc. 524.

This photograph shows the Barracks engulfed in flames on the night of November 29, 1912. By morning, two of the school's most valued structures were completely lost, and students found themselves with no place to live on campus. University of Maryland Print File, Acc. 6377 © Lee Pennington. 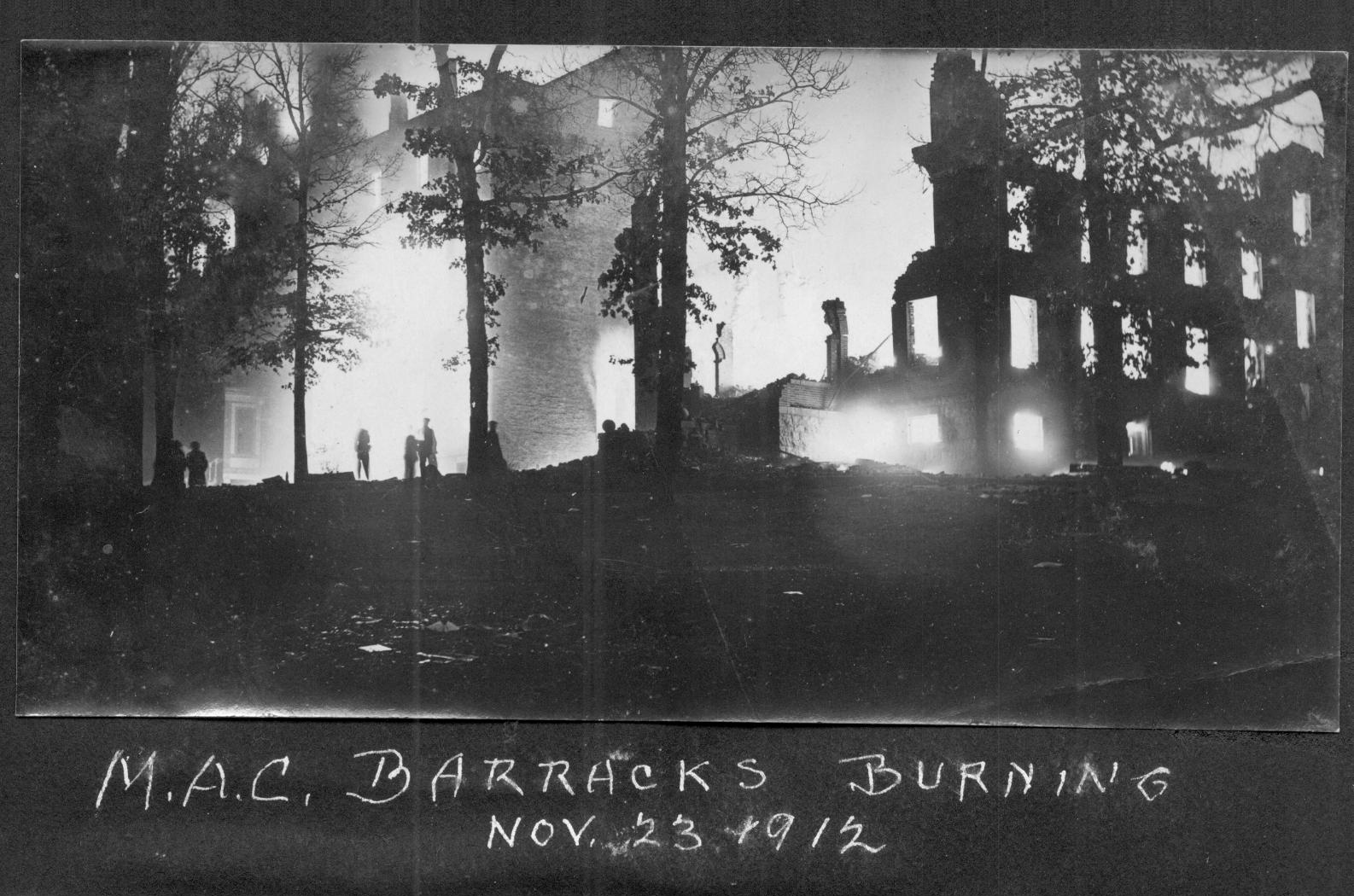 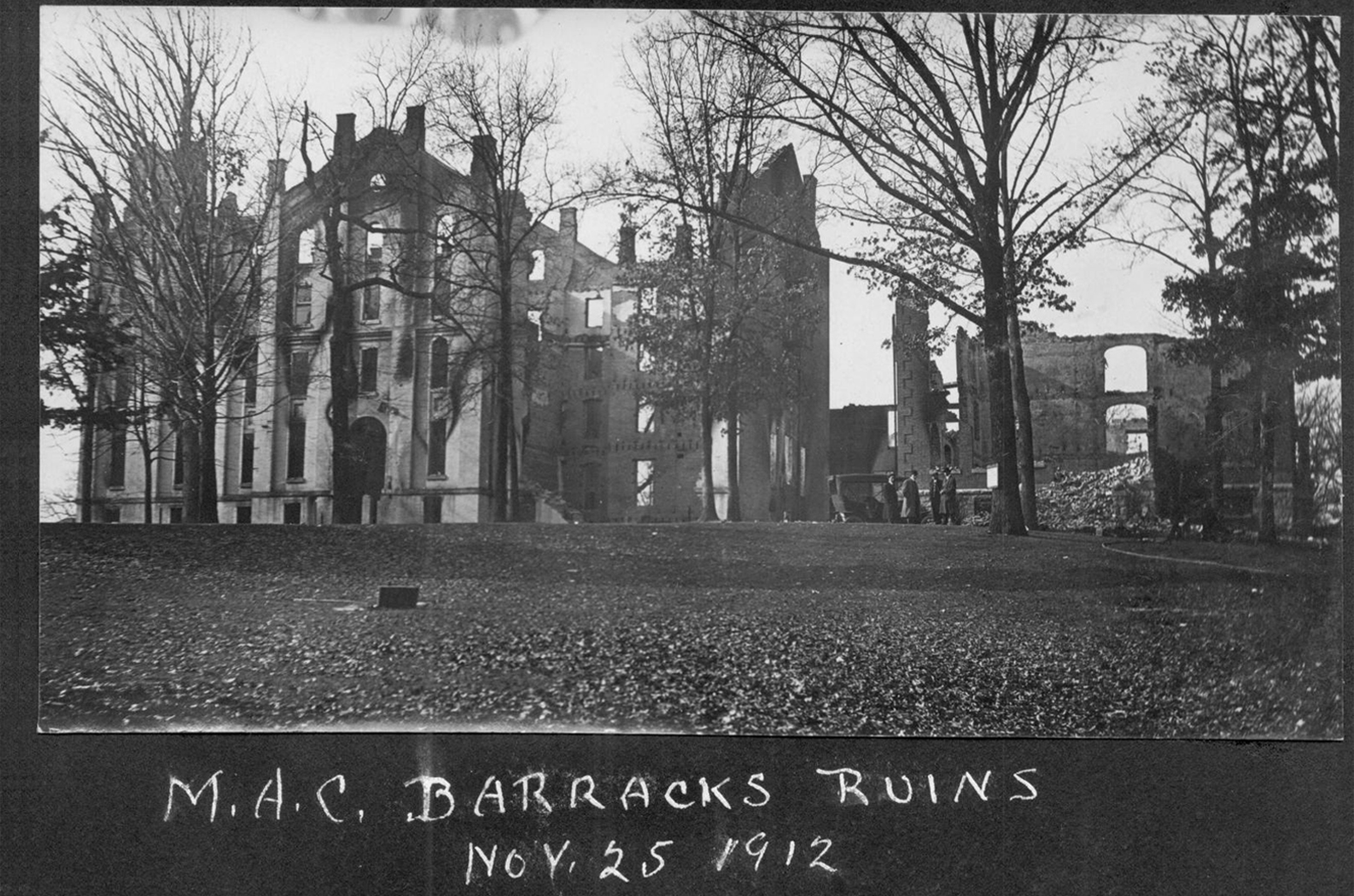 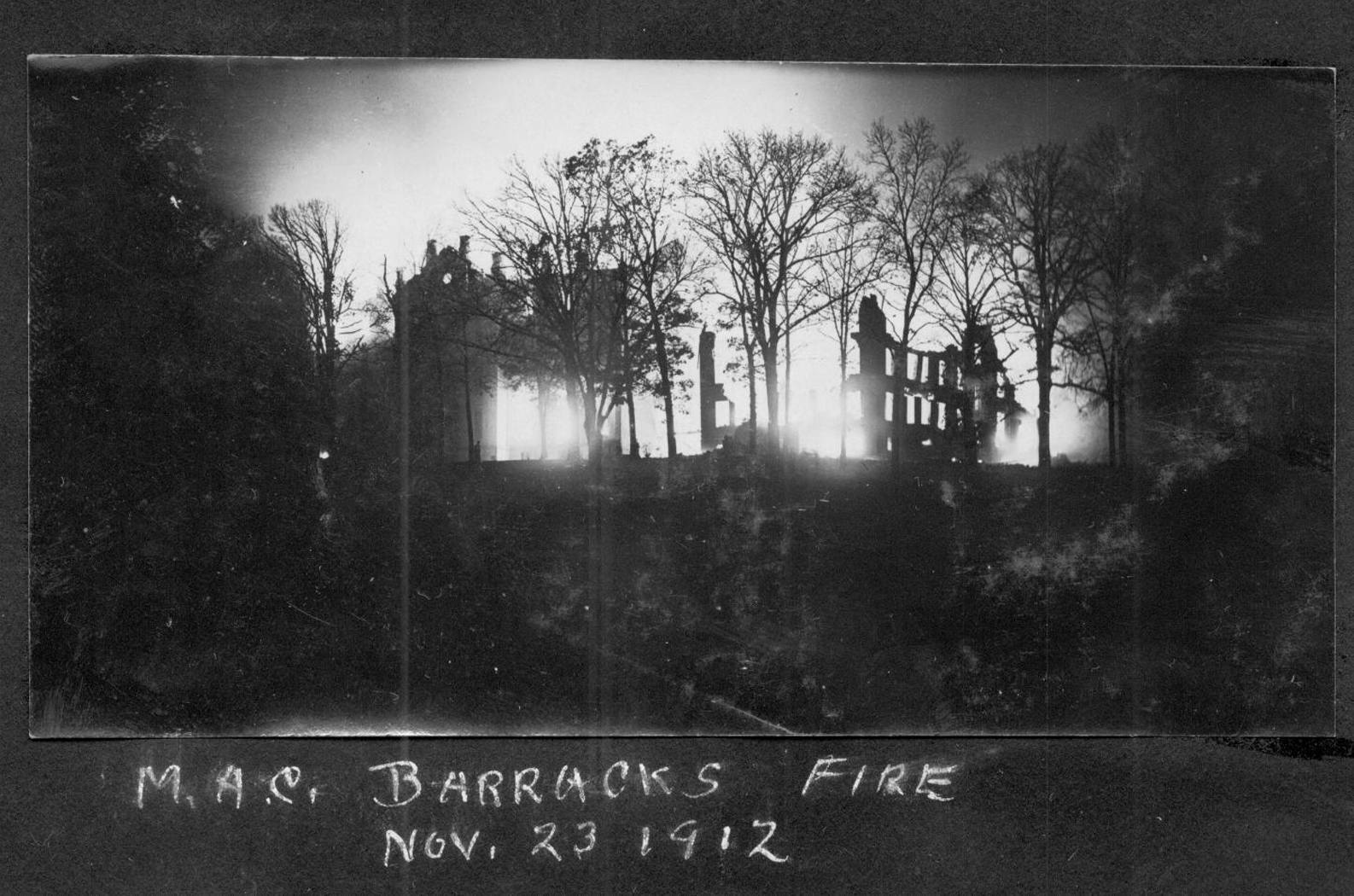 Three views of the Barracks succumbing to flames. These images were donated to the University by Edwin Powell, M.A.C. Class of 1913. Powell mounted the photographs onto black paper and wrote captions to identify each image. The dates he included appear to be incorrect. Edwin Powell Collection, Acc. 74-22. M.A.C. cadets stand with their salvaged possessions on November 30, 1912. There were no human casualties, but on the morning after the fire it became apparent to all just how extensive the structural devastation truly was. Witnesses described an eerie calm that descended on the group of students and faculty who had fought the blaze through the night. That day would mark the beginning of a new era for Maryland Agricultural College. University of Maryland Print File, Acc. 1537. 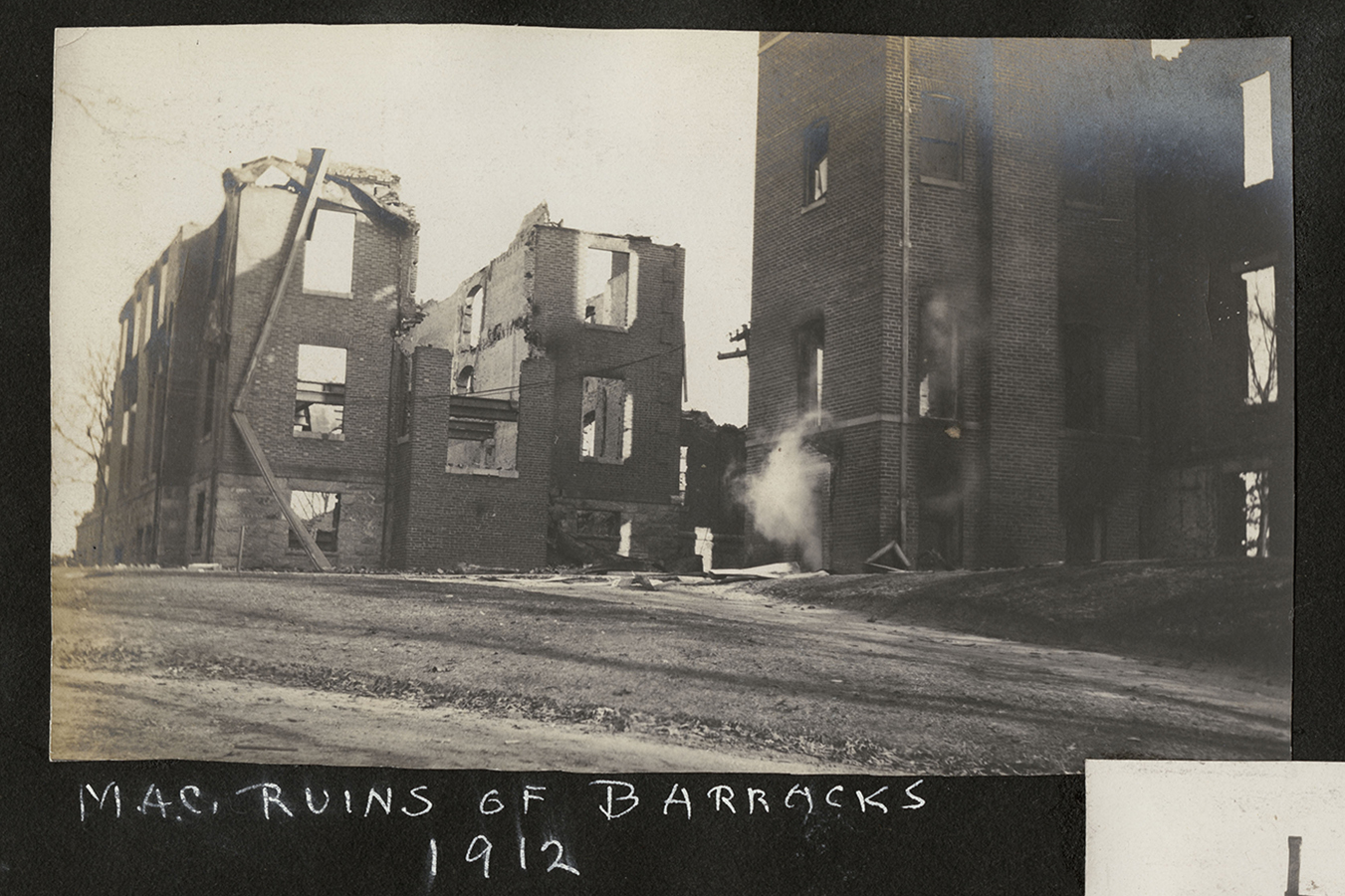 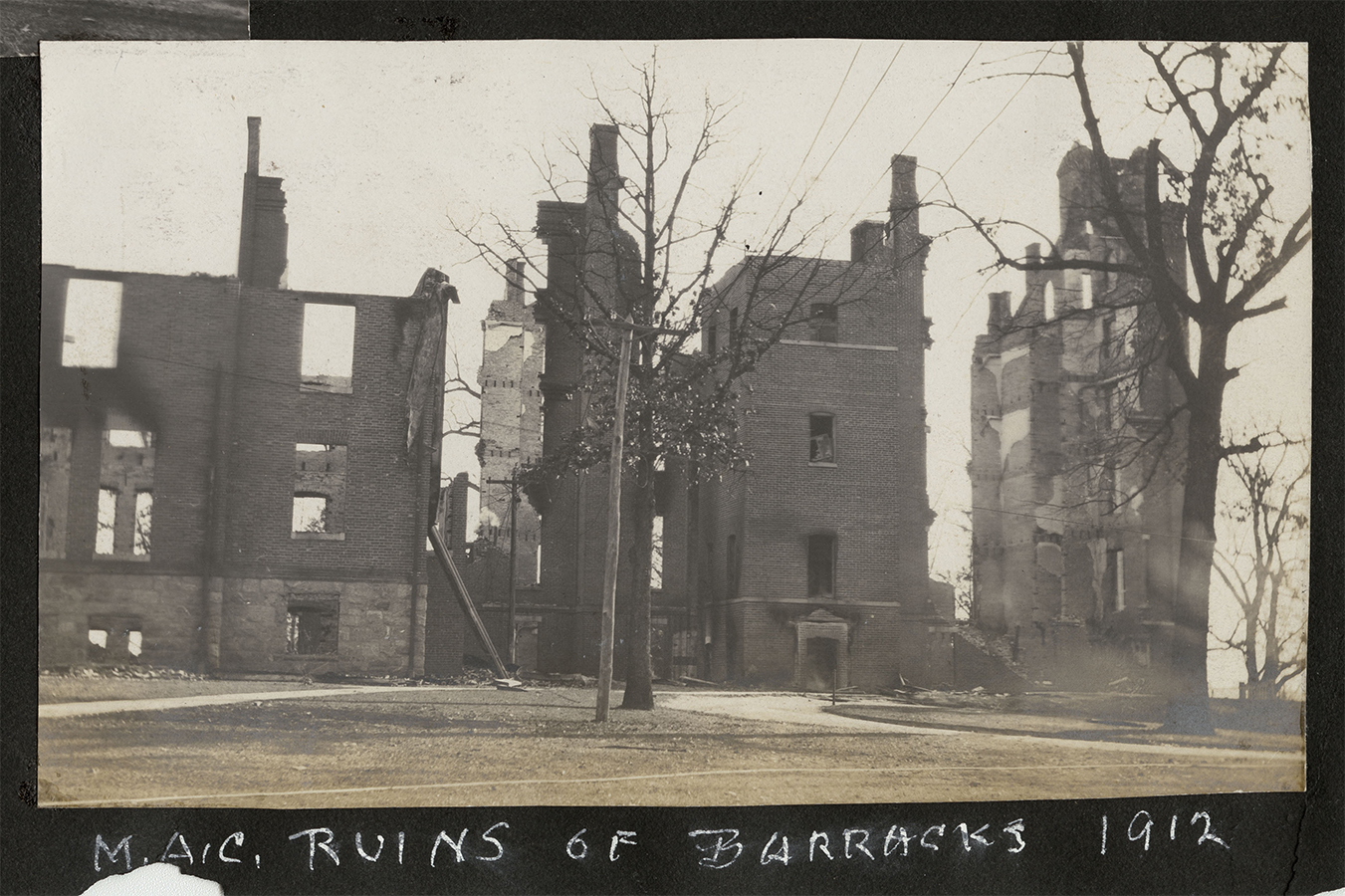 Two views of the Barracks after fire swept the M.A.C. campus. Edwin Powell, Class of 1913, mounted and captioned these photographs before donating them to the University of Maryland. Edwin Powell Collection, Acc. 74-22. 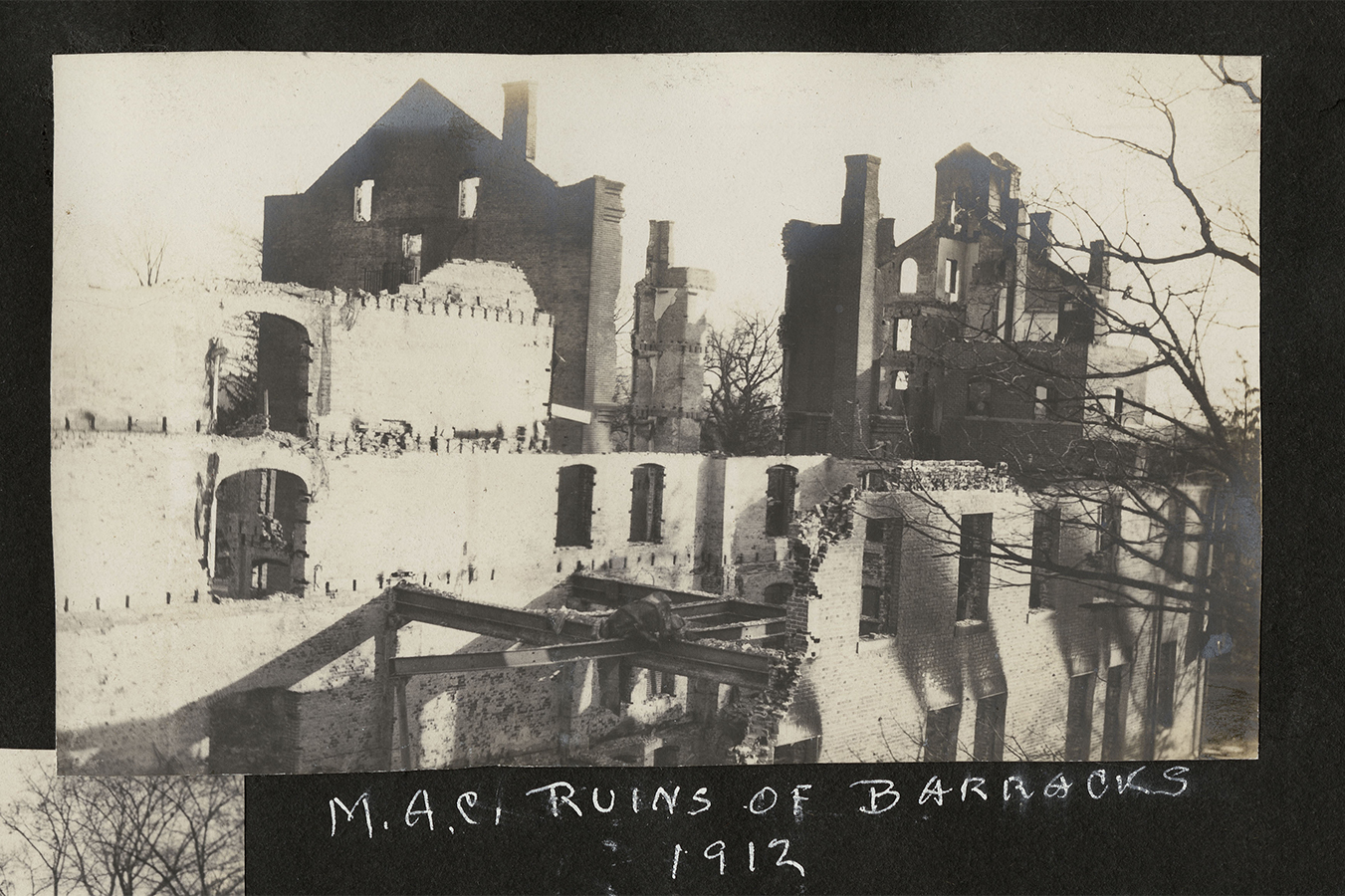 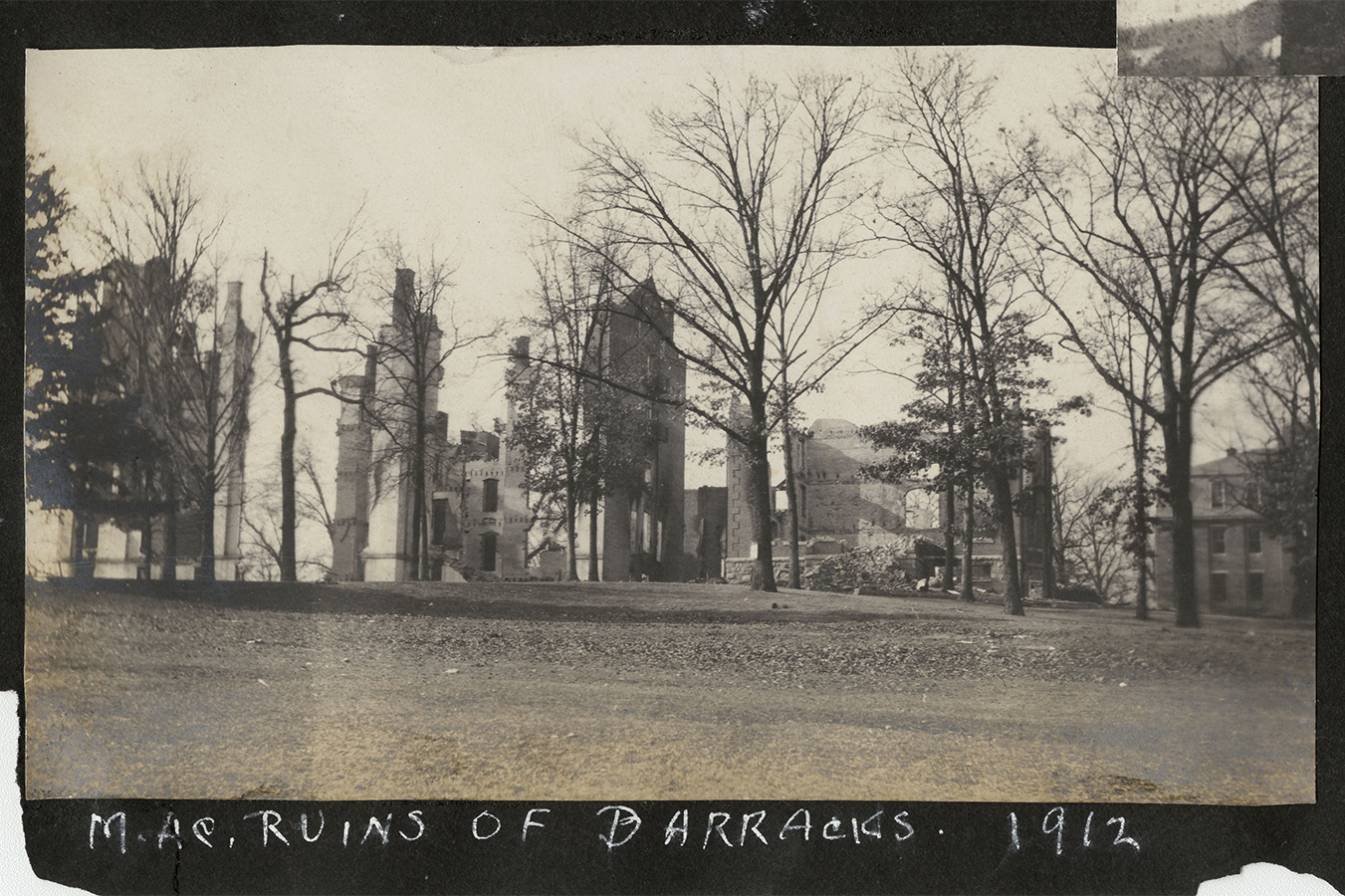 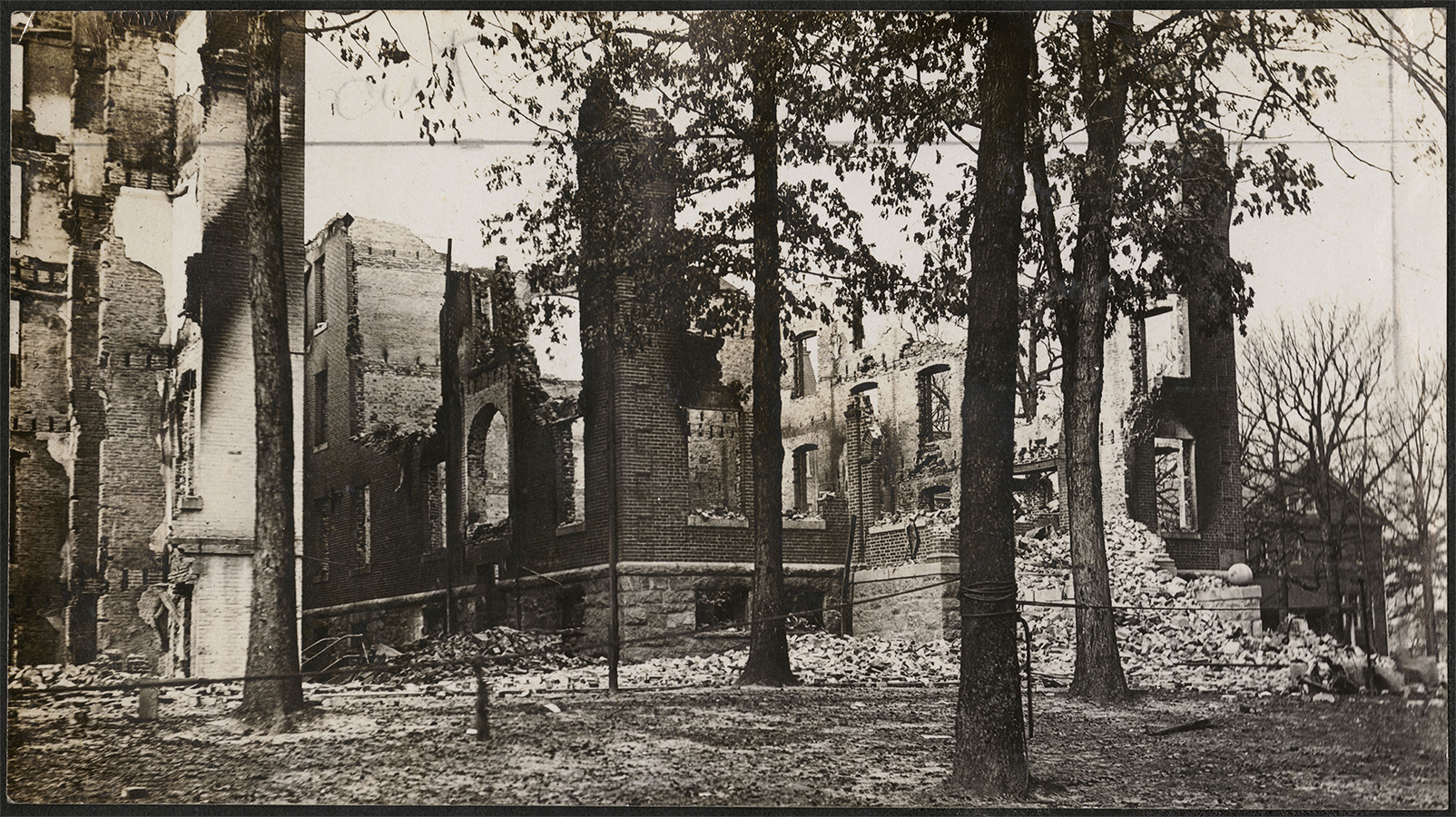 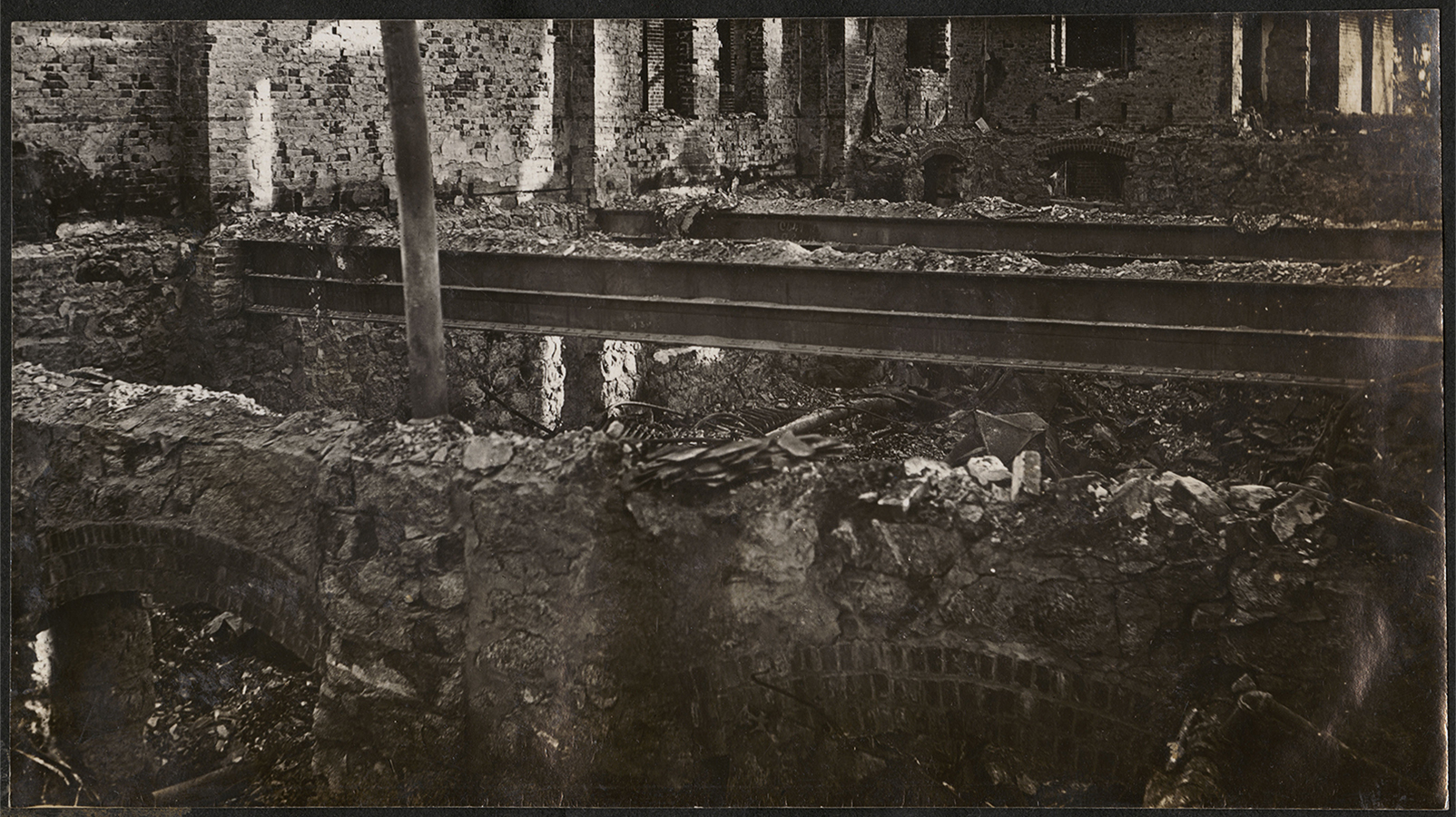 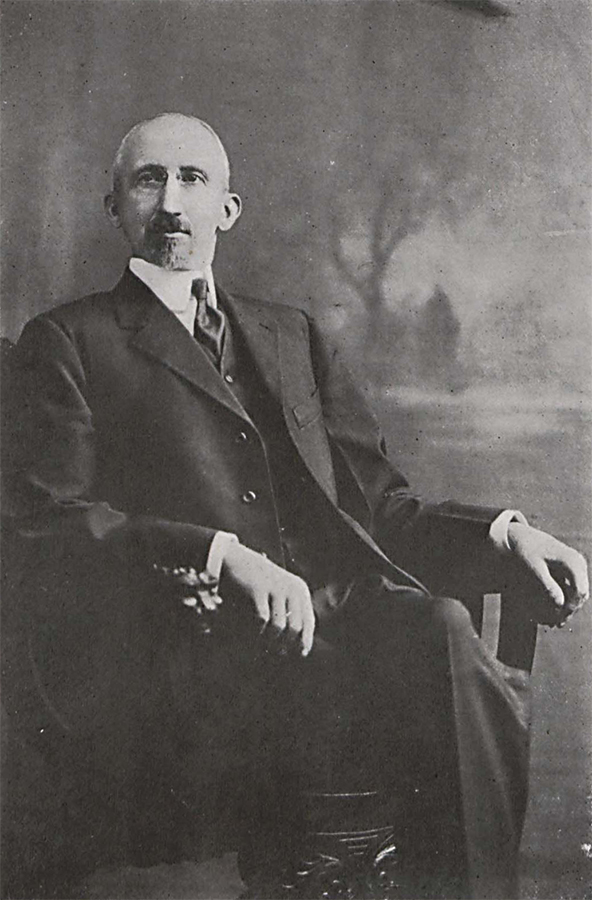 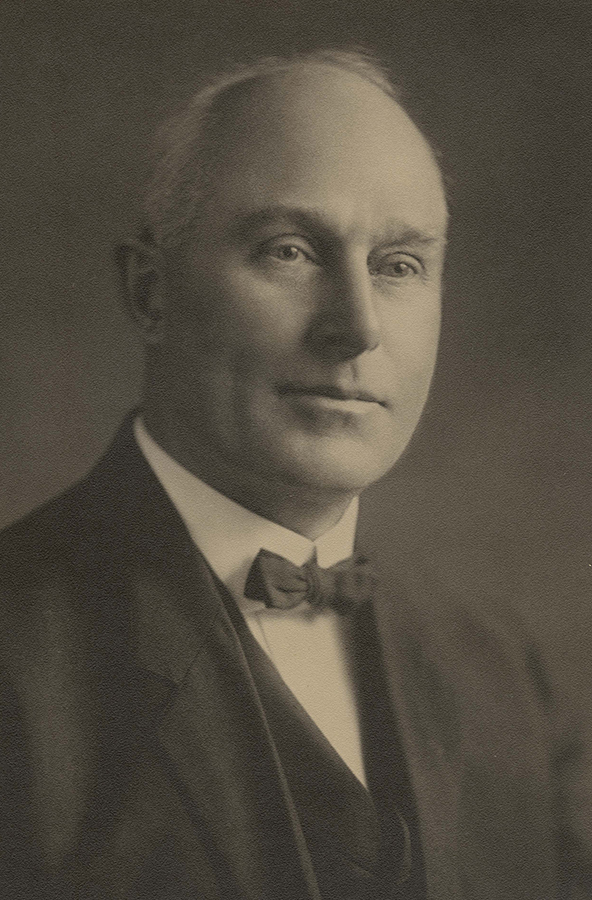 After Silvester resigned, Professor of Languages Thomas H. Spence, pictured left, served as interim President until Harry J. Patterson, pictured right, took office in 1913. Patterson guided the campus's major resurgence after the fire's devastation. During his presidency, which lasted until 1917, he oversaw the transition from M.A.C. to Maryland State College of Agriculture and supported the enrollment of the institution's first female students. Spence image from 1918 Reveille, UPUB S36.001; Patterson image from University of Maryland Biographical File, Acc. 14621.