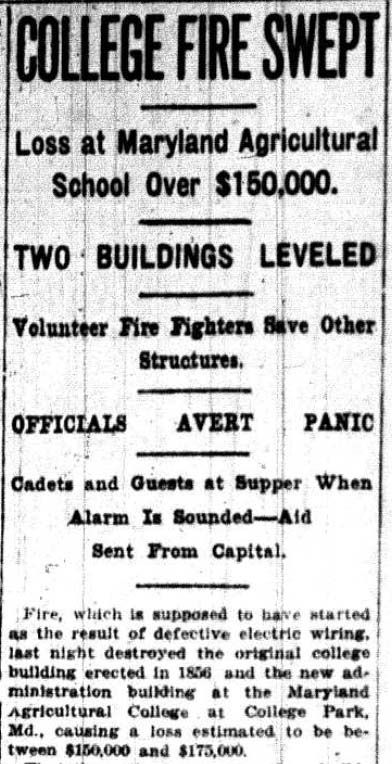 Loss at Maryland Agricultural School over $150,000

Volunteer Fire Fighters Save Other Structures

Fire, which is supposed to have started as the result of defective electric wiring, last night destroyed the original college building erected in 1856 and the new administration building at the Maryland Agricultural College at College Park, Md., causing a loss estimated to be between $150,000 and $175,000.

That the entire group of college buildings was not destroyed was due to the diligent efforts of the Hyattsville fire company, scores of the college cadets and officials and residents of College Park. Two engine companies from the city were rushed on a special train to the scene, but arrived too late to save the doomed buildings. The loss caused by the fire is said to be practically covered by insurance.

The fire was discovered about 10:30 o'clock in the attic of the administration building. The Thanksgiving dance of the Rossberg Club, composed of cadets of the college, was in progress in the old college building adjoining at the time. The cadets and their guests were in the mess hall in the basement of the building at supper when the flames were discovered.

At the cry of "Fire!" a rush was made for the doors and a panic was averted by the assurance from the officials of the college that there was no danger. As soon as the cadets had escorted their guests from the old building they dashed into the administration building adjoining and began fighting the flames. Only about forty of the 250 students of the college were on hand, the majority of them having returned to their homes during the Thanksgiving holiday, which lasts until Monday.

It was soon seen that it would be impossible to get control of the flames, and the cadets accordingly turned their attention to saving the contents of the rooms in the other portions of the buildings. Most of the valuable records of the college in the offices of President R.W. Silvester and Treasurer Ford were saved, as well as many articles of furniture. The students remaining at the college during the holiday saved most of their clothing and other personal property, but the contents of most of the dormitory rooms were lost.

While the cadets were fighting the flames with hand apparatus and a single hose from a hydrant in the basement of the building the volunteer fire department of Hyattsville of about twenty members reached the college. The run from Hyattsville to the college was made in record time, the apparatus having been attached to the rear of the automobile of J. Frank Rushe.

By the time the volunteer firemen arrived at the scene the administration building was a mass of flames and the old college building adjoining was afire. With an inadequate water supply the saving of the historic structure was impossible. It sufficed, however, to save Science Hall, located about 100 feet from the new building, which was in imminent danger several times.

When the news of the fire reached Washington fire headquarters immediately made arrangements with the Baltimore and Ohio railroad for the transportation of the two engines. The order delegating engines Nos. 3 and 12 came in at 11:30 o'clock, and the engines, loaded on two gondolas, with an extra box car for equipment, left at 11:45 o'clock.

The Washington firemen did not arrive at the college until well after midnight. The old building and the administration building were wrecked by that time. When they felt certain that there was no danger of the fire spreading to the other college buildings the local fire fighters returned to this city.

A few minutes after 10 o'clock this morning the walls of the original college building collapsed and with a crash that was heard a long distance off, fell into a heap. There was no wind blowing at the time and just what caused the walls to fall is not known. Fortunately no one was close to the ruins at the time.

The new administration building was erected in 1905, under an act of the Maryland legislature, and cost approximately $75,000, including equipment and furniture. In this building was located the offices of the president and treasurer, and the room for the meetings of the trustees of the institution, and assembly hall, in which commencement exercises and social functions were held was in this building.

The upper floor was devoted to dormitories. In the old building was located the commandant's quarters, mess hall and study rooms, as well as quarters for a few of the professors and their families. The latter lost most of their furniture and other effects.

Recess May Be Declared.

It is probable that a recess will be declared at the college until after the Christmas holidays, President Silvester said today. This will enable the college authorities to procure living quarters in residences nearby for the study body during the remainder of the school session.

In the other buildings of the college group, which include electrical, mechanical, civil engineering, chemistry buildings, a gymnasium and library, science hall and hospital, study rooms and lecture halls will be arranged so that there will be no changes in the courses of study. As soon as the insurance can be adjusted plans will be started for the erection of new buildings to take the place of those destroyed by the fire. It is probable that a high-pressure water supply also will be provided at the same time.

The original college building, often referred to as the "barracks," was erected on property donated by Charles B. Calvert, a direct descendant of Lord Baltimore, who died in 1860. Mr. Calvert owned practically all of what is now called Riverdale, and gave the land as his subscription to a fund to erect a private school for the dissemination of agricultural knowledge.

The barracks was erected by the late District Inspector of Buildings Entwisle in the days when he was engaged in the contracting business. It was started in 1854, when there was no idea of enlarging the scope of the work of the school, but several years later prominent agriculturalists of Maryland bought stock and the plant was enlarged. The state of Maryland became interested in the institution, and at each session of the legislature appropriated sums for its maintenance. About $9,000 is appropriated each year. The college also received an annual appropriation from the federal government under the Morrill act.