The Mystery of Carolyn Keene

The question of who wrote the Nancy Drew books was a mystery for many years. Although Edward Stratemeyer created the characters and synopsis for the first few Nancy Drew books, he did not write them himself, and the actual writers agreed not to reveal their names. We now know that Mildred A. Wirt was the ghostwriter “Carolyn Keene” for 23 of the first 30 Nancy Drew books. (Mildred was born Mildred Augustine and married men named Wirt and Benson.)

Mildred Wirt Benson (1905-2002) was herself an independent, resourceful woman and she endowed Nancy and many of her other heroines with these same qualities. It is these strong and vivid characteristics of Nancy Drew that made her so beloved of readers and still wildly popular after 75 years.

Mildred Wirt Benson respected the oath of silence she had agreed to with Edward Stratemeyer until the 1980 trial of a lawsuit brought by Grosset & Dunlap against the Stratemeyer Syndicate. Even afterwards, news of her identity as the original Carolyn Keene did not become widely known until the Nancy Drew Conference of 1993 at the University of Iowa. 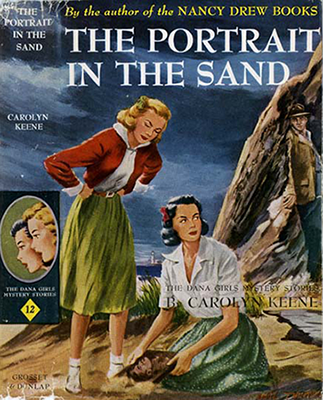 Works under the Pseudonym 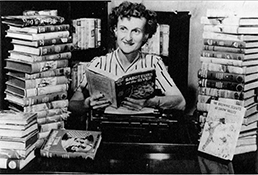 Mildred Wirt Benson surrounded by many of the books she has written. 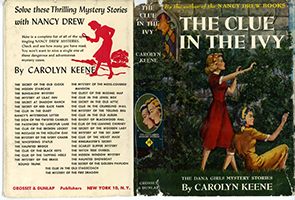 The Dana Girls was another Stratemeyer series that used the pseudonym Carolyn Keene to cash in on the popularity of Nancy Drew. Leslie McFarlane wrote the first four volumes; Benson wrote volumes 5 through 16; Harriet Stratemeyer Adams and other ghostwriters continued the series. 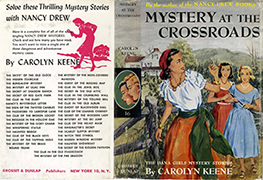 Jean and Louisa Dana are orphaned sisters sixteen and seventeen years old. They live with their Uncle Ned and Aunt Harriet and attend Starhurst boarding school while they solve mysteries. 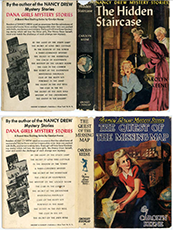 Nancy Drew became the ideal of the independent woman that readers wanted to be themselves. Mildred Wirt Benson herself realized this when she stated:

“It seems to me that Nancy was popular, and remains so, primarily because she personifies the dream image which exists within most teenagers. Definitely, Nancy had all the qualities lacking in her author. She was good-looking, had an oversupply of college dates, and enjoyed great personal freedom. She never lost an athletic contest and was far smarter than adults with whom she associated. Leisure time was spent living dangerously. She avoided all household tasks and, indeed, might rate as a pioneer of Women’s Lib.” 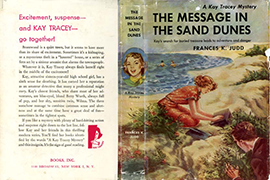 Like Nancy Drew, Kay Tracey has one parent—her widowed mother. Her cousin Bill, a lawyer, also lives with them. Her friends Betty and Wilma Worth help her solve mysteries which often involve missing inheritances or fortunes.

This Stratemeyer series was written under the pseudonym Frances K. Judd. Benson wrote volumes 3 through 14. 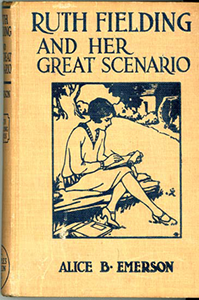 Edward Stratemeyer first hired Mildred Wirt Benson to write volume 23 of the Ruth Fielding series, Ruth Fielding and Her Great Scenario, in 1927, several years before he gave her the Nancy Drew books to write. 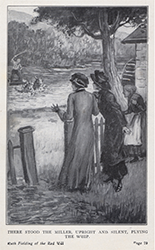 Ruth Fielding is an orphan who becomes a successful detective, movie writer, actress, and director. The decline in popularity of the books as Ruth Fielding marries and grows older may have convinced Stratemeyer to keep his heroines ageless. 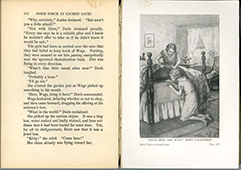 Under the pseudonym of Julia K. Duncan, Mildred Wirt Benson wrote Doris Force at Locked Gates and Doris Force at Cloudy Cove, the first two books in this four volume series, for the Stratemeyer Syndicate.

Doris Force is an orphan with a beautiful voice who wants to be an opera singer. 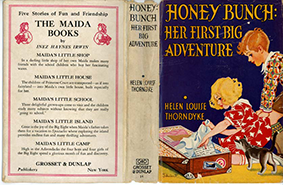 Honey Bunch was one of the most popular Stratemeyer girls’ series. It was written under the pseudonym Helen Louise Thorndyke and was aimed at younger children. Josephine Lawrence wrote the first 16 volumes starting in 1923. Benson wrote volumes 18-22.