Modern girls’ series books evolved in part from the genre of “girls’ stories” that became popular in the nineteenth century, especially Louisa May Alcott’s novel Little Women and her other books featuring young female heroines.

The first series books for children were the Rollo stories written by Jacob Abbott first published in 1835. Jacob Abbott’s subsequent Lucy series was the first girls’ series. The short, inexpensive dime novels of the nineteenth century were another antecedent of girls’ series books as were the many series adventure books by Oliver Optic and the “rags to riches” stories of Horatio Alger.

Many of the popular girls’ series books of the nineteenth century featured domestic or religious themes and include the Little Prudy, Elsie Dinsmore, and Five Little Peppers series. 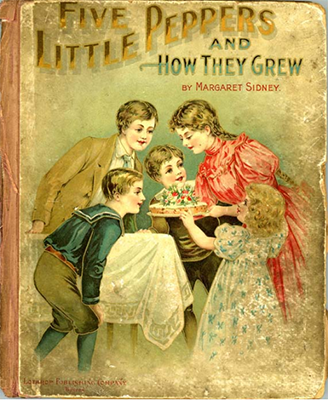 “Series Books” versus “Books in a Series” 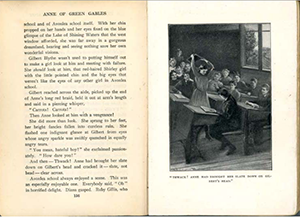 Sherrie Inness has made a distinction between “series books” and “books in a series” which often have a higher literary reputation than series books. In “books in a series”, the heroine grows older, matures, and gets married; in addition, the books are set in actual geographic locations and there is much more character development. Anne of Green Gables, The Little House on the Prairie series by Laura Ingalls Wilder, and the Betsy Tacy books by Maud Hart Lovelace are examples of “books in a series.” 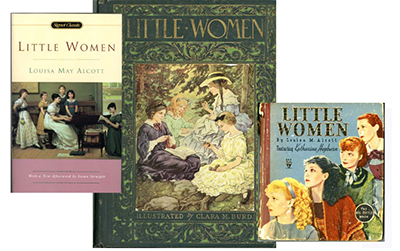 The enduring popularity of the Little Women books is demonstrated in the many editions of Alcott’s books that have been published over the years. 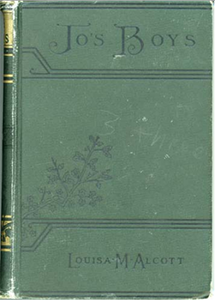 Louisa May Alcott's publisher, Thomas Niles, asked her to write a book for girls. This prompted her to write Little Women in 1868. This book was an immediate success and she published several sequels including Little Men and Jo's Boys.

This first edition and many of the Alcott books in this case are from the Carolyn Davis Collection of Louisa May Alcott books available in the University of Maryland Libraries Special Collections. 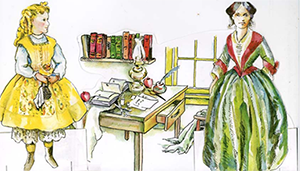 Paper dolls based on Alcott's Little Women attest to the continuing popularity of the book. 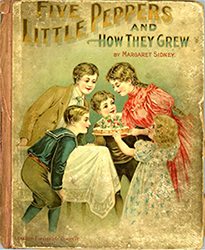 The Five Little Peppers and How They Grew is the first book in this popular series featuring a poor, but happy family.