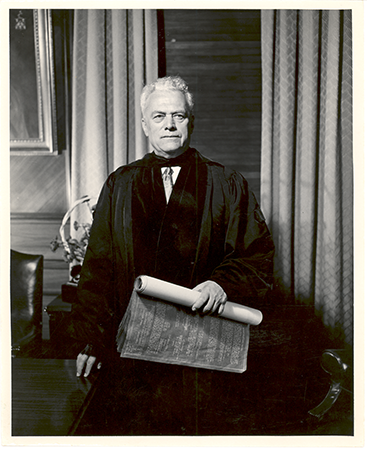 The University of Maryland had never experienced such a building boom as that that occurred under the leadership of Harry Clifton Byrd. He oversaw the construction of more than sixty buildings, large and small, pouring over architects’ plans down to the smallest details and often clambering over piles of lumber and brick on job sites, as his beloved alma mater sprang to life. The university erected eighteen dormitories and twenty-three major buildings at College Park during Byrd’s presidency, including such landmarks as Main Administration, Byrd Stadium, the Glenn L. Martin Institute of Technology complex, Reckord Armory, Francis Scott Key Hall, the Wind Tunnel, Symons Hall, and Memorial Chapel. In addition, Byrd was the catalyst for the construction of the Cole Student Activities Building, better known as Cole Field House, and the Stamp Student Union, although both structures were completed after his resignation.

Although Byrd’s main focus was the College Park campus, he also oversaw construction projects for the university’s professional schools in Baltimore and at the Princess Anne Academy, now known as the University of Maryland Eastern Shore. University Hospital and several other major buildings were completed at a cost of almost $7 million, and the university added gymnasium, agricultural, and administration buildings, a heating plant, and dormitories to the Princess Anne campus, expending an additional $1.7 million on those facilities. 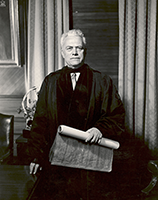 Byrd in the President’s Office in Main Administration in academic regalia, roll of architectural drawings in hand.

Photo by Al Danegger, from the personal papers of Harry Clifton Byrd. 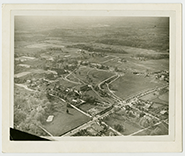 Aerial shot of the campus, c. 1931, approximately four years before Byrd became acting president. At the right is a portion of the oval track inside the original Byrd Stadium, which was located on the site of today’s Fraternity Row. Toward the center of the photograph, sitting up on a small hill, is Annapolis Hall. The university razed this structure in 1986 and constructed the present Annapolis Hall in the same location. 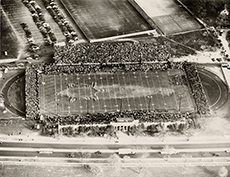 The first Byrd Stadium, located on the site of what is now Fraternity Row, on Homecoming game day, November 1, 1947.

Photo by Wendell H. Moore, from the Leland Scott Collection. 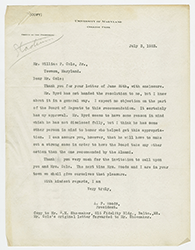 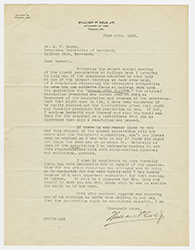 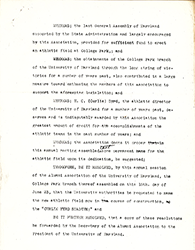 The Alumni Association unanimously recommended naming the new football stadium for Harry Clifton Byrd during its 1923 annual meeting and communicated its decision to University of Maryland President Albert F. Woods shortly after passage of the resolution. 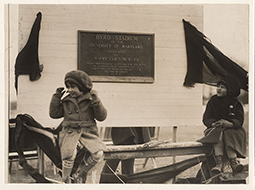 From the personal papers of Harry Clifton Byrd.

Track practice at the original Byrd Stadium, dedicated in 1923, which stood on the site of today’s Fraternity Row.

From the Records of Athletic Media Relations. 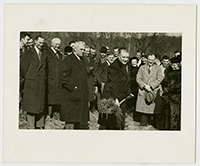 Byrd with assembled dignitaries at the ground-breaking ceremony for the administration building. 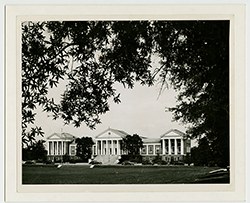 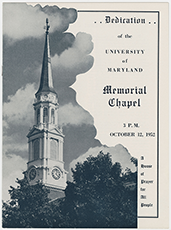 Program from the dedication of Memorial Chapel. When Byrd could not find a suitable hymn to use during the dedication ceremony, he wrote one himself. Somerset Hall (left) and Queen Anne’s Hall (right), two of the dormitories constructed during Byrd’s presidency; both facilities opened in 1949.

Photo by Al Danegger, from the University Archives photograph collection. 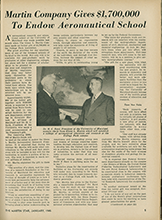 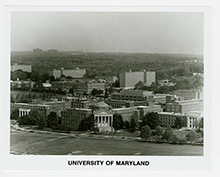 Harry Clifton Byrd fought hard for the expansion of the College Park campus, constantly seeking funding from private donors and the state’s coffers. Glenn L. Martin’s gift of $1.7 million in 1944 was one of the largest donations the university received during Byrd’s tenure; it led to the construction of a complex of eight buildings, known as the Glenn L. Martin Institute of Technology, which was officially dedicated on March 25, 1955.

From the Martin Star, January 1945, and the records of the Office of Institutional Advancement. 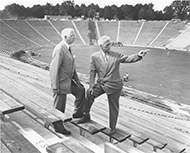 Byrd took great pride in the construction of the new football stadium that was to bear his name, and he was involved in many details of the project. Here he shows Judge William P. Cole, Jr., chair of the Board of Regents, around the facility as it nears completion. 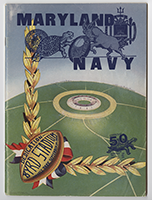 Program and ticket stub from the first game in Maryland Stadium, then known as Byrd Stadium, September 30, 1950. 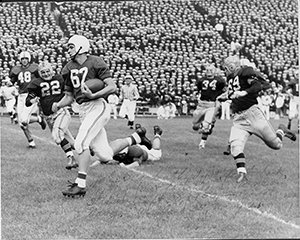 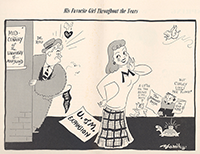 This cartoon from the student magazine Old Line in 1951 captures Byrd’s devotion to campus expansion while playing on his reputed fondness for Maryland co-eds.