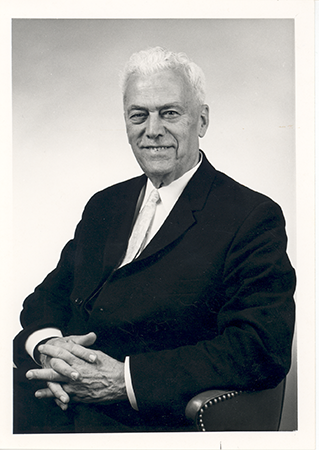 The end of Harry Clifton Byrd’s tenure at the University of Maryland was tumultuous and emotional. On June 26, 1953, Byrd obliquely announced his intention to resign from the presidency in a letter addressed to Judge William P. Cole, Jr., chair of the Board of Regents. Byrd urged the Board to “appoint a special committee to consider available men throughout the country who fit, as nearly as possible, the requirements of the presidency of the University of Maryland,” making this proposal “in order to provide for an orderly change in administration.” Byrd stated that it was “not my intention ever to retire in the sense of discontinuing work” and that “the University of Maryland has been my life and to think of leaving it seems to be one of those things that simply do not happen.”

The regents accepted Byrd’s letter and appointed a committee to seek his successor. The committee recommended that Byrd be given the title President Emeritus as of January 1, 1954, and asked Dr. Thomas B. Symons, who had recently retired as dean of the College of Agriculture and director of the Cooperative Extension Service, to serve as acting president. The search committee also called upon Byrd to write a comprehensive history of the university and proposed allowing him to continue on his university salary until December 31, 1954. The salary matter later became quite contentious, and Byrd eventually officially retired on July 1, 1954. He also objected to the regents’ request that he write a history of the university, and this idea disappeared from view. 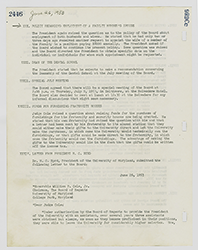 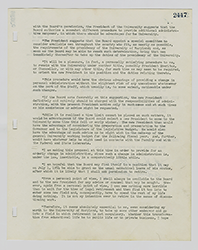 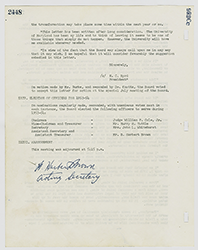 From the minutes of the Board of Regents. 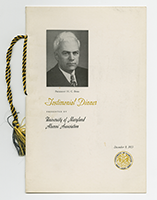 Byrd’s departure after almost 50 years at his alma mater was very emotional, both for him and for members of the university community. The Alumni Association held an enormous dinner in his honor in Baltimore on December 9, 1953, and other tributes poured in.

Volume of testimonial letters from the Alumni Association dinner, December 9, 1953. Over 200 letters fill the volume, including one from alumnus T. Edgie Russell, Jr., who writes Byrd that “the University of Maryland will stand on the hill at College Park as an everlasting tribute to your untiring efforts and guiding genius.” 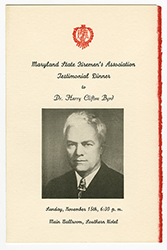 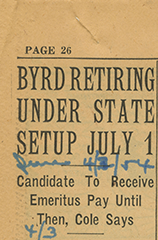 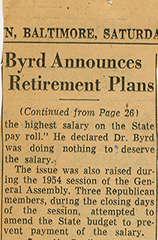 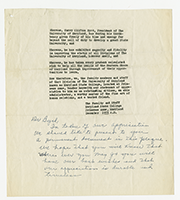 Resolution honoring Byrd’s accomplishments from the faculty and staff of the Maryland State College, now the Eastern Shore campus of the University System of Maryland. One of the most contentious issues of Byrd’s presidency was the provision of education for African-American students, so this recognition from a predominantly African-American campus is particularly noteworthy.

From the personal papers of Harry Clifton Byrd. 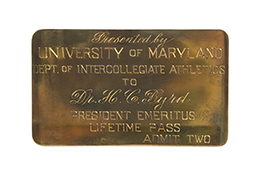 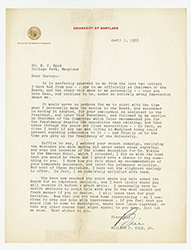 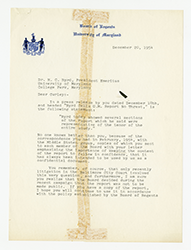 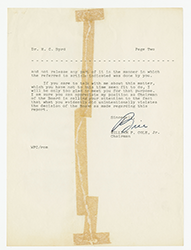 Byrd fought bitterly with the Board of Regents following his resignation, and his release of portions of the confidential Middle States Association evaluation report led to a sharp reprimand from Chairman Cole. Cole later tried to rekindle their close relationship, calling on Byrd to remember his friendship and support for more than forty years. 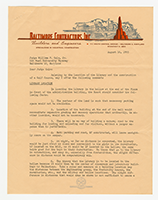 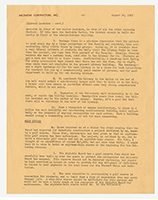 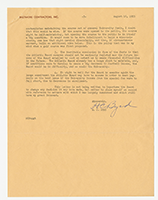 Byrd remained deeply concerned with university affairs after his resignation, often commenting verbally or in correspondence on plans for and events on campus. Here he outlines in detail for Judge William P. Cole, Jr., the chair of the Board of Regents, his ideas for the proper location of a new library building and the suitable size for the golf course the university was proposing to build. This letter, dated August 16, 1955, came from Byrd more than eighteen months after his departure from campus.

From the records of the Board of Regents. 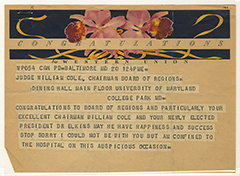 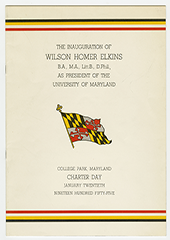 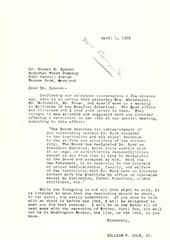 Byrd graciously congratulated the Board of Regents and new University of Maryland President Wilson H. Elkins by telegram at Elkins’ inauguration on January 20, 1955. Several months later, the Board was considering how to handle Byrd’s continuing involvement with the campus, Chairman Cole telling regent Thomas B. Symons in April 1955 that:

"with the new president, it is essential in the interest of proper administration, faculty, and welfare of the institution that Dr. Byrd have no intimate contact with the Institute by office or otherwise except by invitation, formal functions, alumni activities, etc."

From the records of the Board of Regents. 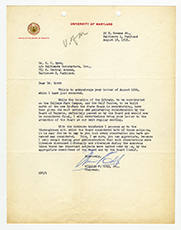 Judge Cole’s response to Byrd’s suggestions regarding the placement of the library and the golf course.