People in Connecting the Dots 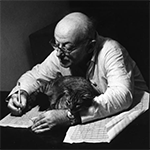 American musicologist and reference librarian in the Music Division at the Library of Congress (1939–1961). Editor-in-Chief of Notes (1943–1961) and first president of the International Association for Music Libraries (1951–1955). Addressed in Notes correspondence as "Dick."