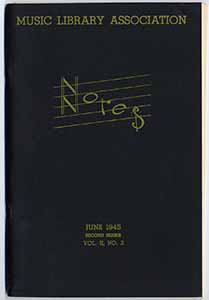 Each Notes review began with a solicitation: a Notes staff member contacted a friend or colleague, a writer contacted the staff, or a book or music publishing company sent news to Notes about a newly published work.

Henry Cowell's relationship with Notes as a reviewer began when the book publisher Thomas Y. Crowell contacted Richard Hill, Editor-in-Chief of Notes, on April 19, 1945. The musicologist Nicolas Slonimsky wrote a new book: The Music of Latin America. Richard Hill then asked Henry if he would write the review, a draft was sent and edited, and then the issue went off to the printer.

Nicolas Slonimsky (1894–1995) was a Russian-born musicologist, lexicographer, conductor, pianist, and composer. He emigrated to the United States in 1923.