No new voting rights amendments have been added to the Constitution since the passage of the 26th amendment. Congress has passed a variety of legislation to improve equity and access to voter registration processes and to standardize and modernize voting systems and methods. However, in 2013, the Supreme Court ruled that Section 4 of the Voting Rights Act was unconstitutional. This amendment allows states to make changes to their voting laws more freely, removing protections for the most vulnerable groups and essentially undermines the integrity of the entire act.

Even as voting access has been expanded in many places, state laws have been passed that allow massive purges of voter rolls and lifetime disenfranchisement for people who have been convicted of felonies. In response to laws that disenfranchise specific groups of voters, activists work to combat gerrymandering, restrictive voter ID laws, unequal access to polling places, inadequate voting technology, and the lack of representation of non-citizen residents of the United States.

Explore recent news coverage of voting rights issues related to redistricting and gerrymandering, the 2000 election controversies, voter registration laws, lowering the voting age, the reauthorization and constitutionality of the Voting Rights Act, and voting in 2020. 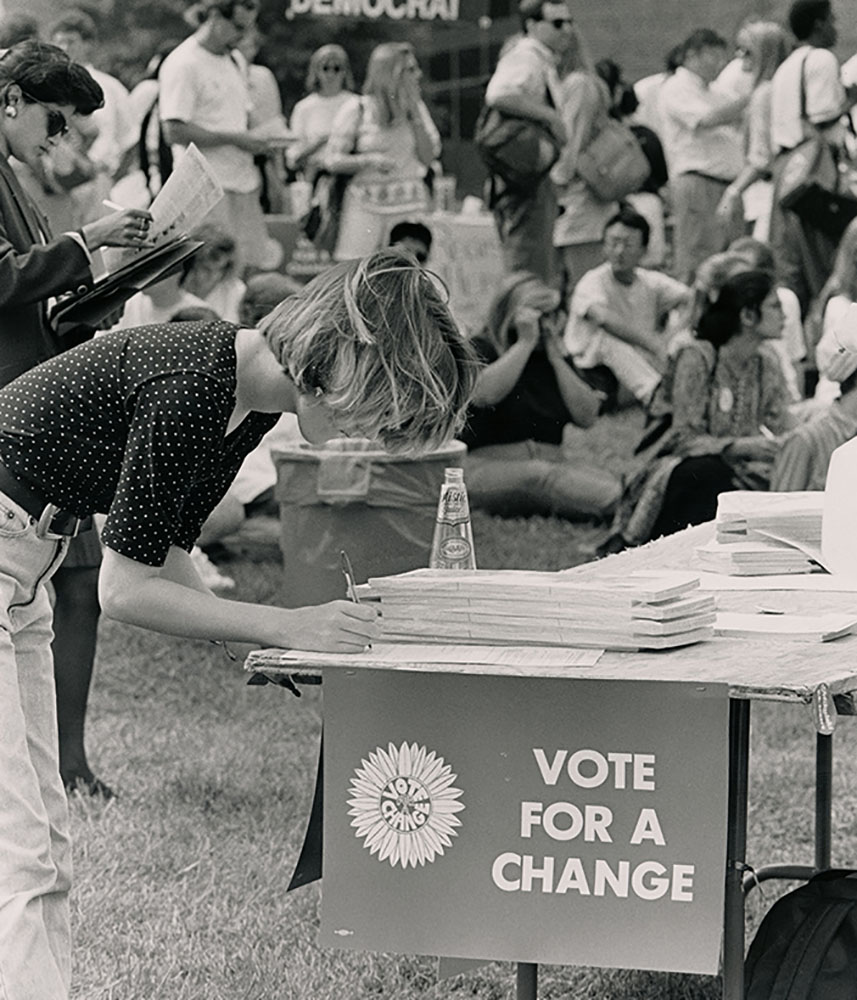 Following the 2020 election, questions over election security, debates about voter restrictions, and politicians refusing to accept the results of the national election stoked fear and anger among many Americans. This nation remains deeply divided and future elections seem poised to involve fierce debates over electoral ethics.

Not a coup, but something new: UMD professors decipher Trump’s post-election actions
The Diamondback, 17 November 2020.

Shaye Moss staffed an election office in Georgia. Then she was targeted by Trump
National Public Library, 22 June 2022.

Our most recent election took place amidst a pandemic and intense social protests. We awaited the results of our election for days and many of us voted in ways we never had before. Voting in general, voting by mail and early voting saw massive and historic increases. Debates raged throughout the year as parties fought to defend the mechanisms they believed would ensure the most fair election possible. The questions and issues that arose this year will likely influence our electoral system for many years to come.

Now is the time to unify and streamline state election laws
The Diamondback, 8 November 2020
University Publications

As the presidential election nears, some UMD students are wary of mail-in voting
The Diamondback, 18 September 2020
University Publications

Elections are crucial to democracy. We need vote-by-mail to protect them
The Diamondback, 29 April 2020
University Publications

Despite the protections provided by the Voting Rights Act, redistricting and gerrymandering continue to be a way to effectively disenfranchise and suppress the voting power of marginalized communities. Lawsuits addressing concerns of unfair and unlawful redistricting, often referred to as gerrymandering, are regularly brought before state and federal courts, some enduring the long journey to be deliberated in the Supreme Court.

Florida has been a critical swing state for many years. In 2000, the election was so close that the entire outcome hinged on a few hundred votes in the state. The razor thin margin, accusations of intentional voter disenfranchisement and budding awareness of the disparity that can exist between the popular and electoral college votes led 2000 to be a wild election year that taught many Americans the ways our democratic institutions can fail to ensure the ideal of “one person, one vote”.

US Supreme Court's Decision to Stop Further Counting of Votes in Florida, Seen as an Apparent Victory for George W. Bush
Talk of the Nation, 13 December 2000
National Public Radio records

In recent decades, political leaders have pushed for national legislation to expand voter registration while others have made efforts to restrict registration, invoking fears of voter fraud. There are still many barriers to voter registration in some localities, making the process incredibly difficult for many Americans to demonstrate their eligibility to cast a ballot.

Should Felons be Allowed to Vote?
The Black Explosion, 26 December 2017
University Publications

Among expectations of record voter turnout, many people still cannot or will not vote
Capital News Service, 30 October 2020
University Publications

Some Maryland Legislators Want to Give Vote Back to Felons
Capital News Service, 26 October 2001
University Publications

Since the passage of the 24th amendment, not much national attention has been given to lowering the voting age beyond 18, but local governments have continued the debate. Proponents of more inclusive voting laws argue that teens are increasingly socially and politically active, are savvy and informed, and should be allowed to exercise the right to vote.

Unlikely Advocates Push To Give 16-Year-Olds A Vote - And A Voice
All Things Considered, 18 January 2016
National Public Library records

The Voting Rights Act: Its Reauthorization and Constitutionality

Because the Voting Rights Act (VRA) was created as a bill and not passed as an amendment to the Constitution, it regularly comes up for reauthorization by Congress. Some years have seen contentious debates and votes, while other years have seen the reauthorization pass easily with a majority of both Houses voting in support of the Act. Within the past decade, we saw an historical change as Section 4 of the VRA was deemed unconstitutional, impacting the ability of the Department of Justice to protect voters from new laws that place biased barriers between Americans and the ballot box.