Despite progress to expand the electorate following the passage of the 15th and 19th amendments, deliberate efforts to restrict access to the ballot continued throughout the country, especially in the South. In response, a number of grassroots organizations formed in an attempt to re-enfranchise marginalized populations, particularly African Americans.

The constitutional amendments only protected voters of discrimination in federal elections, not in primary and local elections. Local election laws varied greatly across the nation as many states found ways to legally restrict voting access by enacting laws, commonly called Jim Crow laws, that created barriers for specific groups of people, without explicitly naming race as the discriminatory factor. Overt expressions of fear over election mismanagement, voter fraud, and voter manipulation were common justifications for why such discriminatory laws were needed. States unevenly enforced these rules, including poll taxes, literacy tests, and grandfather clauses, requiring people of color to meet the harsh standards and allowing white people greater leniency. African American voters and their allies also faced extreme violence and prejudice when they attempted to register or protest unfair practices.

Individuals and grassroots organizations attempted to combat these laws by registering new voters and encouraging participation in elections. Some groups brought civil suits against states for their discriminatory laws, demanding equal access to the polls and protections for all voters. This period is marked by extreme prejudice and a backward slide from progress that had been made with the passage of previous amendments protecting voter rights. 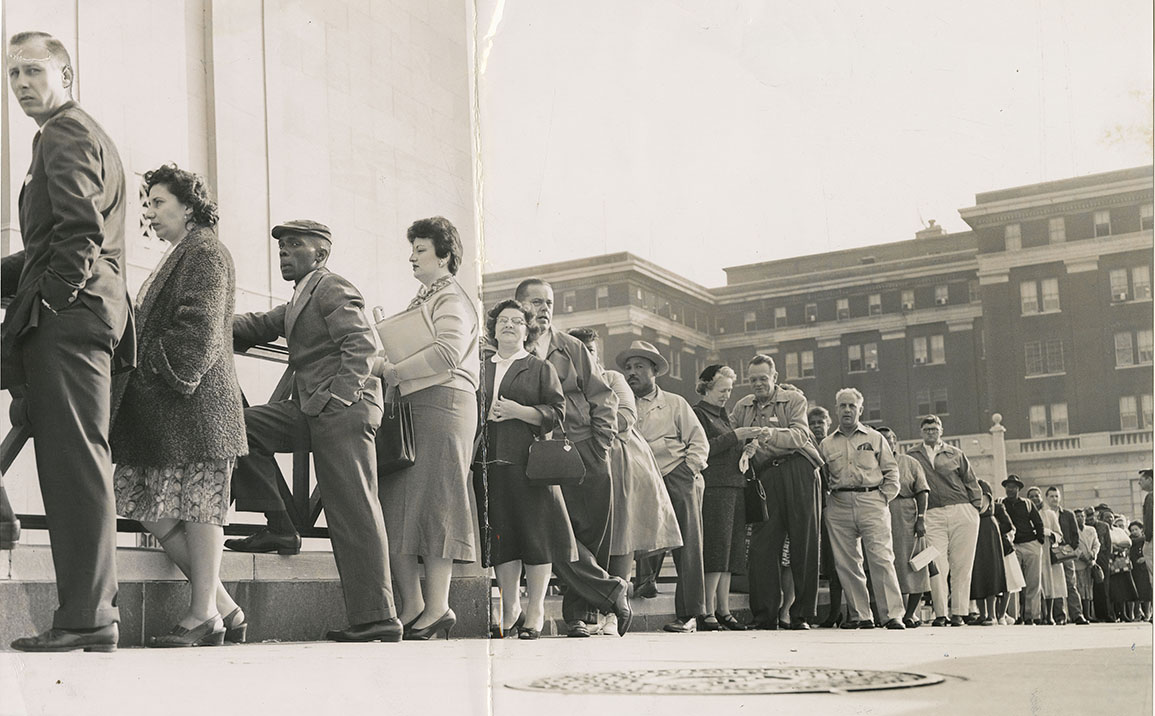 This is a set of questions and answers to a Jefferson County literacy test. This style of literacy test, which required potential voters to answer questions about civics and government, was popular in 1960s Alabama.

Elsewhere, literacy tests took other forms; for example, some tests asked voters to interpret a passage of the Constitution, while others presented more absurd challenges like “spell backwards, forwards,” or draw a difficult shape. 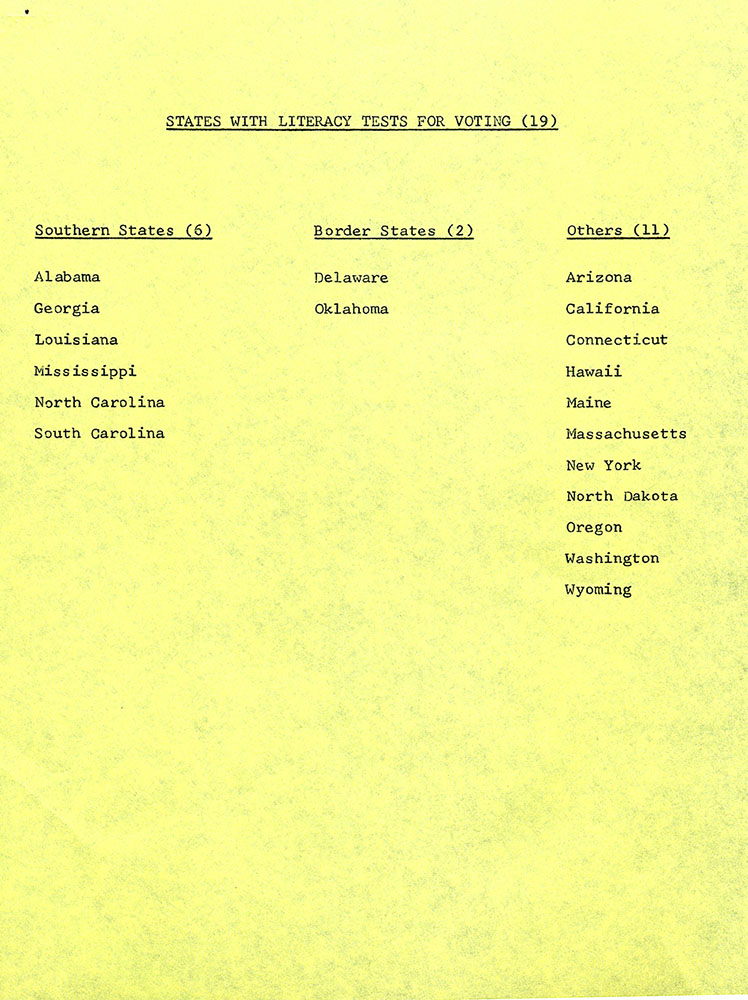 Poll taxes were one of the primary disenfranchising agents of Black Americans before the passage of the Voting Rights Act, along with literacy tests and intimidation. In order to ensure that poll taxes were indeed able to exclude voters based solely on race, many Southern states included a “grandfather clause” in their registration process that allowed voters to register as long as their grandfathers had the right to vote. This rule allowed poor whites to vote but excluded many Black voters, whose grandfathers may have been enslaved or otherwise legally barred from voting. Today, poll taxes exist in newer forms. For example, a 2019 Florida bill requires former felons to pay all fees and fines related to their sentence before they are allowed to vote in the state. 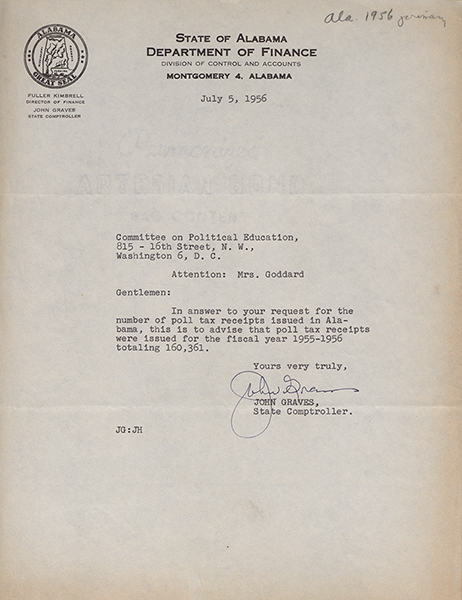 Redistricting is a process that often occurs after census data indicates a need to reallocate political representation based on population. Gerrymandering is a term used when sprawling, disconnected or oddly shaped districts are created in order to grant power to one political party over another. The term was first used in the early 1800s after Elbridge Gerry drew his district in such a way that favored one political party over another.

This article describes an egregious attempt by political officials in Alabama to void Black votes by gerrymandering the district. The state legislature redrew Tuskegee city limits to divide the city in half and cut out 410 of the city’s 420 Black voters in an attempt to silence their voices.

The article quotes a Tuskegee city councilman as saying

“It’s a matter of self-preservation; Negroes were about to out-vote us and take over control of our city.”

Some state senators fought to abolish entire counties, including Macon county, to silence Black votes on a larger scale. 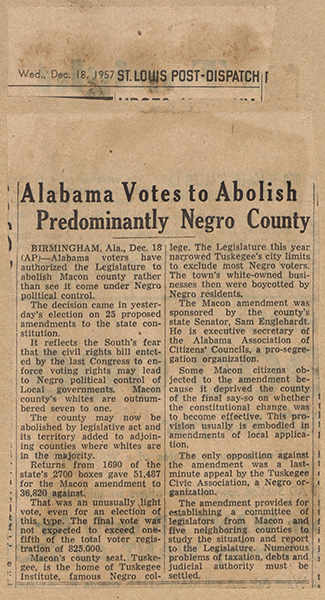 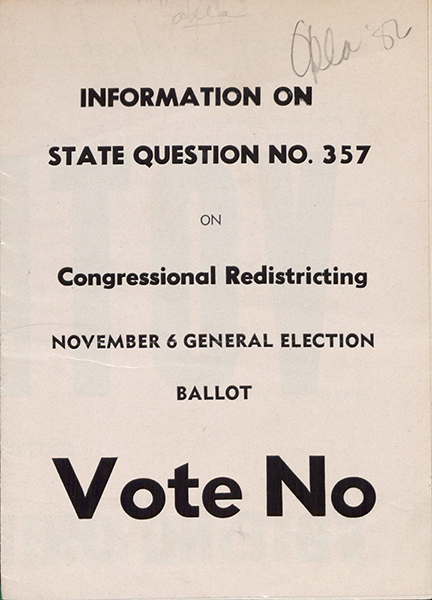 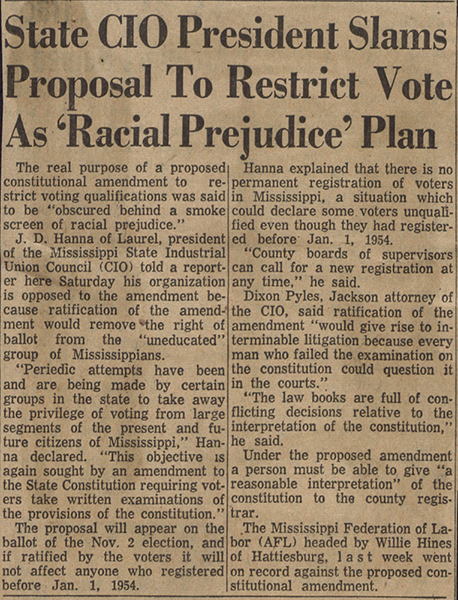 Other means of disenfranchisement

These items contain additional information on the ways in which people from marginalized groups were subject to different rules and requirements that impacted their ability to register to vote and cast a ballot.

These articles are part of a scrapbook labeled “Disenfranchisement” containing hundreds of articles, mostly about the proposed Poe Amendment of 1905. This amendment would introduce a “grandfather clause” and “understanding test” into the Maryland state constitution.

The amendment was advocated for using explicitly racist rhetoric, with the creators and proponents motivated to exclude African American men from the electorate. Ultimately, voters rejected the amendment, but only because it also disenfranchised many European immigrants. 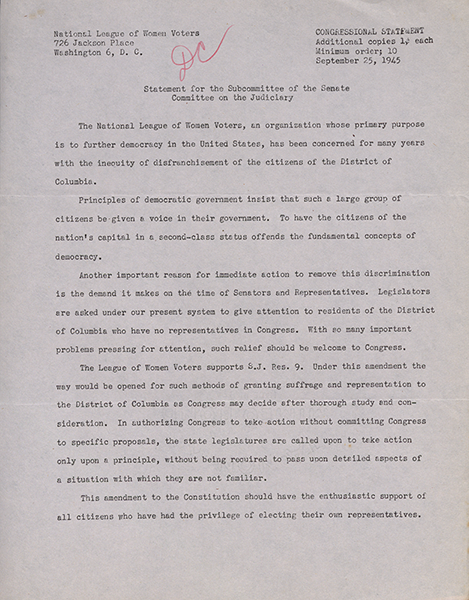 In this statement, the League of Women Voters voices concerns about the disenfranchisement of D.C. citizens. They ask for expanded voting rights and representation in Congress for D.C. citizens and argue that the District of Columbia’s lack of such rights

“offends the fundamental concepts of democracy.”

Seventy-five years later, D.C. citizens are still unrepresented in the Senate and represented by a single delegate in the House. They earned the right to vote in Presidential elections in 1961 with the 23rd Amendment, which grants them Electoral College votes according to their population but does not allow the number of their electoral votes to exceed that of the smallest state. 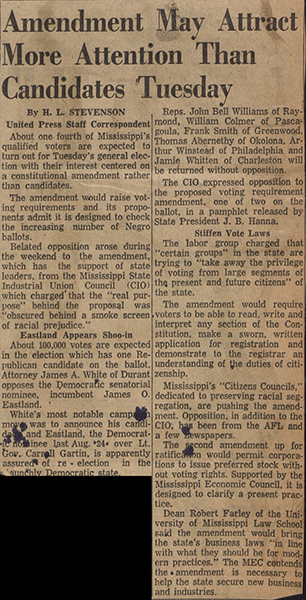 “Your November Vote Could Be Your Last”
Mississippi, 1954.
AFL-CIO Civil Rights Department records 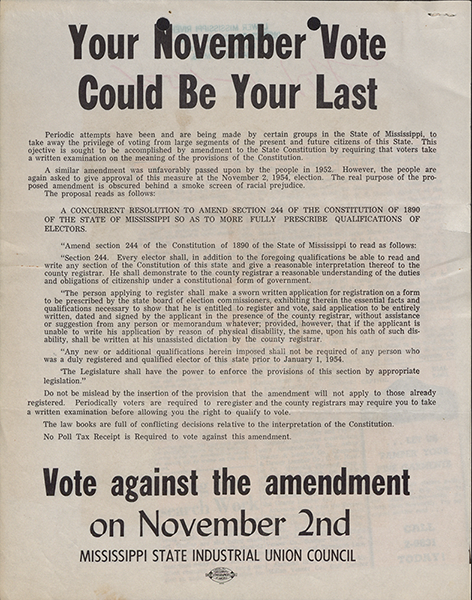 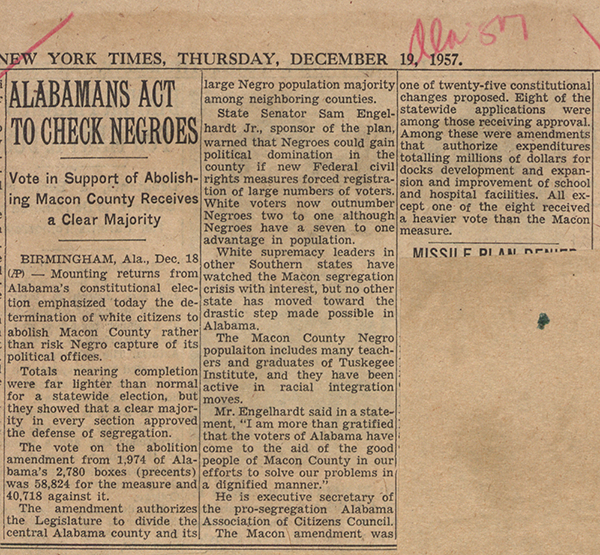 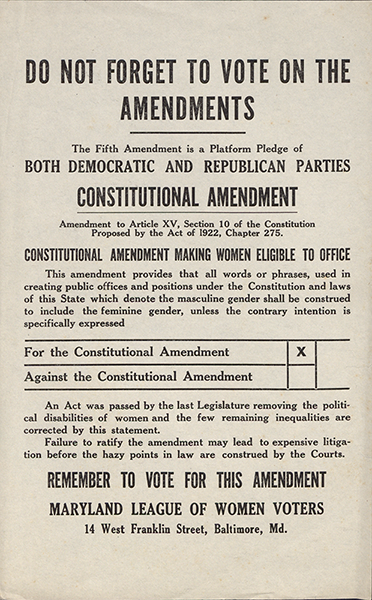 NEXT SECTION: Civil Rights and the Voting Rights Act