"No voting qualification or prerequisite to voting, or standard, practice, or procedure shall be imposed or applied by any State or political subdivision to deny or abridge the right of any citizen of the United States to vote on account of race or color”

- Section 2 of the Voting Rights Act -

For decades, people of color and other marginalized groups were denied the right to vote and met with violence and intimidation when they challenged the status quo. Civil rights organizers worked at various levels to challenge the discriminatory laws and segregationist attitudes prevalent across America for many decades. As these groups like the National Association for the Advancement of Colored People (NAACP) and Student Non-Violent Coordinating Committee (SNCC) and their leaders gained greater visibility, so did their demands for equal rights. As a result, there were increased demand to change discriminatory laws and more structured and visible efforts to register voters.

During the height of the Civil Rights movement the increased brutality inspired greater activism, which in turn led to the passage of the Voting Rights Act of 1965. The landmark legislation sought to combat voting laws that discriminated against voters on the basis of race.

Unfortunately, the wording of the Voting Rights Act did not go far enough to ensure lasting protections of all voters. State politicians again found legal loopholes to exclude marginalized populations from voting, and mechanisms such as gerrymandering became more sophisticated, ensuring politicians' position within a district by "packing" and "cracking" voting groups into voting districts.

Because the act was not an amendment to the Constitution, it has required numerous renewals since its passage. Civil rights advocates have had to fight to retain the protections of this legislation each time the act has expired and as the constitutionality of the law has been repeatedly challenged in the Supreme Court. In a 2013 decision, a crucial section of the VRA was deemed unconstitutional, removing the requirement that states with histories of discriminatory legislation obtain pre-clearance for changes to their voting laws. 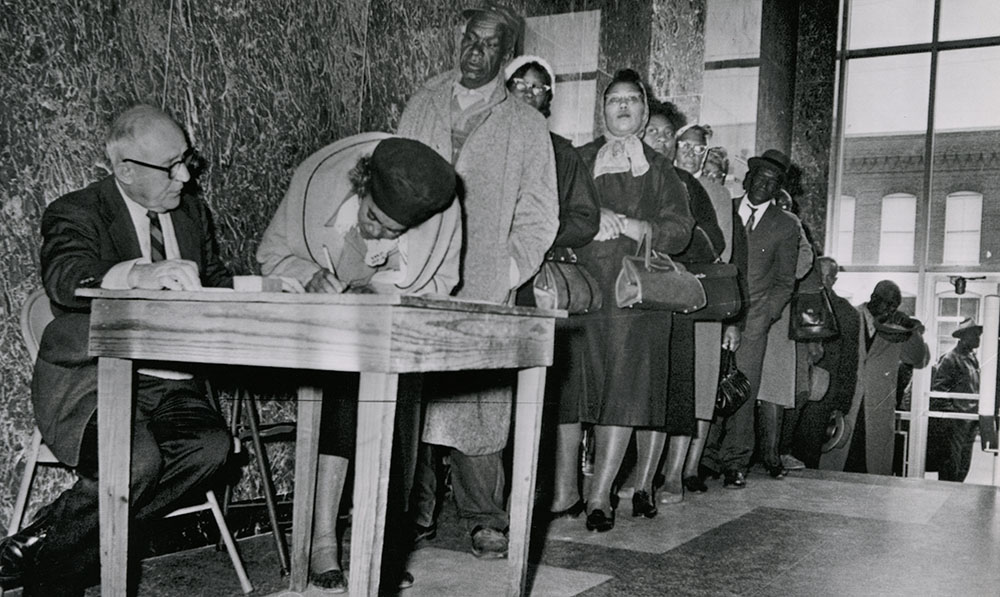 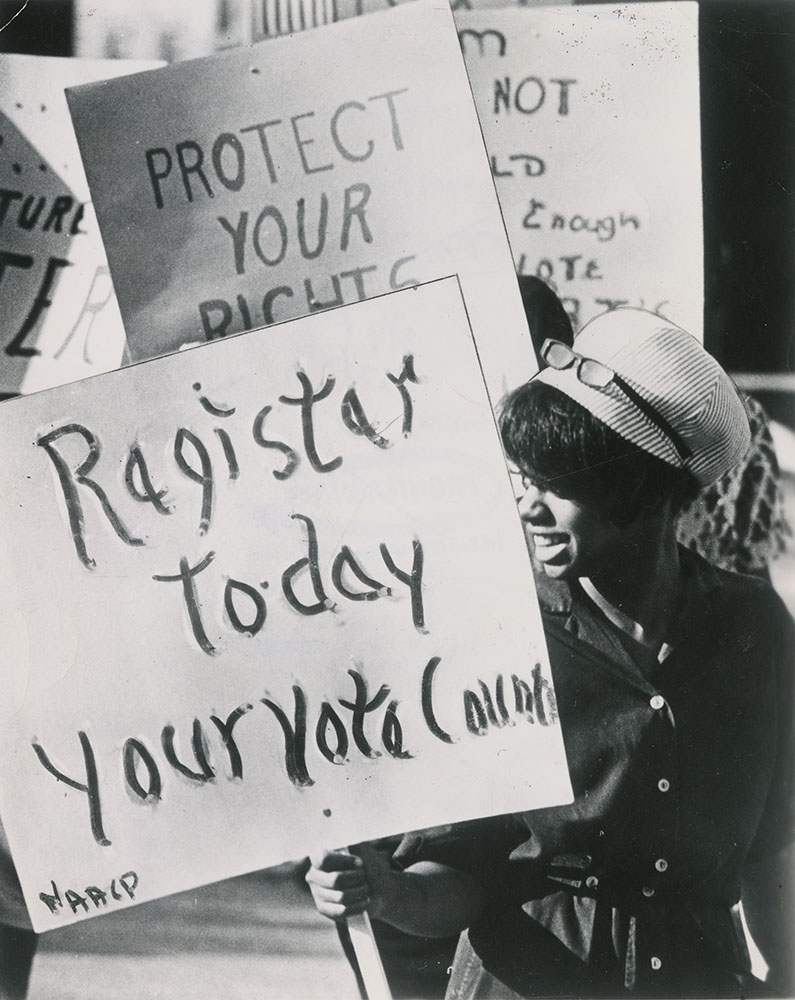 The Civil Rights Act of 1964 was the hallmark of Civil Rights legislation in the U.S. It aimed to prevent discrimination on the basis of race, color, religion, sex or national origin; strengthen the enforcement of voting rights; and end the application of Southern "Jim Crow" laws. Unfortunately, measures regarding the vote were relatively weak and did not ultimately prevent states and election officials from disenfranchising Southern Black voters. Activists continued the fight for the Voting Rights Act of 1965 to better protect the Black vote. 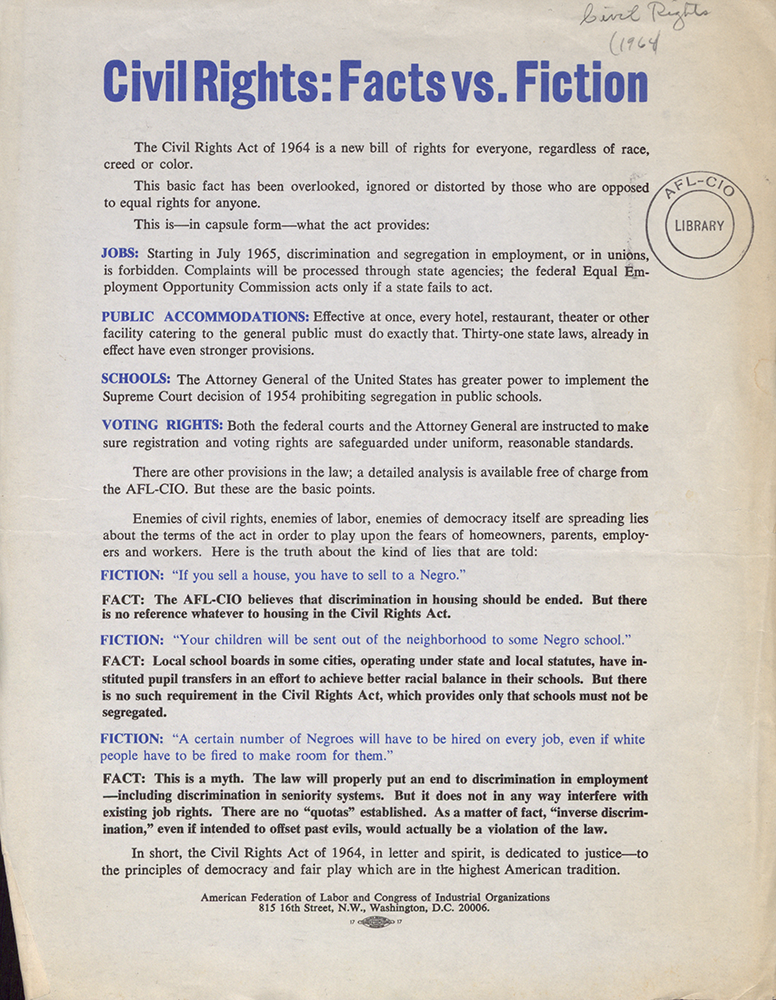 A Commission on Civil Rights Special Publication outlining the 1965 Voting Rights Act, including the full text. The pamphlet was available to all League of Women Voters presidents for distribution. 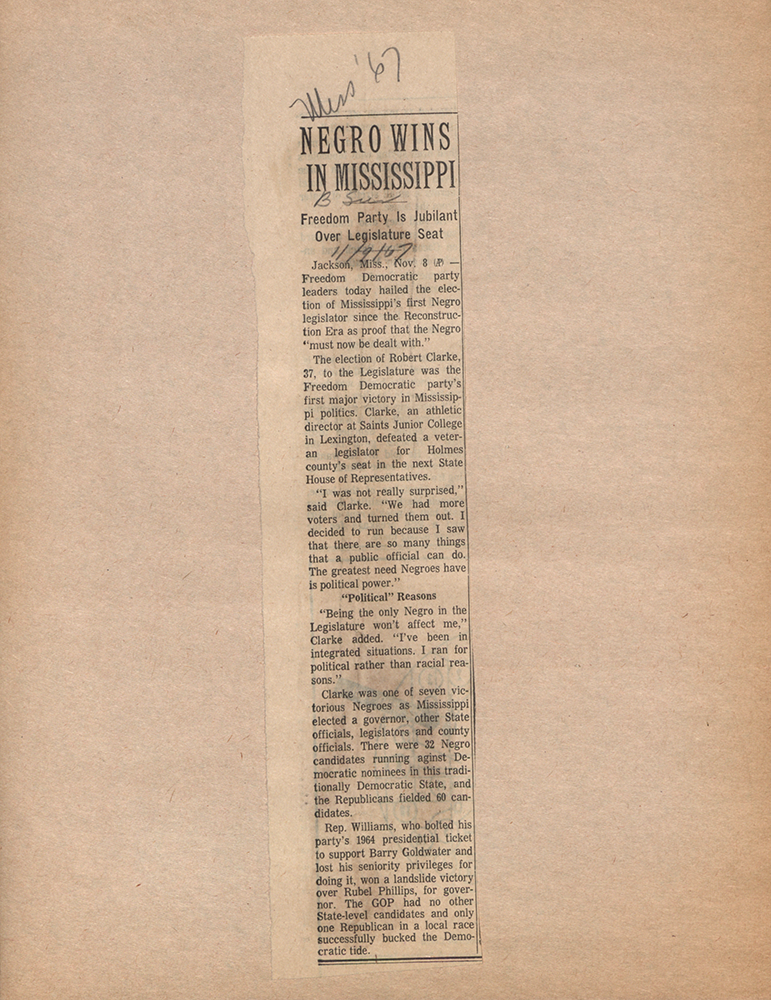 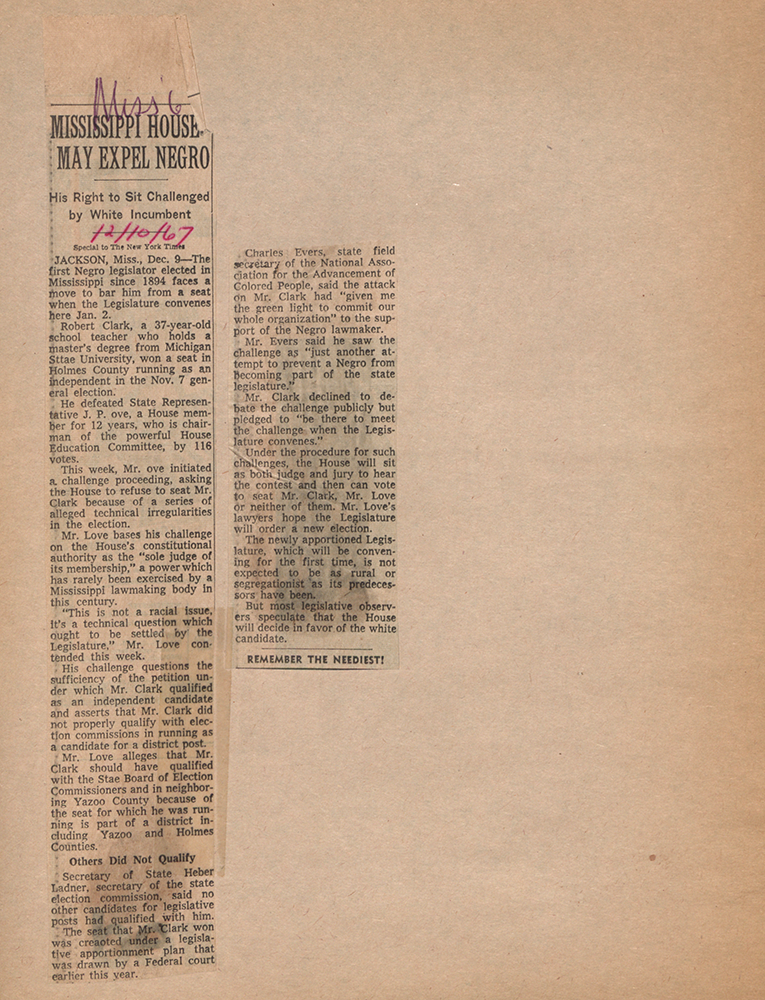 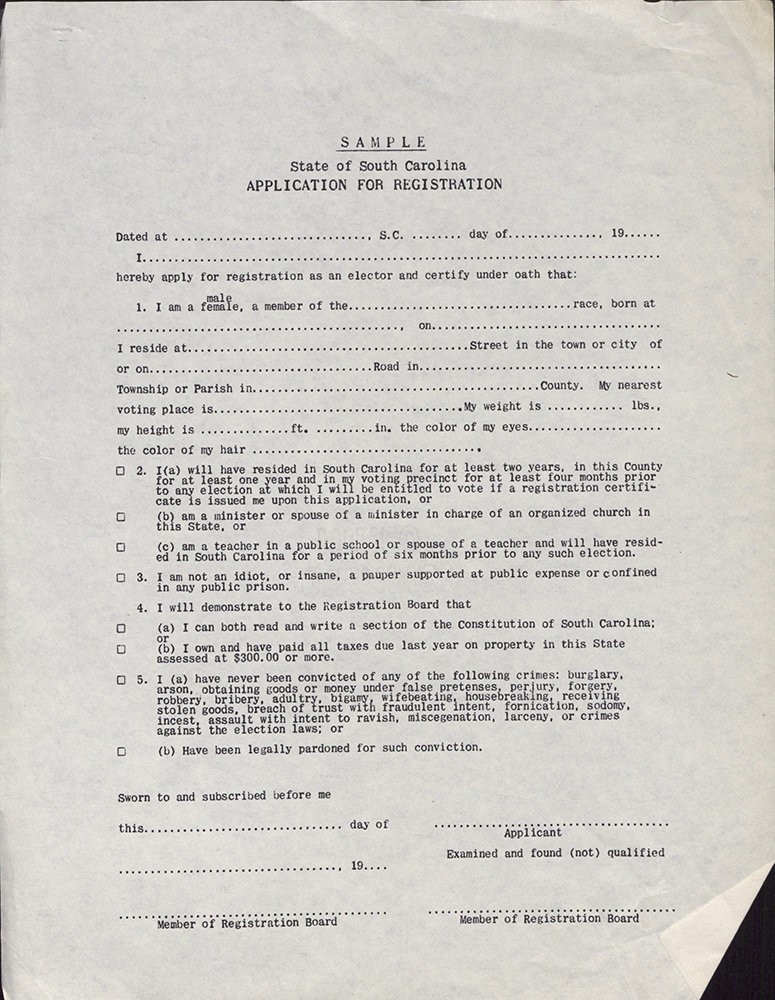 This sample South Carolina application for voter registration demands that voters either complete a literacy test or confirm that they have paid last year’s taxes on property worth at least $300.

Both literacy tests and residency and property restrictions (also known as poll taxes) were commonly employed by Southern state legislatures to disenfranchise Black voters and were specifically designed as a tool of white supremacy.

These deliberately difficult and sometimes confusing tests were utilized to “legally” bar people of color from registering to vote. If a white voter could not complete a literacy test, he was often still allowed to register on the basis of “good moral character” or another trivial qualification.

Senator Joseph Tydings argues for the passage of the Poll Watcher Amendment, which would give the Attorney General the direct ability to assign poll watchers to voting locations in the South that may be violating the Voting Rights Act.

Sample affidavits intended for use by disenfranchised Black voters to challenge race-based denials of voter registration in the South.

This 1958 report on voting restrictions in the South outlines the three main issues Black voters face and offers specific actions in response to each obstacle, including a campaign to increase the registration of Southern Black voters.

This pamphlet details the AFL-CIO’s position on civil rights and outlines the labor movement’s relationship with civil rights issues. One section calls for an end to literacy tests, acknowledging that states might use such tests to disenfranchise Black voters.

“A Resolution” for One Man, One Vote
Maryland.
Jo-Ann Orlinsky papers 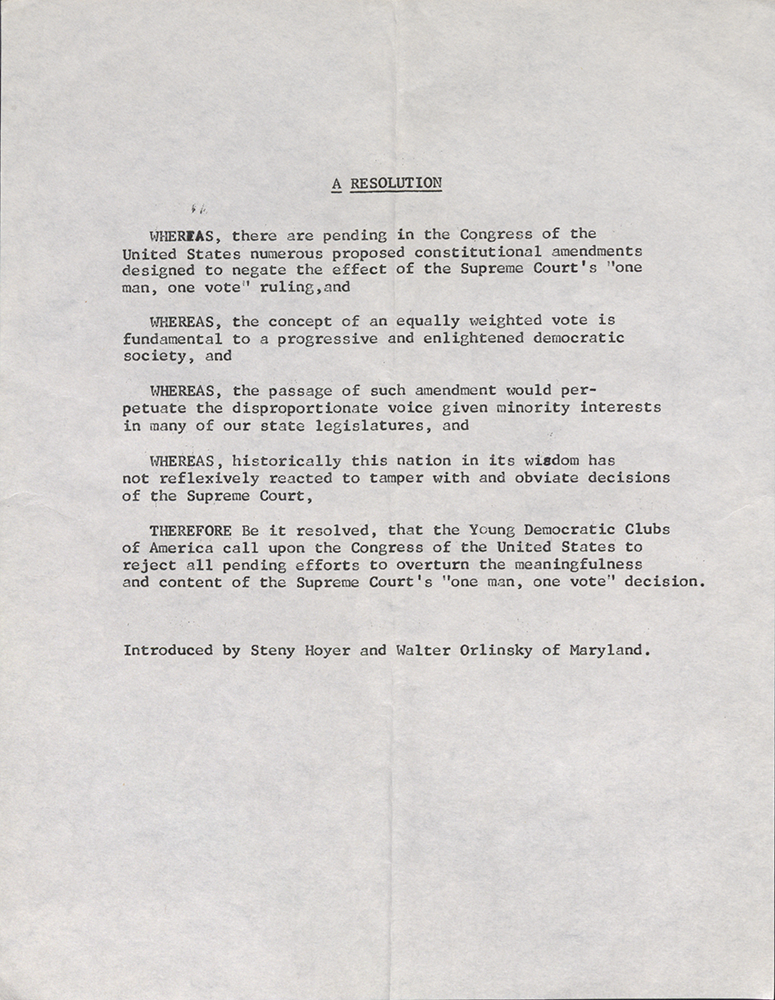 Fighting for the Vote

The Committee on Political Education (COPE) was created in 1955 to encourage workers to participate in political activities. Shortly after the merger of the American Federation of Labor (AFL) and the Congress of Industrialized Organizations (CIO), COPE was created by the AFL's Labor's League for Political Education (LLPE). This new group was tasked with "encouraging workers to register and vote, to exercise their full rights and responsibilities of citizenship."

Pauli Murray, born in Baltimore in 1910, was a co-founder of the National Organization for Women (NOW), as well as a poet, author, lawyer, and civil rights activist. Murray is well known for highlighting the experiences of African-American women in particular. Her work sheds light on "Jane Crow," a term she coined to illustrate that southern Jim Crow laws impacted women, too.

Some Jim Crow laws made voter registration and electoral processes more restrictive, so political participation among many southern black voters was suppressed. Such laws included poll taxes, literacy tests, and residency requirements. Voter turnout dropped drastically in the South as a result.

Murray's book States' Law on Race and Color examined and critiqued Jim Crow and similar laws throughout the U.S. It drew on social and psychological theory as well as legal theory, which drew some criticism within the legal profession.  However, States' Laws on Race and Color was hugely influential to the Civil Rights movement. Thurgood Marshall, who was then the NAACP chief counsel and would eventually become a Supreme Court justice, called it the "bible" of the civil rights movement, and the NAACP mirrored Murray's social-scientific approach in their arguments in Brown v. Board of Education.

This short comic published by the NAACP addresses race relations in the South and stresses the importance of voting to Black communities. 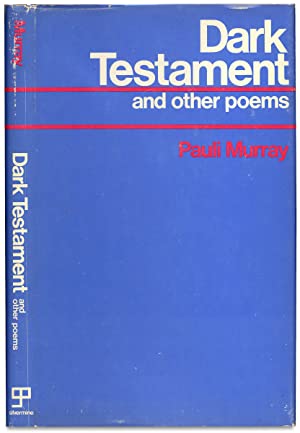 The Student Nonviolent Coordinating Committee, better-known as SNCC, was a student-led civil rights group active during the 1960s. They are best known for organizing sit-ins at segregated lunch counters across the South. SNCC focused mainly on direct action, and with help from early mentor Ella Baker, their activist vision prioritized grassroots organizing and equal participation for women.

Registration and mobilization of black voters in the South were two of their biggest projects. In early 1962, the Kennedy Administration created the Voter Education Project (VEP) to fund voter drives in the South. Many members of SNCC believed that obtaining the right to vote was an important step toward political power for black Americans, and were excited by the new opportunities to register voters. Other members saw the VEP as the government's attempt to co-opt the movement. Nevertheless, SNCC helped register many southern voters, despite facing extreme violence and opposition in doing so. 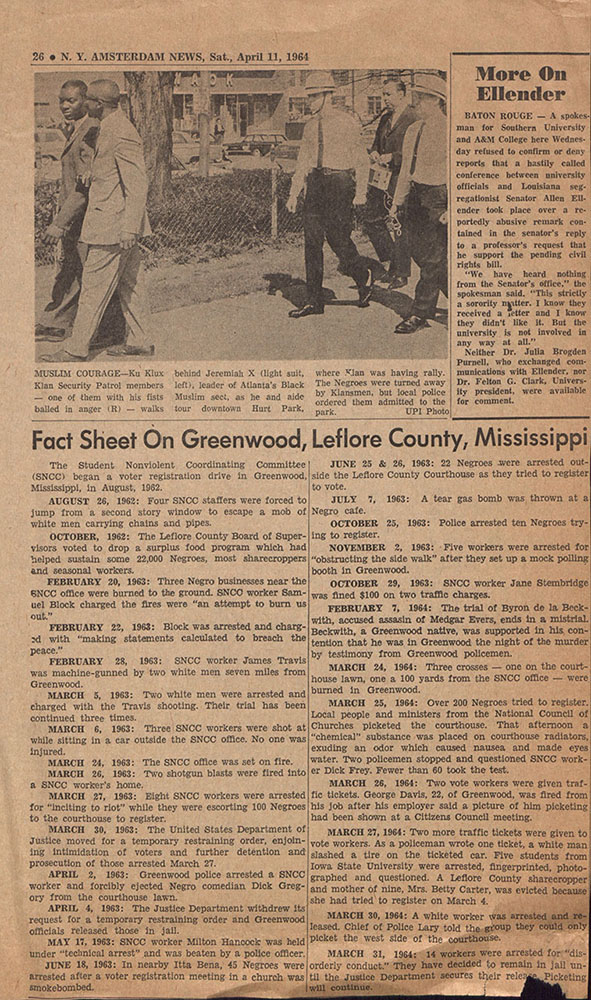 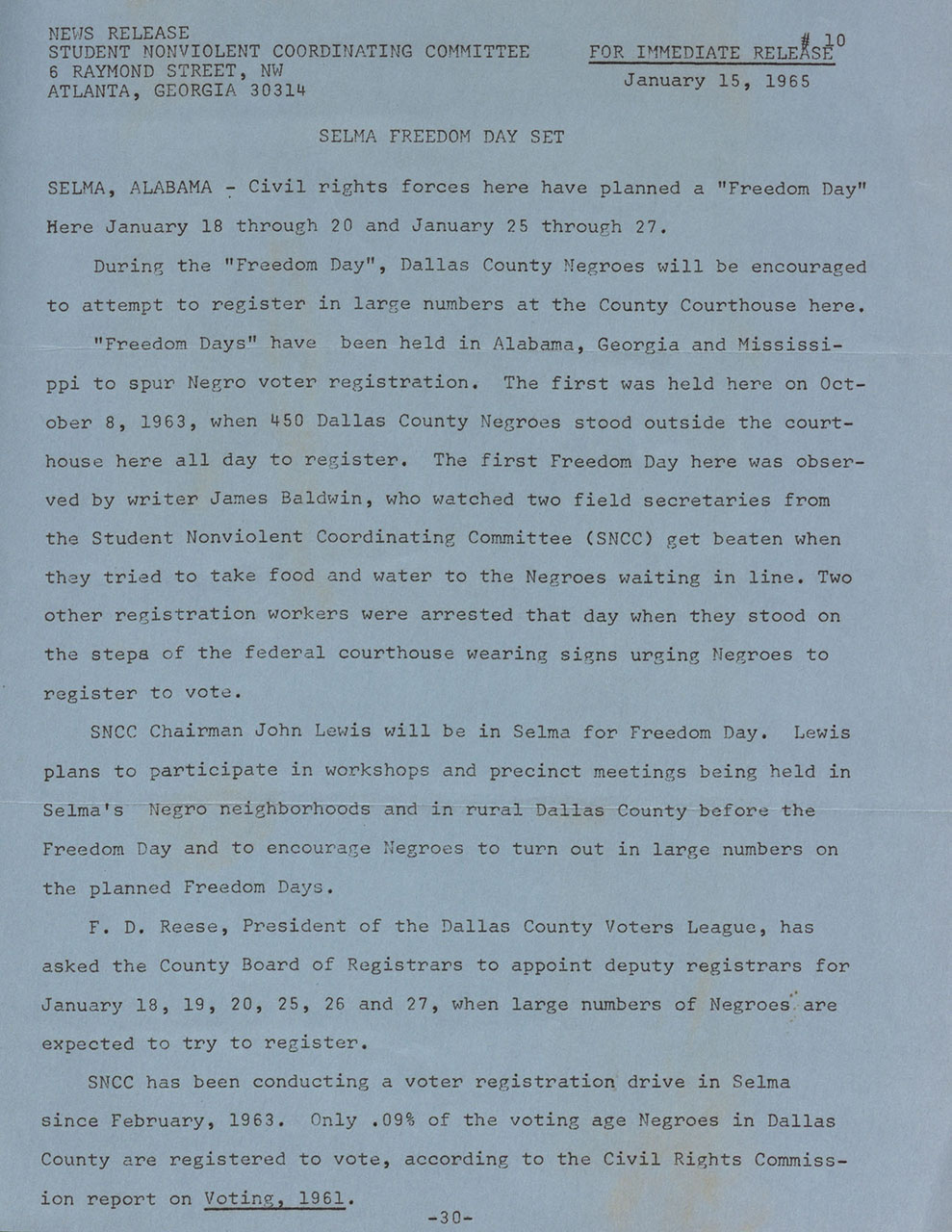 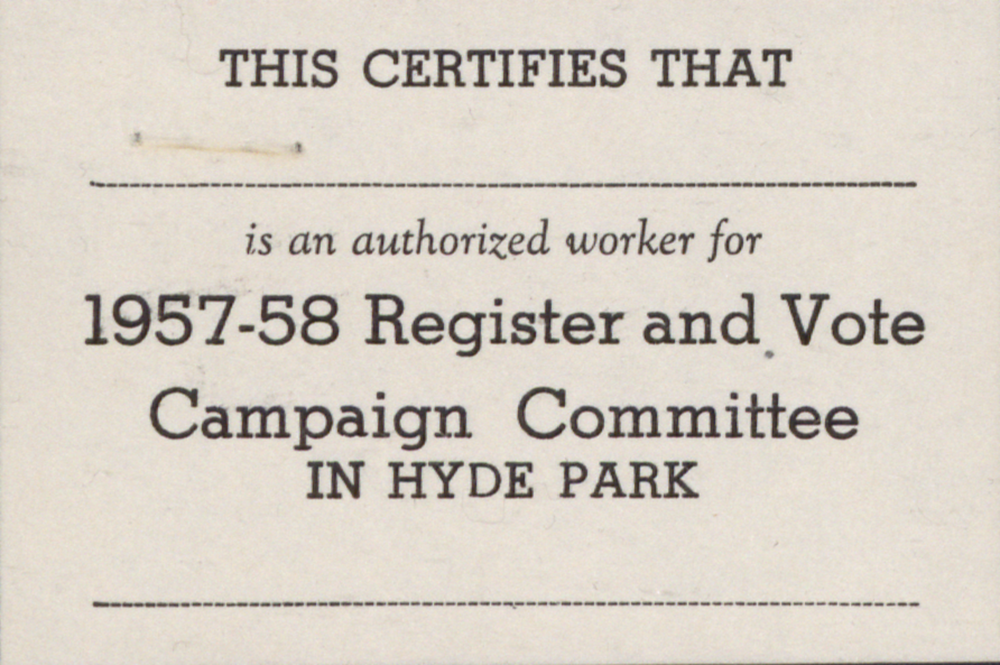 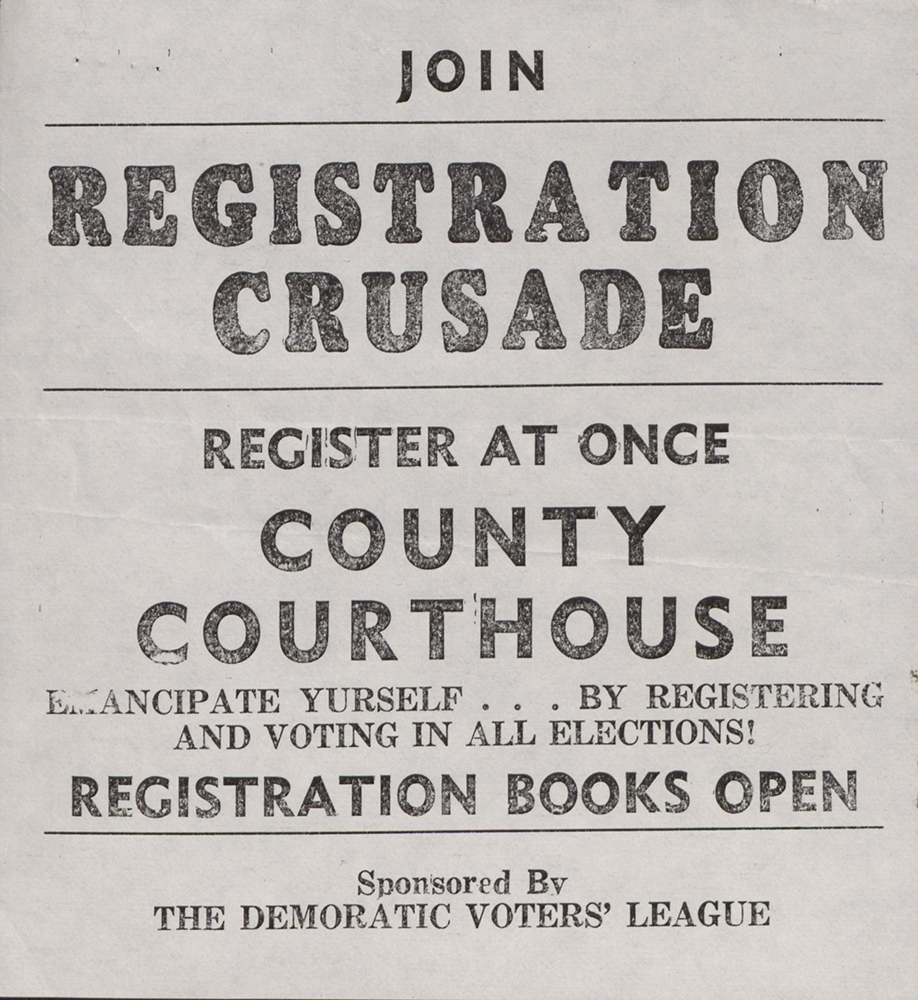 Laundry workers cast their votes at the Harlem Labor Center. 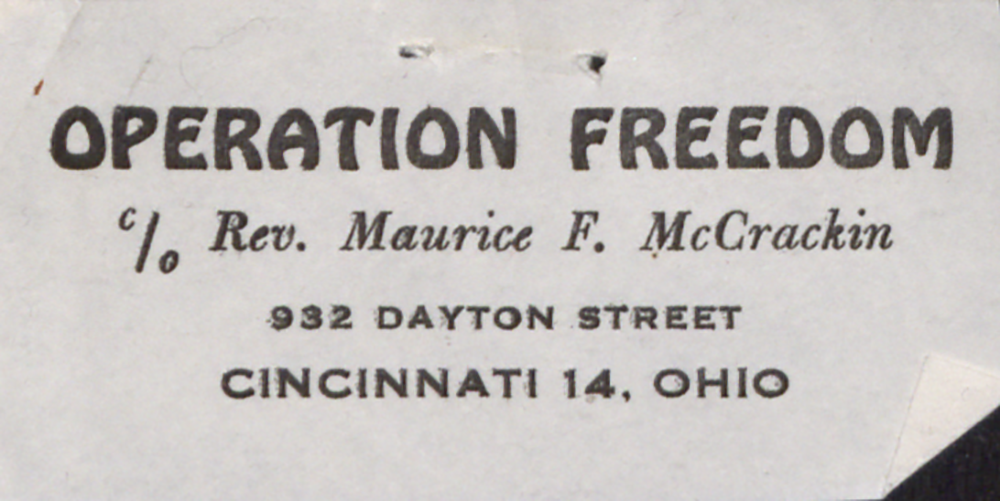 National Organization for Women (NOW) was formed in 1966 as an organization focused directly on advancing women's rights.  It was and remains the most visible second-wave feminist organization, and it represents the first independent American women's movement since the women's suffrage movement at the beginning of the 20th century.

Twenty-eight women co-founded NOW, including well-known feminists like Shirley Chisholm, Betty Friedan, and Pauli Murray.  Their original statement of purpose, written by Friedan and Murray, declared that "the time has come to confront, with concrete action, the conditions that now prevent women from enjoying the equality of opportunity and freedom of choice which is their right, as individual Americans, and as human beings."  Today, their platform also addresses voting rights.  They argue that women are disproportionately affected by voter suppression and work to get feminist candidates elected to office. 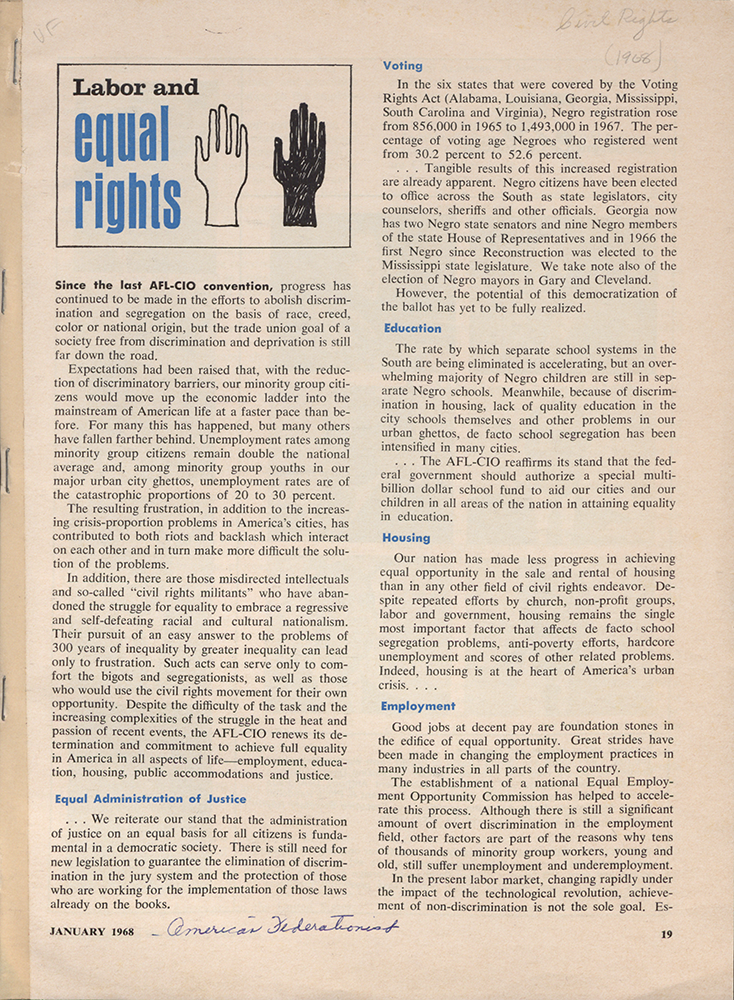 “Bullets do not discriminate, Landlords do!” by Lyndon B. Johnson
1967.
AFL-CIO Civil Rights Department records

NEXT SECTION: Committee on Political Education