The stars were in alignment at Nancy Drew’s creation in 1930 since several factors combined to produce a bestseller. First there was the storytelling genius of Edward Stratemeyer, his timely adaptation of the mystery genre for juveniles, and the marketing power of his syndicate. There also existed a market in the early 20th century for a girls’ series with a strong heroine with style, courage, and independence since most books for girls at that point featured dependent and obedient heroines.

Another crucial element for Nancy Drew’s success was the selection of Mildred Wirt Benson as the ghostwriter for the series. A final winning touch was Stratemeyer’s choice of Russell Tandy to illustrate the dust jackets and internal illustrations for the series. The classic fashionable Nancy he created did much to add to the appeal of these books. That Harriet Stratemeyer Adams and Edna Stratemeyer Squier were willing to take over the running of the Stratemeyer Syndicate after Edward Stratemeyer’s death so soon after the first Nancy Drews were published also was important in the continued success of the Nancy Drew Mystery Stories.

Contributing to the appeal of the Nancy Drew series is the predictability of always finding certain elements present in the stories. Although she encounters danger in every book, we know Nancy will always solve the mystery and restore order. We know Nancy will use her wits to discover and interpret clues to solve the mystery. We know she will fearlessly do whatever is necessary to catch the villain without thought of her own safety, whether it involves climbing up the side of a house on a ladder in the middle of the night, driving in a storm on a winding road, or secretly spying on suspicious behavior. Illustrations from the Nancy Drew books reinforce some of these common occurrences. 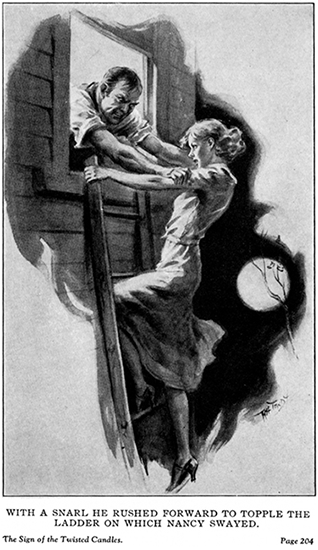 Nancy’s car figures prominently in her adventures, and her excellent driving skills are stressed in many of the mysteries. In The Bungalow Mystery, Nancy’s car is practically a co-heroine. Her expertise in driving is repeated numerous times, and her roadster seems to have a personality of its own.

“The rough forest road held Nancy to a slow pace, but when she reached the lake thoroughfare she stepped on the accelerator, and the little car began to purr like a contented cat.”

“The little blue car fairly roared down the road as though it, too, were eager to overtake Stumpy Dowd.”