"Nothing the ABA does is more important than stimulating talented composers to write for band."

Since it was first given in 1956, the Sousa/ABA/Ostwald Contest has modified its rules several times to encourage quality submissions and fair competition. However, the award has remained consistently true to its original mission: to stimulate the composition of original works for concert band. In addition to the more than 50 winning compositions the contest has directly supported, it has indirectly led to wider interest in composing new works for concert band. The contest has received thousands of submissions over the years, many of which may not have been written for band without the challenge of this prestigious competition.

Today, as in the early days of the contest, ABA appoints a committee to administer and adjudicate the submissions. The winning composition is performed at the following year’s ABA Annual Convention, and the composer receives a cash prize. Several young composers who won the award have gone on to have distinguished musical careers. 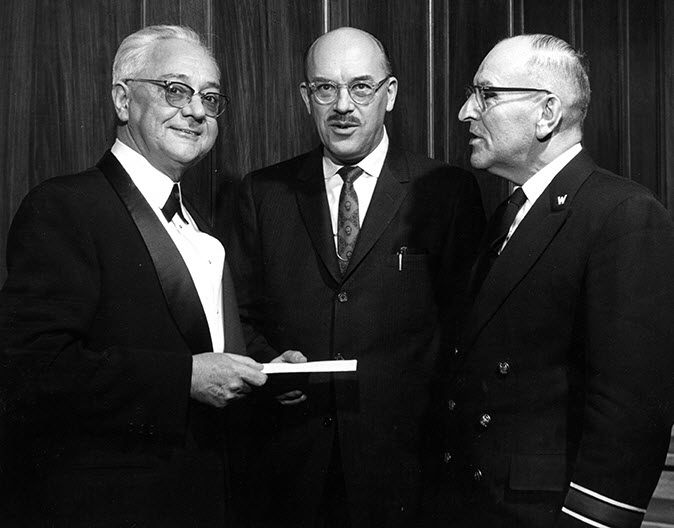 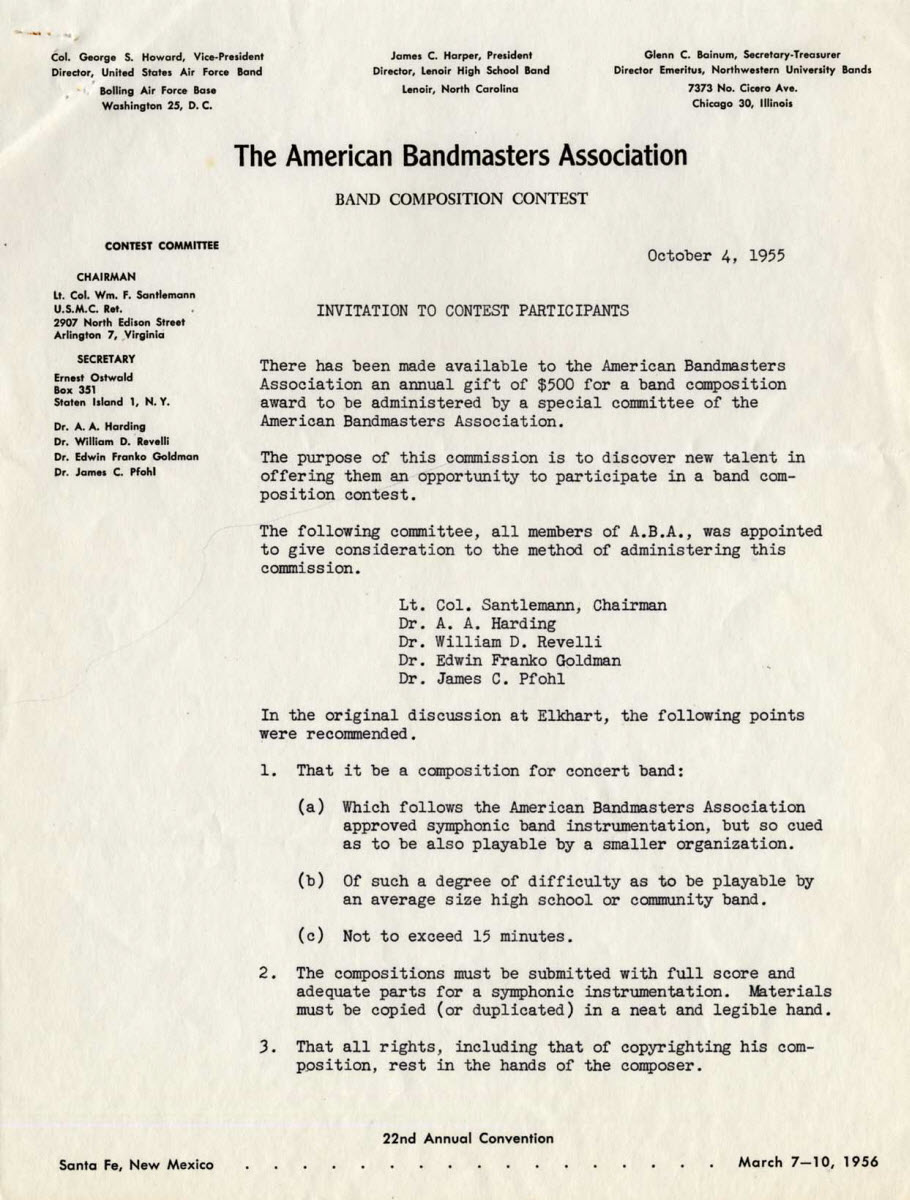 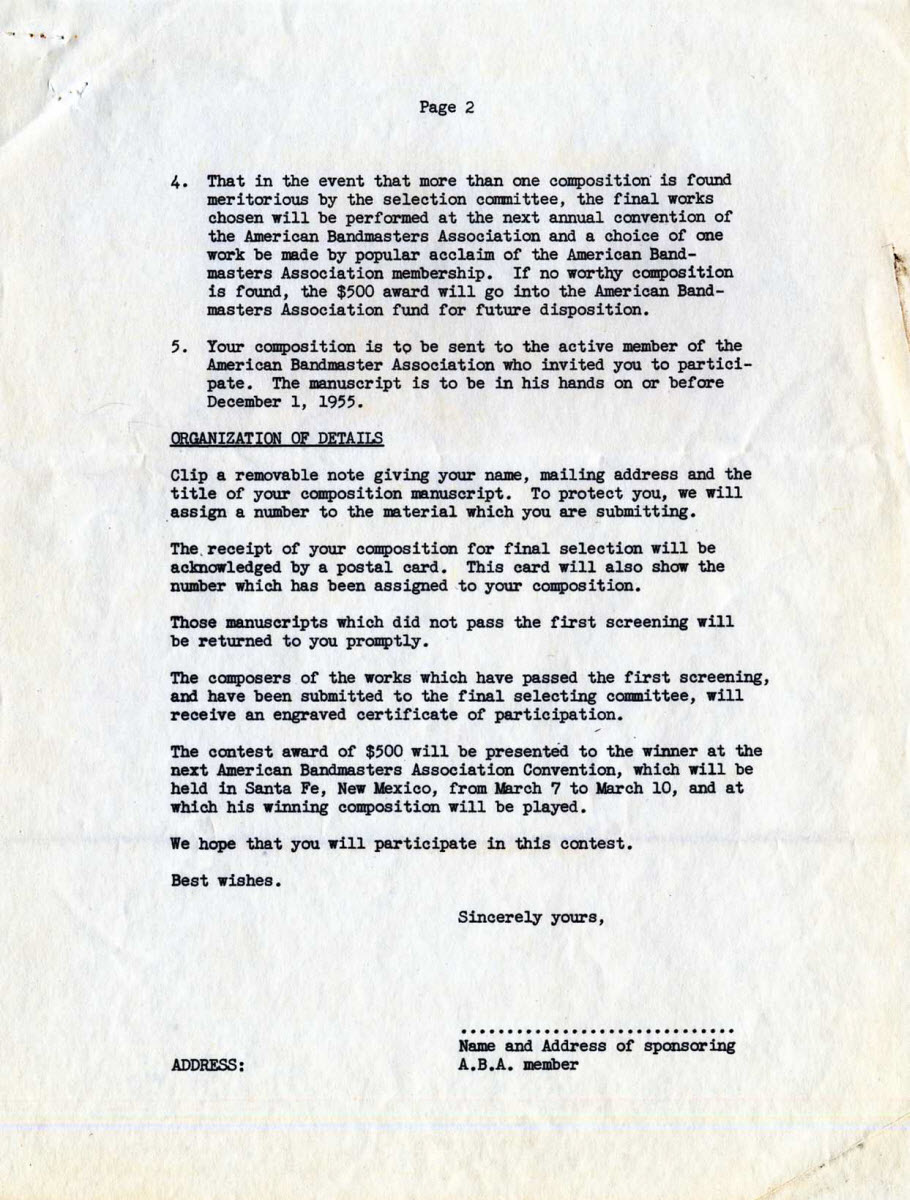 This document announces the first ABA Ostwald Award and describes the rules for participating composers.

"The purpose of this commission is to discover new talent in offering them an opportunity to participate in a band composition contest."

Report of the Ostwald Award Committee, 1964

This report looks back on nearly 10 years of the award’s history and notes two significant changes to contest rules: 1) "the compositions no longer need be sponsored by an ABA member," and 2) "the length of the composition is no longer limited."

The report also lists the 25 semi-finalists for the 1964 award, including not only the eventual winner, Overture for Band by Frederick Beyer, but also Elegy for a Young American by Ronald Lo Presti, now a standard of the concert band repertoire. 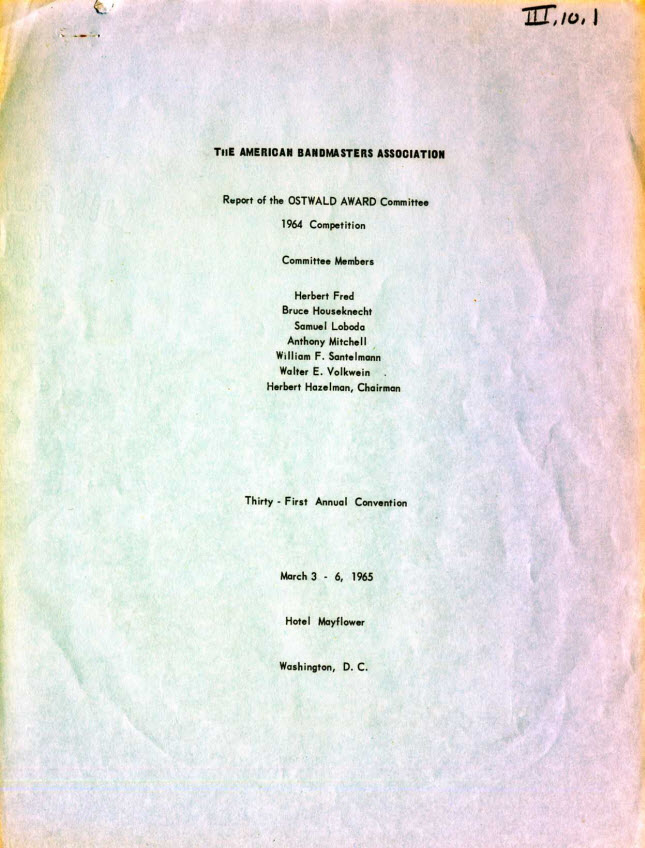 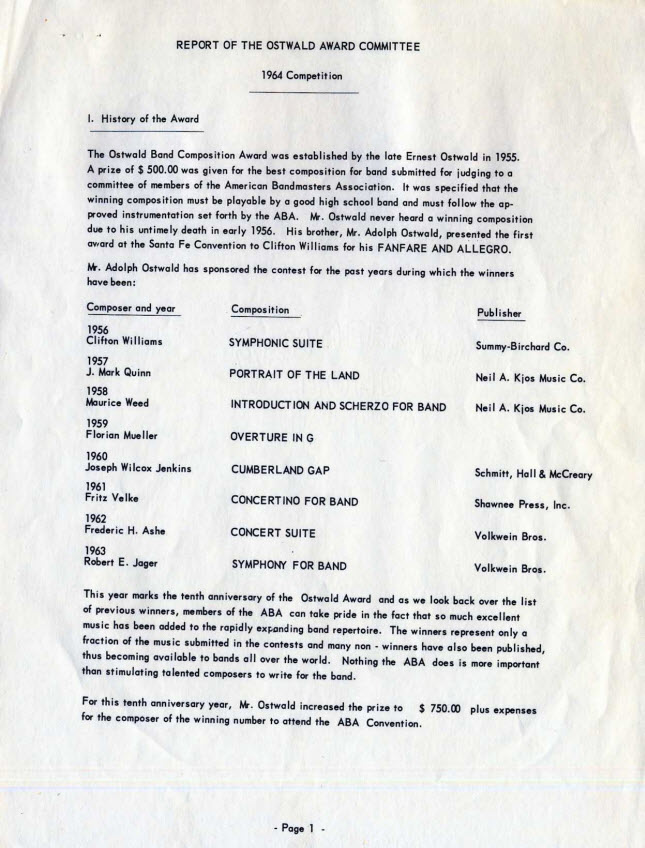 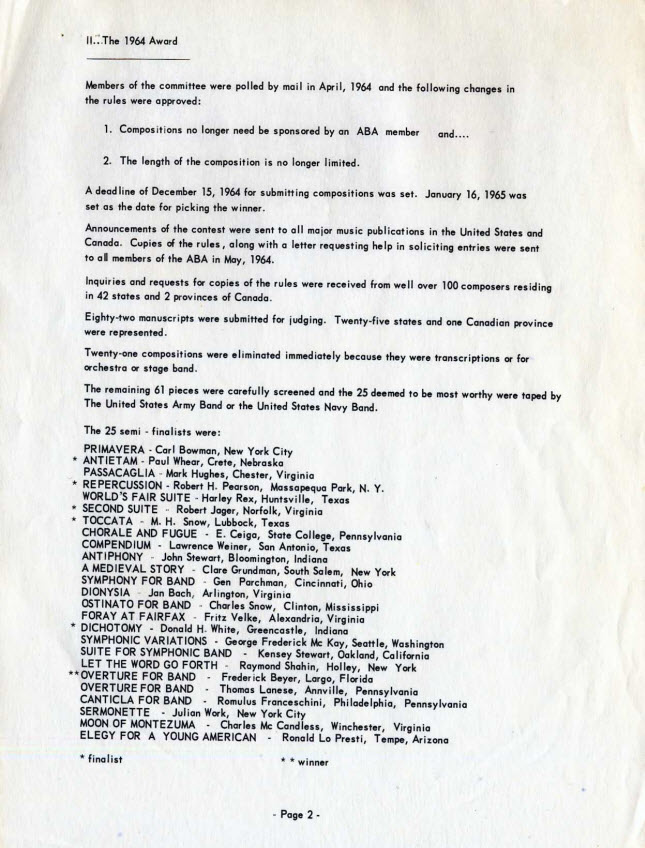 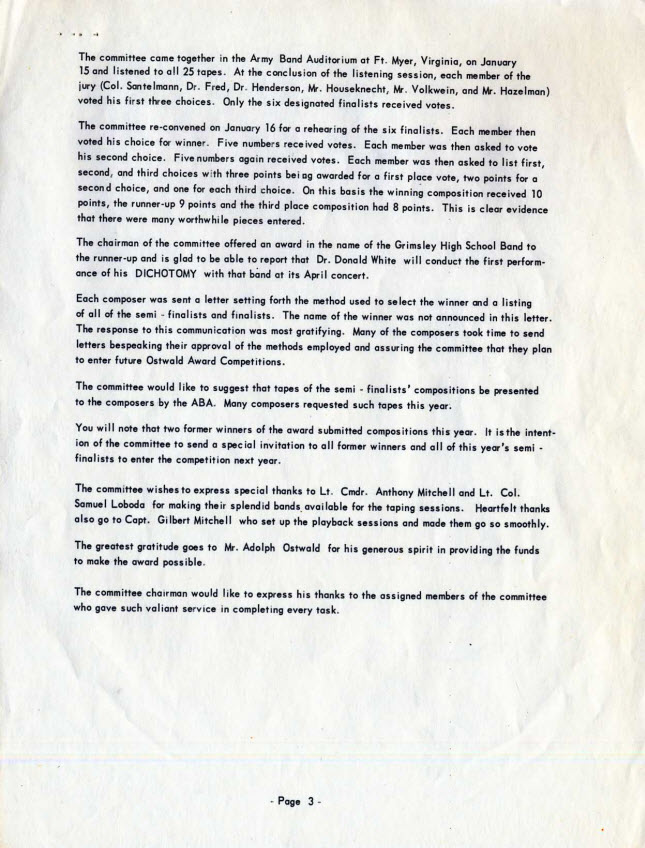 Advertisement for the ABA/Ostwald Award, 1976

In the late 1970s, the ABA Ostwald Contest invited only unpublished and non-commissioned compositions. Contest rules at the time stated that "The composition should be so conceived and constructed as to be effectively performed by professional, university and high school bands, thereby encouraging the widest possible exposure of significant new band music to performers and listeners alike."

For several years, the contest also included a special award of $500 for best composition submitted by a college-level undergraduate student. 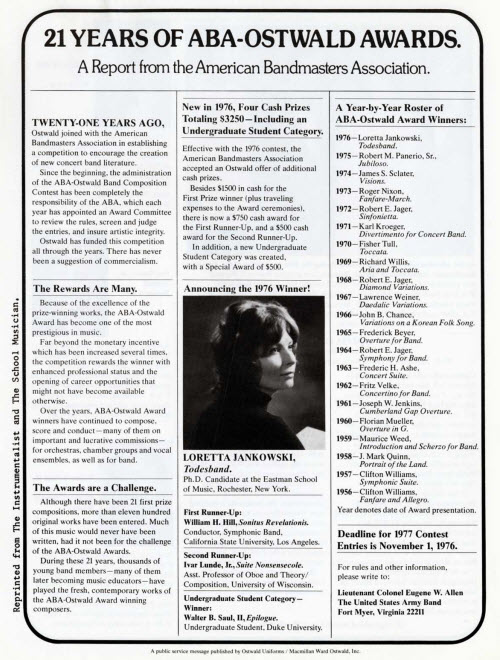 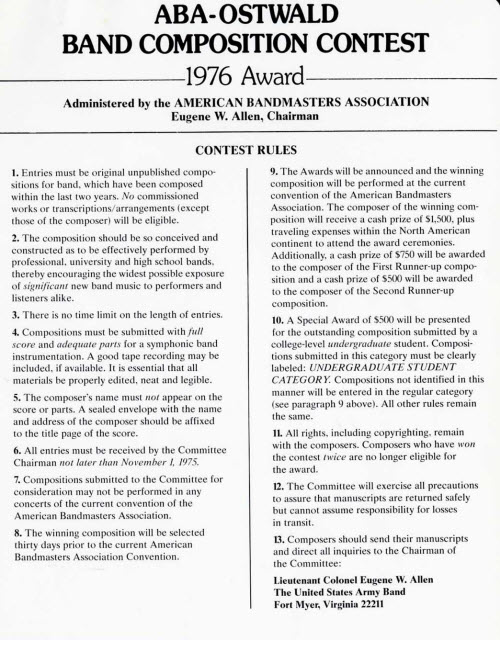 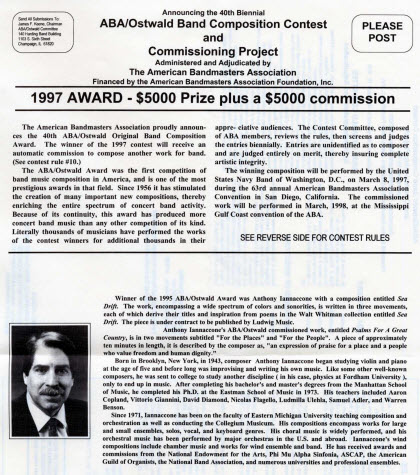 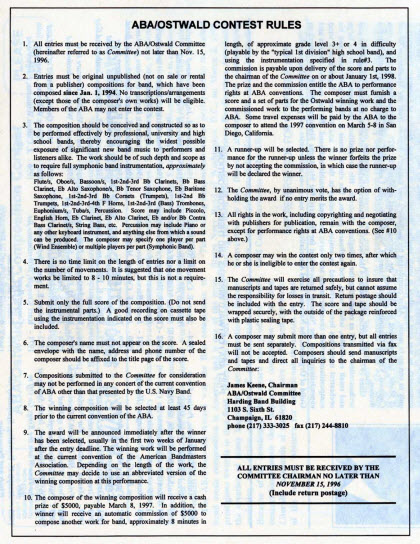 Announcement of the 1997 ABA/Ostwald Award

During the 1990s, the contest was awarded biannually and the winning composer received a commission to produce a new work for the following year's ABA Annual Convention. The contest rules displayed here specify the full symphonic band instrumentation to be used and indicate that the commissioned piece should be "of approximate grade level 3+ or 4 in difficulty (playable by the 'typical 1st division' high school band)."