"Two conceptual frameworks, Laban theory and the anatomical base of muscle function in PT enabled me to take a new look at the simple basic exercises established in either area, asking, raising the question: what is fundamental in basic actions?"
(Irmgard Bartenieff, Duke lecture notes))

From Bartenieff we have the principles of movement, Laban's common factors, on which to base our study of human motion. For Bartenieff, the totality of human movement analysis expanded on Laban’s theories to include four elements: Body, Effort, Shape, and Space (BESS). Bartenieff based her work on what she perceived as universal truths as far as the body and its connection to the world: to self, to space, to other bodies. Sequencing and initiation, breath support, spatial intent, rotation, attitude and effort (dynamics), and themes of expression-function, inner-outer, stability-mobility, exertion-recuperation support the Fundamentals. In addition to those principles Bartenieff developed exercises for body awareness, changes in level, and means of locomotion. These exercises are based on those common factors and principles, and can be accomplished – in some form – by almost everyone. The principles rely on basic, fundamental, themes and patterns of movement and are discernible by others (and the self). Laban and Bartenieff, then, created a system within which we can recognize these themes and patterns as representative of inherent mind/body connections.

"Bartenieff Fundamentals℠ is a construct that focuses on movement integration and harmony." When moving, our coordination is affected by body connections, center of weight and the relationship to initiation and follow through of a given action. Bartenieff Fundamentals℠ was developed by Irmgard Bartenieff in applying Rudolf Laban’s movement theories to the physical/kinesiological functioning of the human body. In developing the principles of Fundamentals, Bartenieff was concerned with support of the body to facilitate functional, expressive and efficient movement experiences."

Irmgard kept multiple drafts of papers in loose-leaf and notebooks. Below are a few drafts of a Teaching Manual for Fundamentals, and the big question for her: What is Fundamental?

Click on an image to see a larger, more readable, version.

The Body and the Basic 6

The Body is incorporated in the Laban/Bartenieff Movement System through the concepts of Bartenieff Fundamentals and Bartenieff’s Basic 6 exercises, developed through her work in physical therapy. According to Bartenieff: 'The six are considered basic because they are applicable to all activity in that they are concerned with the internal support of the body as it develops into uprightness.' And further: 'Bartenieff Fundamentals emphasize the internal connections that are key to dynamic rather than static movement.' And, she quotes Laban, 'The skeleton virtually outlines in both its utilitarian and expressive movements the edges and inclinations of an invisible space crystal.'

Irmgard's many notebooks offer a glimpse into the evolution of her thinking about the primary exercises that eventually became the Basic 6. These pages from one notebook show a progression from kneeling to sitting, body half, and sagittal pelvic shift, and also provide thoughts on the 'spaces' of the spine ('raumlagen'). 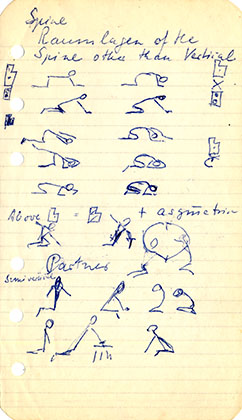 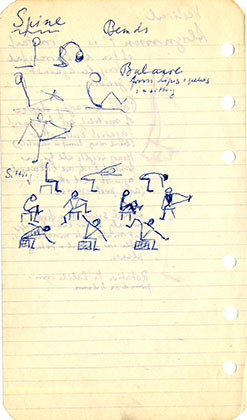 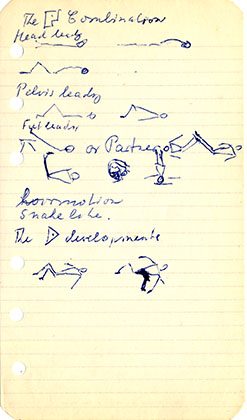 Irmgard firmly believed in Laban's theories of Space -- Choreutics -- but she expanded on those theories to incorporate ideas put forward by Warren Lamb and Judith Kestenberg regarding shape and folded them into her ideas about what is fundamental in movement. At one point she began developing a series of teaching tapes based on her Fundamentals and Laban's theories, a portion of one titled 'Choreutics' can be heard here and within which you can see how she views the relationship of Space, Effort, Body, and Shape.

Listen to Irmgard speaking about Space

While she's speaking, you can read a draft copy of the tape transcript. 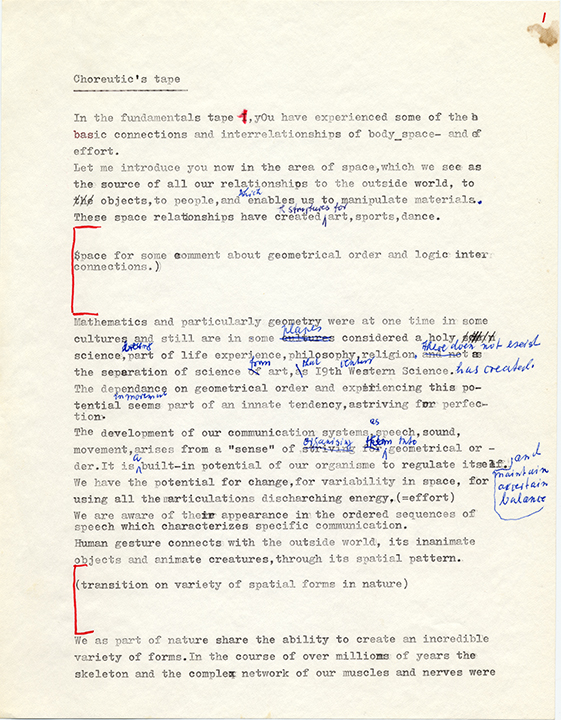 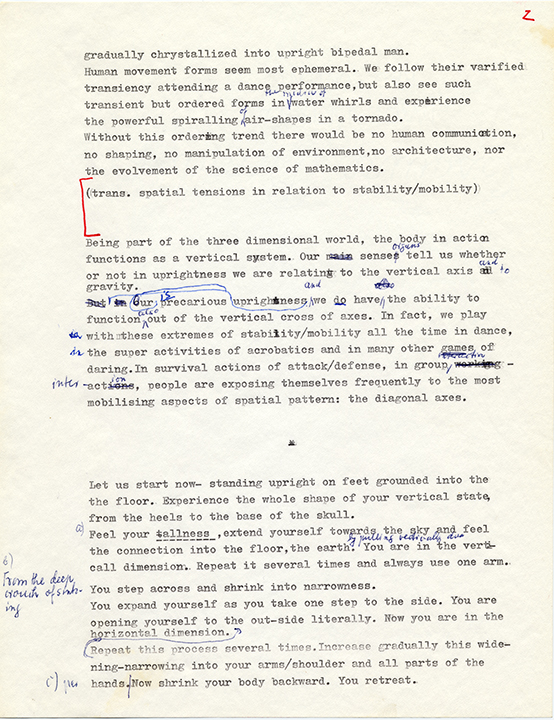 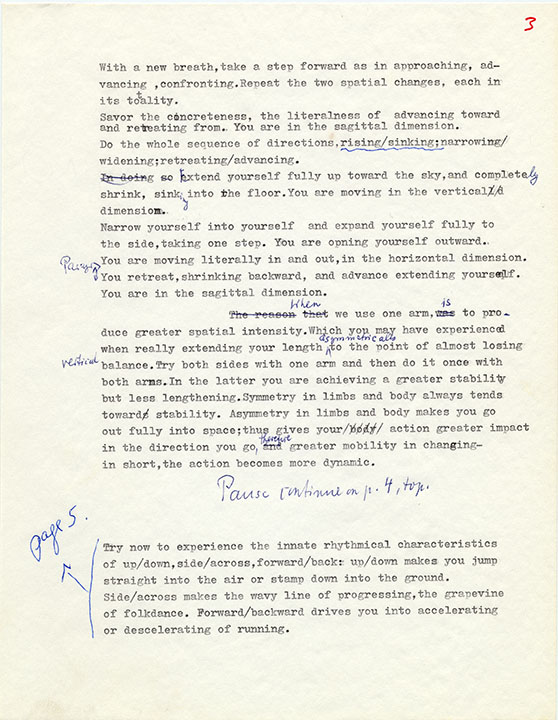 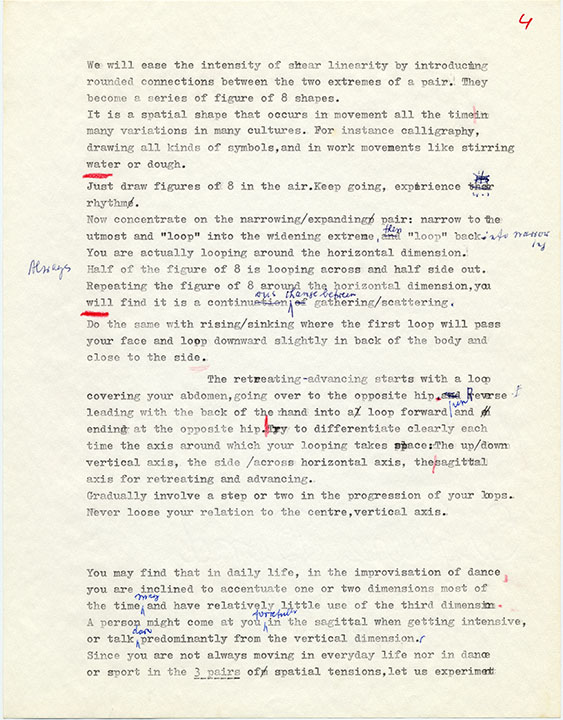 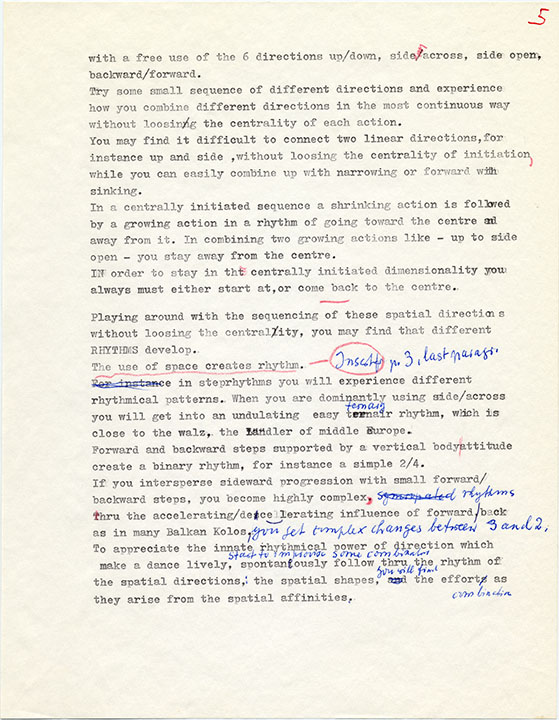 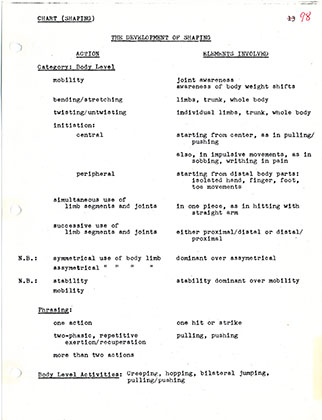 For Irmgard, Shape is the interrelationship of the Body, Effort, and Space used to shape our internal and external environments, and it is sthe final S in BESS. Shape begins when we develop as babies, Shrinking and Growing as we explore both our bodies and space. The study of Shape, as a component of Bartenieff's extension of Laban's, Lamb's, and Kestenberg's theories, contains several aspects: Still Forms (pins, walls, balls, screws, pyramids); Shape Qualities (rising/sinking, spreading/enclosing, advancing/retreating) which affine with Efforts and Octagonal Space; and Modes of Shape Change (Shape Flow [self-to-self], Directional Shaping [self to other through arc and spoke-like movement], and Shaping/Carving [fully 3-dimensional movement with the environment]). To demonstrate these concepts Irmgard used photographs of ordinary people found in newspapers and magazines. Below are three of those images from the collection of her papers.