"The very feeling for and insight into the language of movement take Laban beyond aesthetics...into the many 'dances' of life itself" (Irmgard Bartenieff)

Rudolf Laban (1879-1958) was a visionary, humanist, teacher and theoretician, whose revolutionary ideas bridged the gap between the performing arts and science. He matured in an era in which ideologies of Idealism, Volksgeist, Kanstpolitik, and Wagner’s Gesamptkunstwerke held sway. Concepts about movement within these ideologies included: Movement is expressive, allows for self-evaluation, and derives from an inner physical core (it also could establish national pride). Laban would add that movement is transformative, organic, and 3-dimensional, and that movement patterns are discernible, either functional or expressive and all movements of the body (parts or whole) are composed of a few common factors. In the 1920s Laban began developing a means of notating dance, using ballet as a basis for what he called 'Dance Writing' (Schrifttanz), but also began formulating his theories about spatial composition.

In the 1940s Laban expanded and formalized his belief that there is an inner impulse that supports movement and a visible representation of that impulse through man’s organization of Space and the qualities of the movement, what his collaborators called Effort.

The concept of Space includes several aspects, many of which can be experienced within the Icosahedron (a polyhedron with 20 faces, 12 vertices, and 30 edges), the Cube, and the Octagon. It all begins with the three-dimensional body and its kinesphere, which is the ‘farthest reaches of length, width, and depth in the upright position’, and through which ‘a sense of the three-dimensional space around [the body] is created’. (Bartenieff and Lewis, 1980). With his theories of Space fairly solidified, Laban developed a means of notating it, and in 1926 he published a text about the body and Space:Choregraphie.

These images are from a notebook during Irmgard's study with Laban in 1927-28, the same time she was choreographing and notating her dances (see Dance Reconstructions).She labeled the notebook 'Raumlehre' (Space Teaching) and the symbols and notes indicate that she was taking notes per instruction in Laban's theories as respresented in Choregraphie. 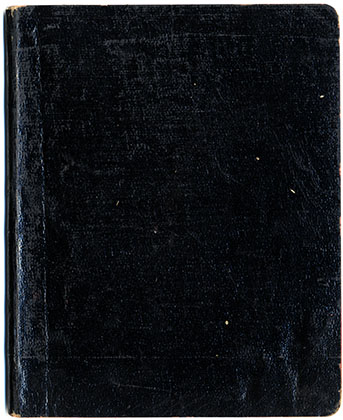 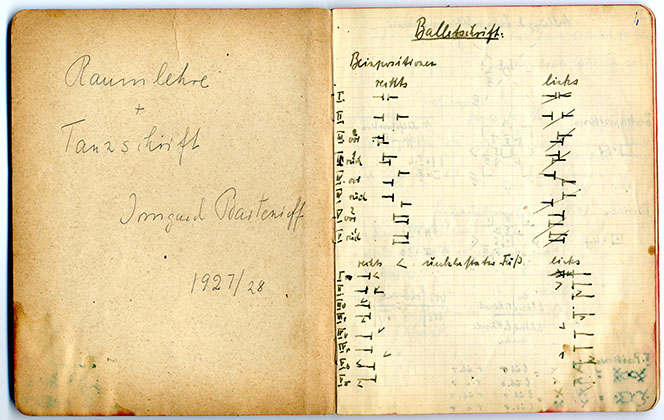 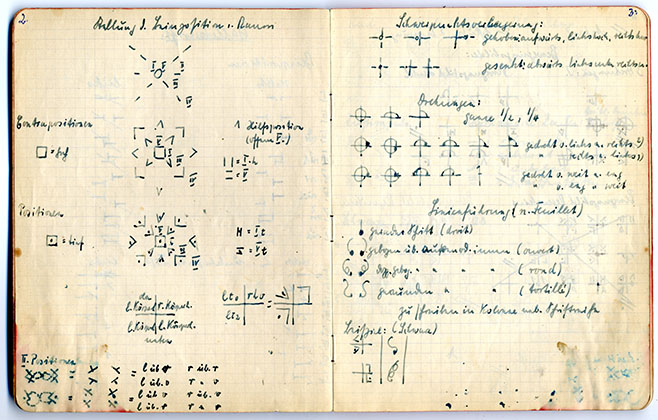 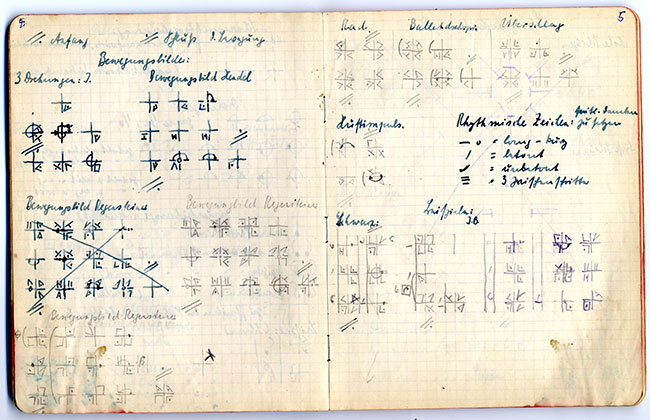 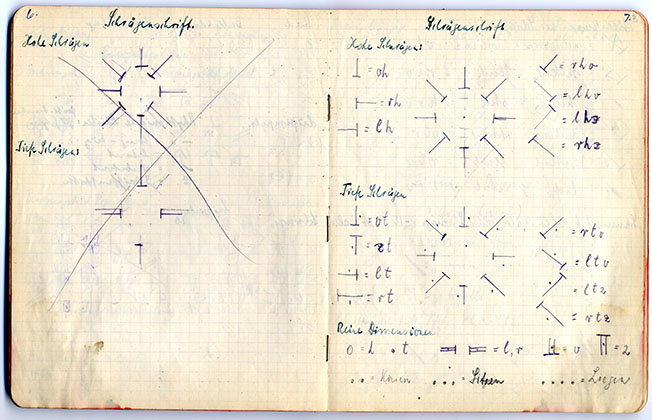 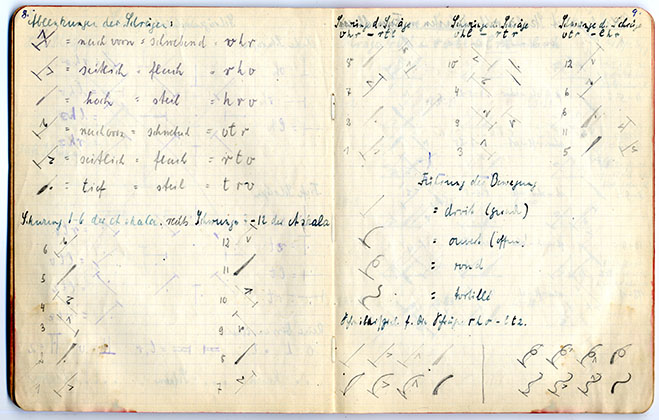 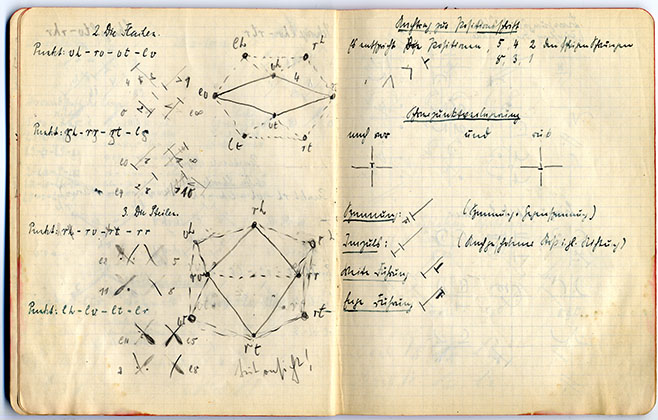 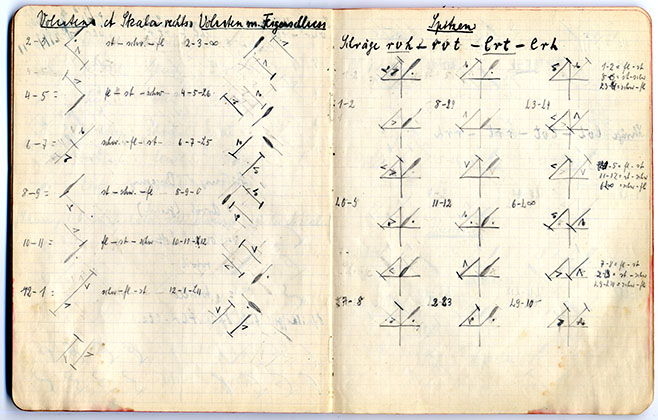 Laban's theories about the quality of movement, Effort, became more firmly established in the 1940s. After Laban's death in 1958, Lisa Ullmann published several of his texts posthumously, with her translations and annotations, one of which was Choreutics, focused on the theme of Mobility/Stability and Space and it's relationship to Effort (the Dynamosphere) was published in 1966.

Effort, as Laban theorized, encompasses movement qualities, inner attitudes, represented by four elements, each with two opposite extremes on a continuum: Time (Quick/Sustained), Weight (Strong/Light), Space Effort (Direct/Indirect), and Flow (Bound/Free). An Effort graph is a visual representation of the Effort elements, and is used with other symbols  by movement analysts to record movement quality in what is known as Motif writing. On the graph the indulging factors (Light, Indirect, Sustained, and Free) are seen above the diagonal line while the Condensing (Strong, Direct, Quick, and Bound) are below it.

Evidence of Laban's belief that psychology played a role in movement studies can be found in this Effort chart scribed by William M. Carpenter for Laban. Carpenter, a Jungian analyst, collaborated with Laban from 1952 until his (Carpenter's) death in 1954. Together they worked on a book (still unfinished) entitled Movement Psychology proposing that personality could be determined via movement observation. Although unfinished, the duo's ideas were picked up by Yat Malmgren who used them for his work with actors. The original chart eventually came to Dianne Dulicai, who generously gave it to SCPA in 2017. 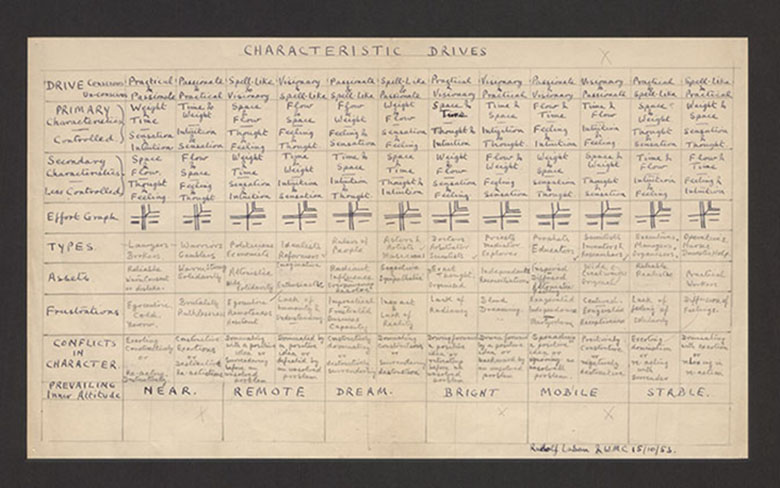 Because we rarely move with just one Effort factor, factors are often combined in twos and threes as States and Drives. States include two factors (e.g. Light Weight and Indirect Space) that create pairs of contrasting inner states: Mobile/Stable, Rhythm/Remote, Awake/Dream. Drives include three factor combinations (e.g. Weight, Space, and Time) creating four Drives (Passion, Spell, Vision, and Action). The chart demonstrates which Effort factors are foregrounded by the double lines on the graphs. it also shows terminology changes from 60+ years ago (Laban's 'Bright' versus 'Awake' State).