Because of her studies with Laban when Bartenieff left Germany it was with the understanding that she would be one of the few Laban ‘disciples’ to disseminate his theories. Thus, when she arrived in the USA, Bartenieff taught Labanotation and Movement Analysis at the New School for Social Research in New York and the Lieberman School in Sturbridge, Massachusetts. A ‘living’ rather than static notation system, the development of Labanotation into a standardized format was due to two organizations with which Bartenieff had ties: the Dance Notation Bureau (DNB) in the USA and the International Council on Kinetography Laban (ICKL) in Europe. Bartenieff was an early member of both groups where she taught and worked with colleagues such&nbsp;as Ann Hutchinson(Guest), Albrecht Knust, Lisa Ullmann, Marion North, and other Laban associates. In addition to her studies at the Laban School in Munich, Irmgard attended the Choregraphisches Institut Laban, Wuerzburg,in Berlin where she earned a diploma in dance notation and movement analysis. 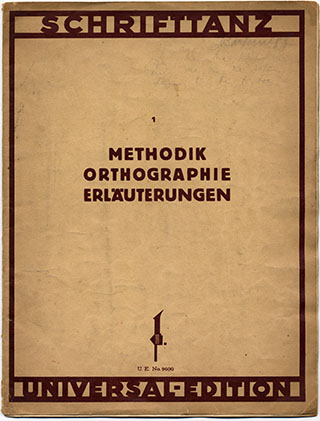 Before it became Labanotation as we know it, Bartenieff learned Laban's first notation system: Schrifttanz, or 'Written dance'. In 1926 Laban produced a manual describing the method and symbols for his written system, several pages of which are shown below. You can click on the images (including this cover image) to see a larger version of each page.

Later Bartenieff worked with Albrecht Knust to complete notations based on American artist Hubert Stowitts' paintings of 55 American athletes displayed in Berlin for the 1936 Olympics. The exhibit of the paintings of nude athletes was removed by the Nazi regime due to the inclusion of Jewish and Black subjects. It is unknown as to why Bartenieff noted '50' athletes rather than the 55 Stowitts painted. Bartenieff's collection contains 44 notated scores. Two typed pages, along with two drafts, are shown here (dates unknown, assumed post-1935).