Furnishing Home Away From Home

In addition to building housing complexes, the Design Branch was responsible for designing thirty individual furniture pieces to be placed in every housing unit. In order to meet this high demand, the Design Branch mobilized approximately three hundred furniture manufacturers from around the nation. Japanese craftsmen applied their traditional expertise to the design and construction of Western furniture. The Design Branch’s high product testing standards and regular delivery deadlines quickly reenergized impoverished manufacturing firms, which enabled a smooth transition from war production to peacetime industry.

Constructing a U.S. standard of living for the American occupiers resulted in a variety of innovations and promoted the Americanization of many Japanese households. Japanese consumers were especially attracted to modernized kitchens with advanced electric appliances. Japanese construction industries refined their manufacturing techniques and accelerated mass production, which made their products affordable to the local population. Major Heeren Krusé, Chief of the Design Branch, noted that the U.S. military housing model became “the forerunner of a new house and a new way of living for the Japanese people.”

“By manufacturing furniture for U.S. military family houses, we will learn foreign lifestyles and contribute to the internationalization of Japanese industrial arts.” 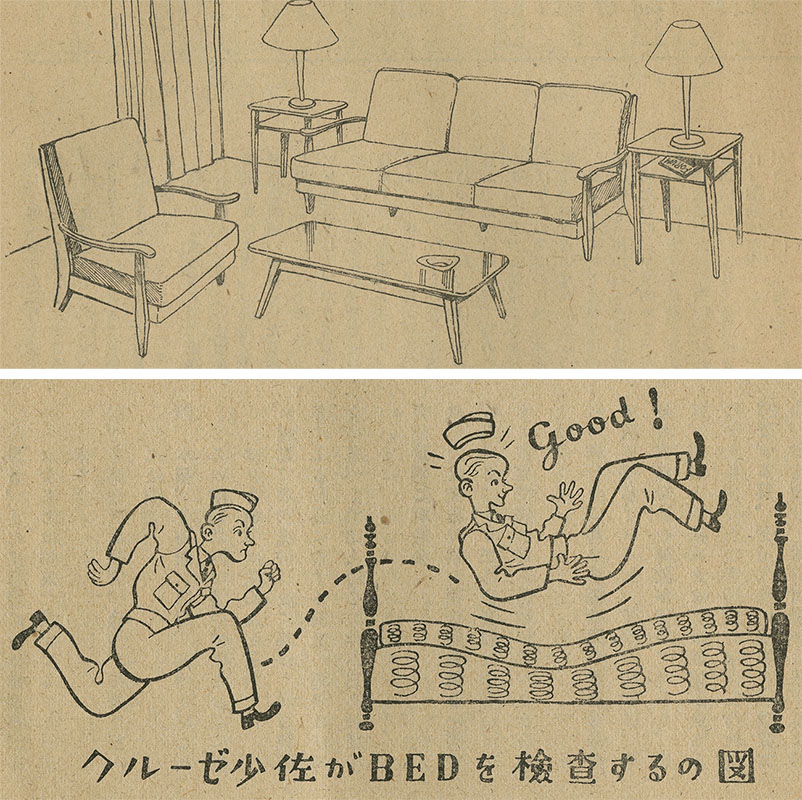 A series of articles on the Exposition of Modern Interior Decoration were published in the newspaper, Sekai Nippō (a sponsor of the event) between July 21 and July 30, 1948. Re-creations of entire rooms from a typical American house were on display at the exposition. The idea was to view life in America as it was lived, which, according to the article on July 21, “celebrates simplicity, comfort, and beauty.”

Nowhere in the articles was dependents housing explicitly mentioned. However, according to the editor of the newspaper in an article published on July 23, the purpose of the exposition was to showcase the revival of industrial arts in Japan and the many wonderful items made in Japan for both export purposes, as well as for the Occupation Forces. “We thought that we could learn from the simple, yet beautiful American way of life,” he wrote, “and that we could use that knowledge to chart our future.”

Tens of thousands of people viewed the exposition each day. It was so popular that its run was extended by five days.

The Imperial Family publicly expressed interest in modern American design and lifestyle. Princess Taka, one of the daughters of Emperor Hirohito, visited the exposition. At the time, she was in “bride training,” when a young girl learns how to be a good housewife. Her “trainer” accompanied her. The Princess was particularly impressed by the modern kitchen. Prince Takamatsu, a younger brother of Emperor Hirohito, and his wife, Princess Takamatsu, also visited the exposition.

An advertisement for the Exposition of Modern Interior Decoration at the Mitsukoshi Department Store in Tokyo, July 21 - August 5, 1948. 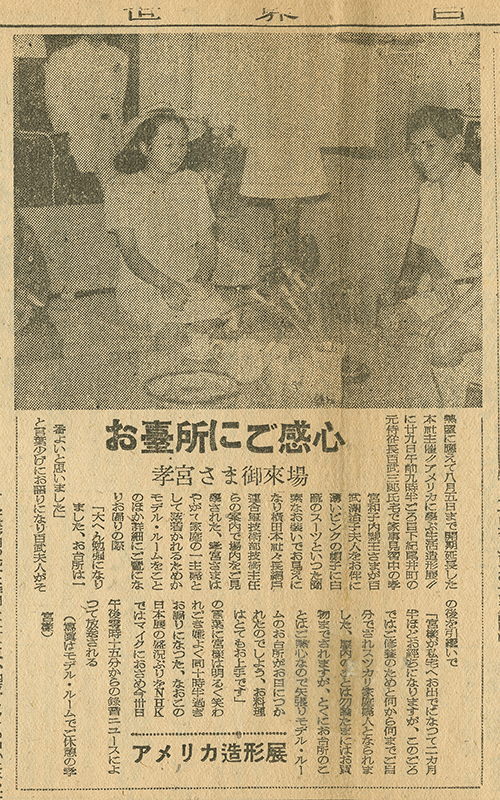