While the Prange Collection holdings reveal the voices of many Japanese during the period 1945-1949, there existed as many other Japanese voices that were unheard or suppressed. The U.S. military required and controlled censorship review for all publications, including books, newspapers, magazines, even grade school and local community newsletters. The Civil Censorship Detachment (CCD), one of the military intelligence units, issued the Code for Japanese Press in September 1945, which essentially subsumed press freedom to the authority and the needs of the U.S. military. The CCD periodically issued a list of banned topics, known as Key Logs. The list included GIs’ fraternization with Japanese women and black market activities, among other topics. These topics offer a window into the realities of everyday lives outside the U.S military family complexes. Yet since writing on these subjects was censored, it can seldom be found in popular publications. 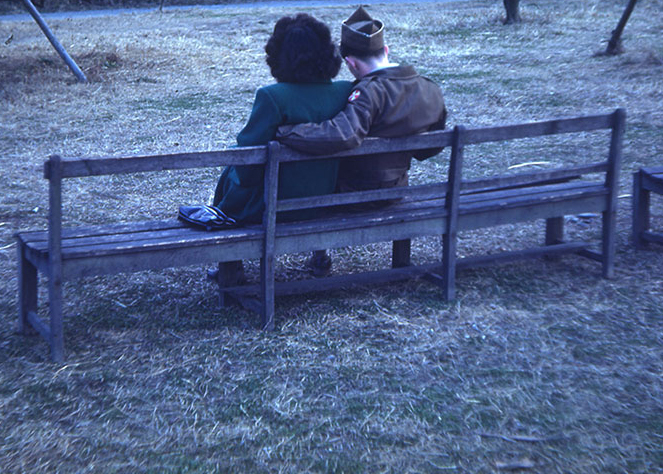 An American GI and a Japanese woman, Mary Koehler Slides 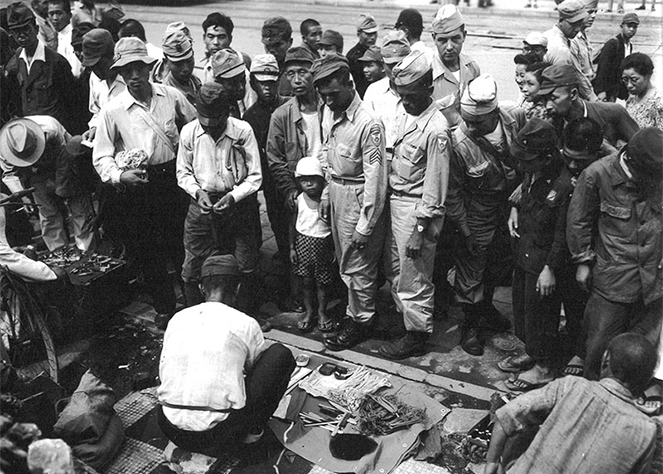 A market on the streets of Tokyo just weeks after the end of the war, 1945, National Archives and Records Administration.

Fraternization between American servicemen and Japanese women was not immediately prohibited upon arrival of the Allies in Japan in 1945. But in early 1946, when venereal disease rates were alarmingly high, non-fraternization policies were put into place. They remained in effect until the end of 1949. During that period, CCD examiners were instructed to delete references to fraternization in print publications. Casual contact between GIs and Japanese women continued to occur, in spite of the restrictions, and American soldiers courted and married Japanese women. A 1947 amendment to the War Brides Act enacted on December 28, 1945, allowed Japanese wives of American servicemen to immigrate to the United States. Approximately 50,000 Japanese women immigrated to the U.S. as war brides between 1947 and 1965.

Due to widespread food shortages in Japan during World War II and the years immediately following, black markets proliferated in Japan’s cities, especially on the streets of Tokyo. The scarcity of food and other products led to what was referred to as the “onion” or “bamboo shoot existence.” People were forced to peel off and sell layer after layer of their clothing in order to survive. The Japanese government instituted a rationing system for basic foodstuffs, like rice. Rice was purchased from farmers by the government, which then oversaw its distribution. Competing with the black market, however, was almost impossible. In June 1946, rice sold on the black market for thirty times more than the rice rationed by the government. Coveted items purchased by Americans GIs at the PX, such as cigarettes, chocolate, and women’s stockings, were common currency on the black market. In an effort to discourage trading on the black market and the accompanying underground economy, GHQ/SCAP censored coverage of the black market in print publications. The Code for Japanese Press 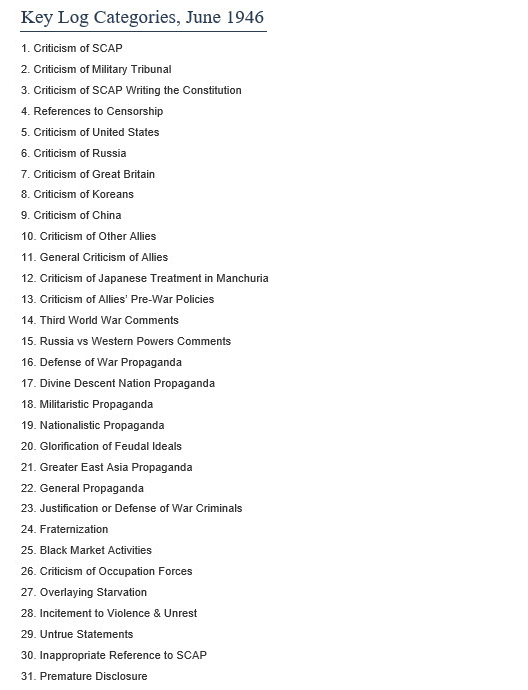