"I Believe This Radio Work Has A Great Future"

The University of Maryland participated in radio for nearly a decade before developing a station of its own. Beginning in 1935, Baltimore station WBAL granted the university a weekly, 15-minute time spot, which mostly featured farming and agricultural reports from the Extension Service staff. Additionally, UMD President Harry Clifton Byrd appeared on the radio to promote the university's accomplishments and the university band often performed as well. Maryland was also invited annually to participate on the Land Grant College Radio Hour in conjunction with the National 4-H Club, and contributed to other national educational programs such as Campus Theatre of the Air.

In March 1937, the Columbia Broadcasting System (CBS) offered to donate studio equipment to the university to encourage career training for men and women interested in radio. CBS wanted college graduates to "step right off the campus and take their place before the microphone," and the University of Maryland was the first college in the country to agree to offer such training with industry supervision. Under the Department of Speech, the first class in radio broadcasting appeared in the fall 1938 curriculum. "SPEECH101: Radio Speaking" was a laboratory course that offered "practice in program planning, continuity writing, announcing and news reporting" with "actual participation in broadcasting at station WJSV in Washington." 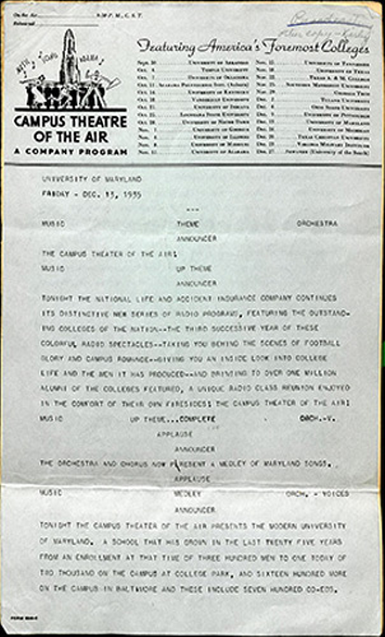 Script from Maryland's program on Campus Theatre of the Air, December 13, 1935 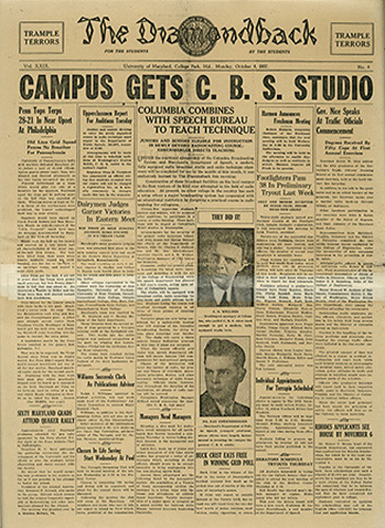 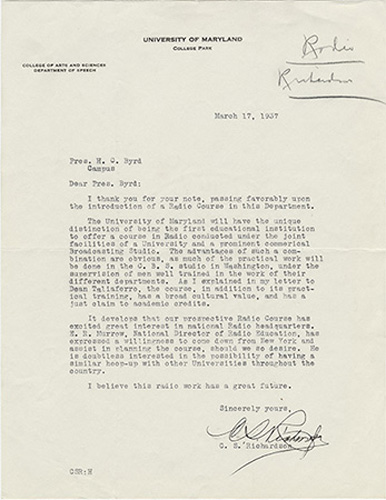 Letter from Charles S. Richardson, Professor of Speech, to University President H. C. Byrd on the possiblity of creating a radio program at Maryland, March 17, 1937 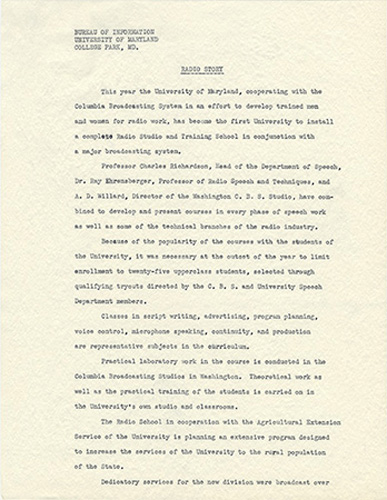 University of Maryland press release announcing the inauguration of the radio program, 1937, page 1 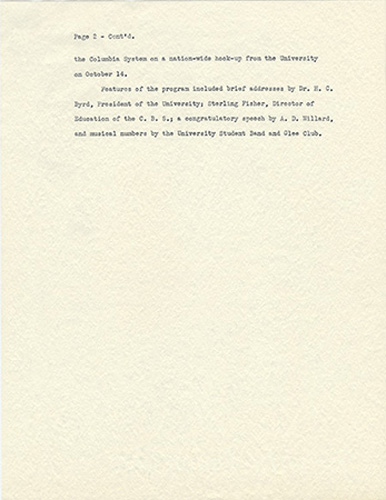 University of Maryland press release announcing the inauguration of the radio program, 1937, page 2 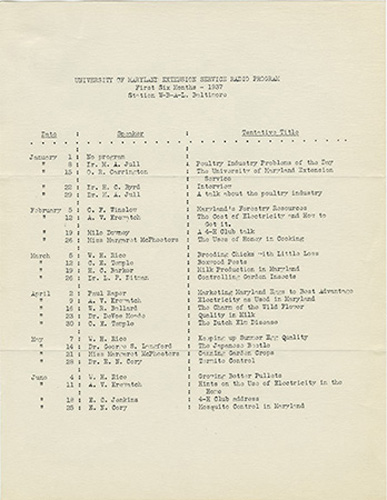 The campus radio station at Maryland has two beginnings. In 1942, student-run Old Line Network began daily broadcasts. Chemistry student Gilbert Cullen enlisted the help of George Reynolds, a senior electrical engineering major, to build the first campus station, which sent a radio signal to campus buildings via the currents running through the network of wires that connected them. Because broadcasts were limited to campus only, the station did not require an FCC license to operate. Maryland became the fifth student-run campus station on the east coast. The Old Line Network was well-received, but it did not remain in operation for long. World War II saw most of its technical personnel enlist in the armed forces, and the station shut down in January 1943. The station was re-launched in 1948, with students initially planning to use the call letters WUOM before changing to WMUC. (This is likely because the FCC granted the University of Michigan an FM license to broadcast as WUOM in that same year.)

The first WMUC broadcast aired on October 11, 1948. However, the station was shut down three days later due to poor transmission. The problem was solved with rewiring and relocation, and the studio moved from the classroom building of the Speech Department to the basement of Silvester Hall in the spring of 1950. That fall, the station moved again to a renovated shower stall in Calvert Hall. In 1953, WMUC relocated to Building FF, the old Journalism building, where it remained for the next 20 years. In the fall of 1974, the studio relocated to the third floor of the South Campus Dining hall, where it continues to reside today. 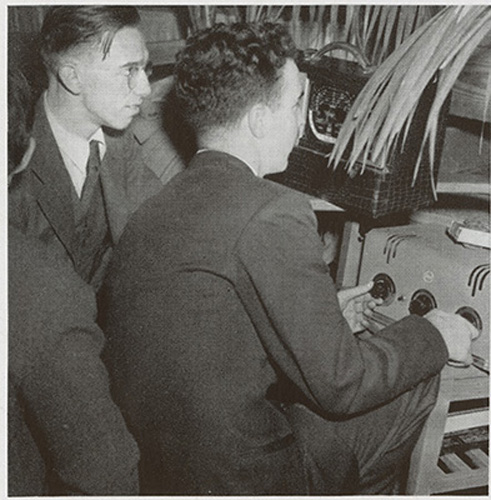 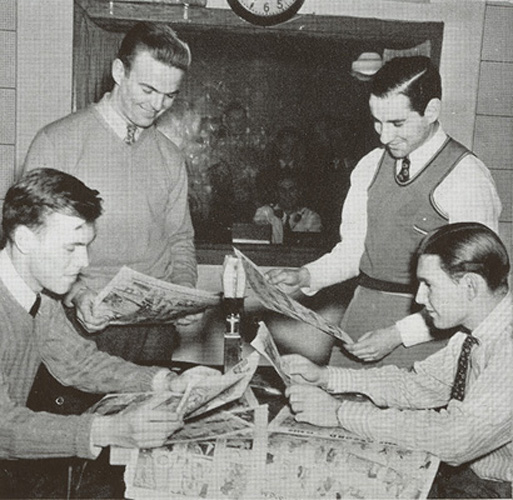 Students read the funnies on the air, 1943 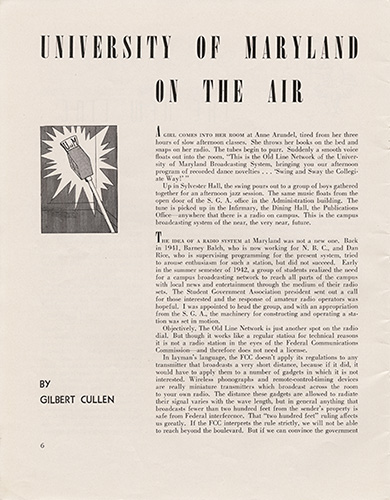 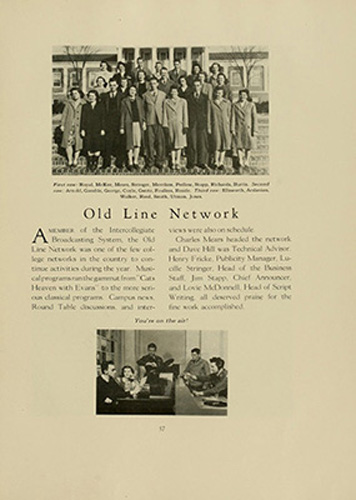 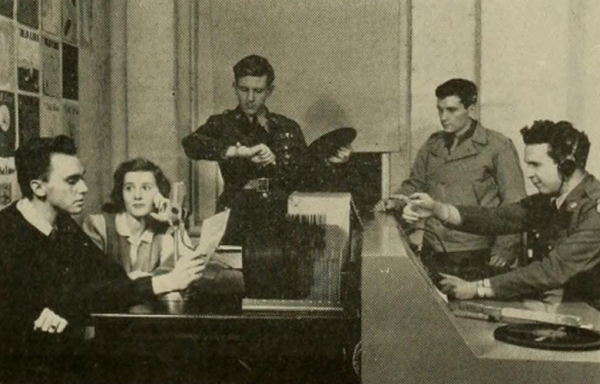 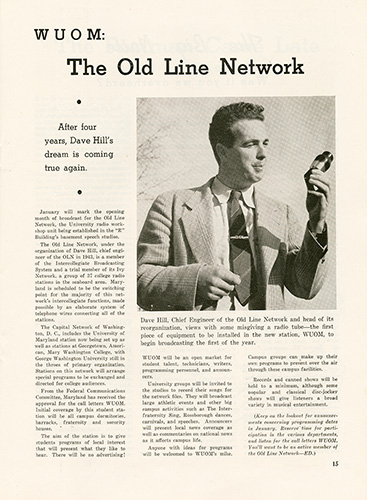 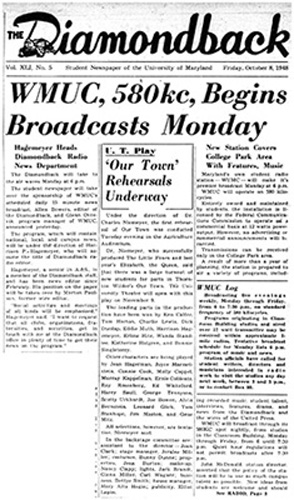 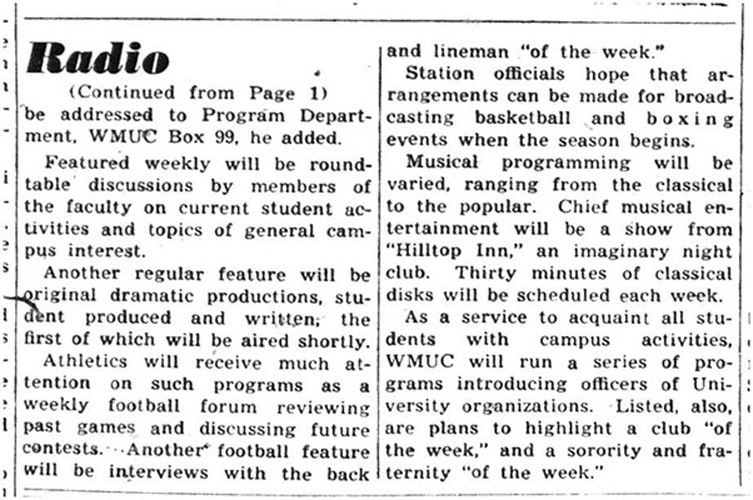 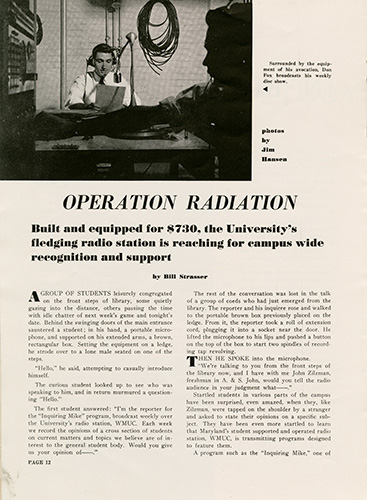 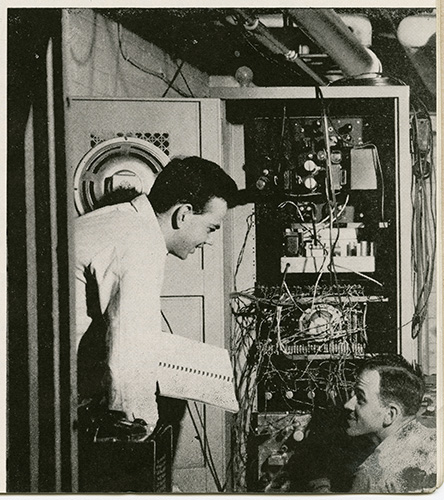 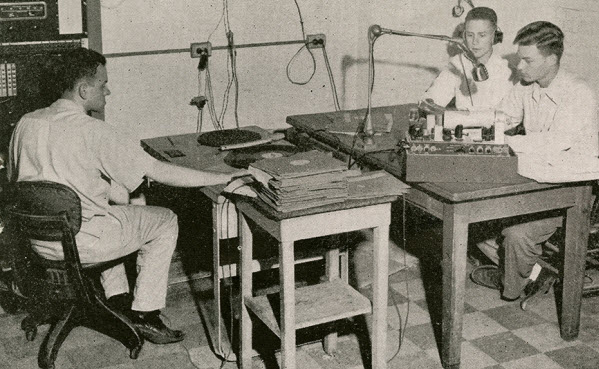 Programming Director Marty Rosenstock proudly aired this announcement on September 10, 1979, inaugurating WMUC's first broadcast as a 10-watt, FM-licensed station. It was a hard-won victory. In 1974, station manager Mike Collins submitted a report to University Chancellor Robert Gluckstern outlining the reasons for establishing an FM station. Among them were ongoing problems with interference on AM, the prospect of reaching a larger audience and the growing popularity of FM stereo broadcasting. In addition, for many of the DJs, having a place on the public airwaves would legitimize WMUC as a real station. Gluckstern endorsed the university's application for a non-commercial, educational FM license and submitted it to the FCC in 1975.

FCC approval was delayed, however, due to application errors. The biggest issue was that the requested frequency of 87.9 was too far below the FM range. Despite an endorsement from the Corporation for Public Broadcasting to expand this range, a second application was denied in 1976. In 1977, WMUC rallied public support with its "FM or Bust" campaign, amended its request for the 88.1 frequency and re-submitted it application in 1978. The FCC's approval finally arrived in spring 1979, and the construction permit to install the antenna soon followed. After a five-year struggle, WMUC-FM debuted that fall. 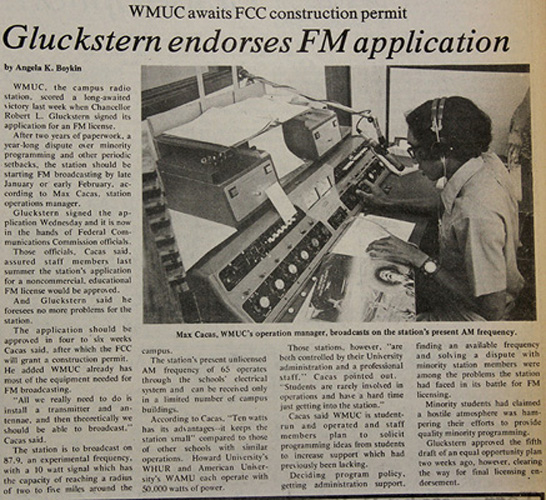 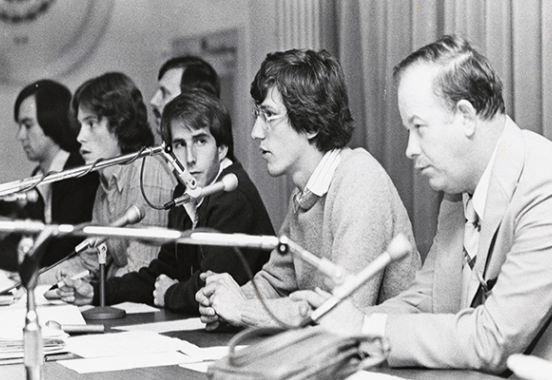 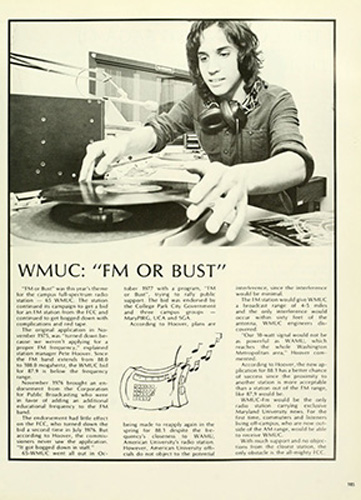 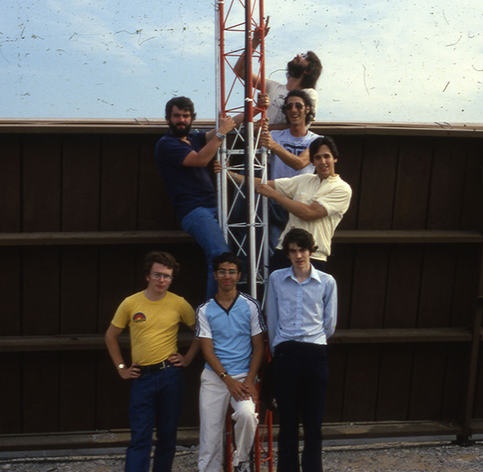 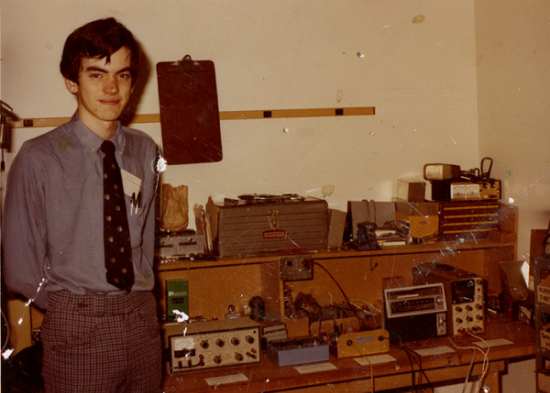 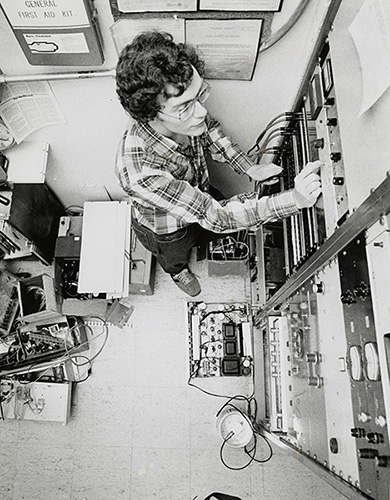