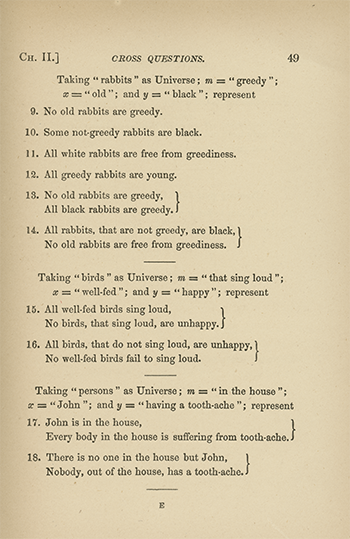 Lewis Carroll’s accomplishments extended far beyond his talents as a writer. Before he gained fame as the author of the Alice books, Carroll was a respected mathematician, logician, and avid photographer.

Mathematics was not only Carroll’s means of making a living as a lecturer at Christ Church, but a lifelong passion. He is said to have begged his father at a very young age to explain logarithms to him. Carroll wrote numerous texts on algebra, geometry, trigonometry, and higher mathematics, and made important contributions to subjects such as voting systems and tennis tournament scoring.

Carroll greatly enjoyed recreational mathematics and invented scores of imaginative puzzles, games, ciphers, and mnemonics. In the field of logic, he developed an ingenious way of drawing inferences using diagrams. However, his work in logic was not always taken seriously because he devised humorous examples. A typical Carroll syllogism, or logical argument, reads:

All babies are illogical.

Nobody is despised who can manage a crocodile.

Similar playful logic can be found in Alice’s Adventures in Wonderland and Through the Looking-Glass.

Carroll took up photography in 1856, while the art form was still in its infancy. The wet collodion process that was used at the time was a demanding method of processing photographs, which suited Carroll’s patient and meticulous nature.

In 1880, Carroll gave up photography as the wet collodion process was replaced by a dry process. This new simplified process was dismissed by Carroll, who felt the artistry was lost now that anyone could be a photographer. He nevertheless remains one of Britain’s leading photographers of the 19th century.

Select a title below to explore mathematical works by Lewis Carroll.