Beyond the Books: Alice in Popular Culture

Alice’s Adventures in Wonderland and Through the Looking-Glass have become fixtures in the world of popular culture. From political satire to commercial advertising, the characters of Wonderland have been transformed time and time again, finding new audiences across generations.

When Alice’s Adventures in Wonderland moved out of copyright in 1907, writers and illustrators acquired unbridled license to create new versions of the story and characters. The Disney Company, both with its 1951 Alice cartoon and then the Tim Burton film some 59 years later, has done much to make Alice a familiar and timeless character.

Countless performers, musicians, and artists have likewise reinvented Lewis Carroll’s stories in new and exciting ways. Some connections are obvious, such as the Jefferson Airplane song “White Rabbit,” while others are more subtle, such as the influence of Alice-related themes in the Wachowski brothers’ Matrix trilogy.

With Alice being used to sell everything from automobiles and appliances to laxatives and instant pudding, audiences are drawn to the boisterous, fanciful, and whimsical appeal of Carroll’s Wonderland. It is both a familiar touchstone, as well as an endless source of creativity and inspiration for a wide variety of artists, advertisers, and designers.

Select a topic below to explore Alice ephemera. 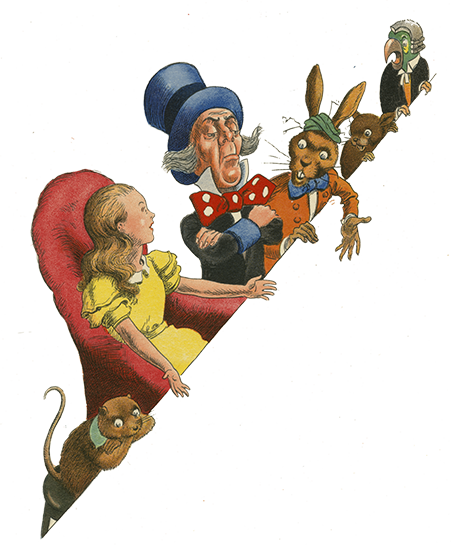 Select an Image Below