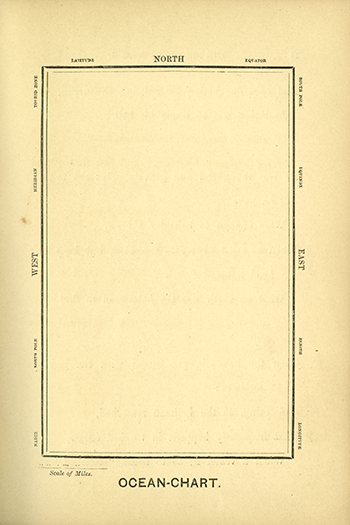 Beyond Alice: The Poetry and Fiction of Lewis Carroll

In addition to the Alice books, Lewis Carroll wrote a number of other works of poetry and fiction. He wrote and illustrated his first “book,” Useful and Instructive Poetry, in 1845 at the age of 13. Written to entertain his family, especially his brother Wilfred and sister Louisa, it would be published posthumously in 1954.

The most famous of Carroll’s non-Alice works is his 1876 nonsense poem The Hunting of the Snark: An Agony in Eight Fits. It is an epyllion, or short narrative poem, in which a crew of eight follows their leader, the Bellman, in search of the mythical Snark creature.

To catch the Snark, the hunting party must cross the sea—a scene described and illustrated with quintessential Carrollian wit (see illustration to the left):

He had bought a large map representing the sea,
Without the least vestige of land:
And the crew were much pleased when they found it to be
A map they could all understand.

“What’s the good of Mercator’s North Poles and Equators,
Tropics, Zones, and Meridian Lines?"
So the Bellman would cry: and the crew would reply
“They are merely conventional signs!”

“Phantasmagoria,” a long humorous poem about ghosts, was first published in 1869 in a volume which included several shorter poems. “Phantasmagoria” and The Snark were both reprinted in Rhyme? And Reason? (1883). It also included new works such as “Hiawatha’s Photographing,” a brilliant parody of American poet Henry Wadsworth Longfellow’s famous poem.

Toward the end of his life, Carroll published a long, two-part novel quite different from Alice titled Sylvie and Bruno (1889) and Sylvie and Bruno Concluded (1893). The plot takes place in England, Fairyland, and Outland, whose society is an exaggeration of the real world and Carroll’s own institution—Oxford University. Written for both adults and children, the books pleased neither. However, the unconventional plot structure influenced the work of other writers, including James Joyce.

Select a title below to explore works by Lewis Carroll.