“and what is the use of a book,” thought Alice, “without pictures or conversations?”

Alice Illustrated Around the World

At the beginning of the story, Alice muses about the importance of illustrations in capturing a reader’s attention and imagination. Unusual for British children’s literature during the Victorian era, Carroll’s tale is neither moralistic nor instructional. Alice’s Adventures in Wonderland and Through the Looking-Glass were part of a burgeoning literary genre which aimed to capture a child’s imagination, often through the use of illustrations. The result is a timeless tale, recognized across the world for its artistry and wordplay.

John Tenniel, Carroll’s hand-picked illustrator of the Alice books, was able to capture the peculiar, over-the-top characters of Wonderland, incorporating both nature and humor into highly detailed illustrations which complement Carroll’s text so well. Ever since, the success of Alice’s story has been deeply connected to its artwork.

Carroll’s text itself provides few visual cues about the world of Wonderland. For Alice, Carroll tells us only that her hair is straight; she has a pocket from which she removes the comfits and thimble after the caucus race; and she is wearing a skirt, with which she upsets the jury box at the end of the book. This lack of visual description has left great scope for countless illustrators to re-imagine Wonderland.

Alice’s Adventures in Wonderland and Through the Looking-Glass have been translated into about 170 languages and interpreted by artists from around the world, who saw their own cultural experiences reflected in Alice’s adventures. They sought to capture the curiosity and wonder of childhood, the nonsense of the adult world, and the special experience of reading Alice.

Select a region below to explore international editions of Alice listed by illustrator. 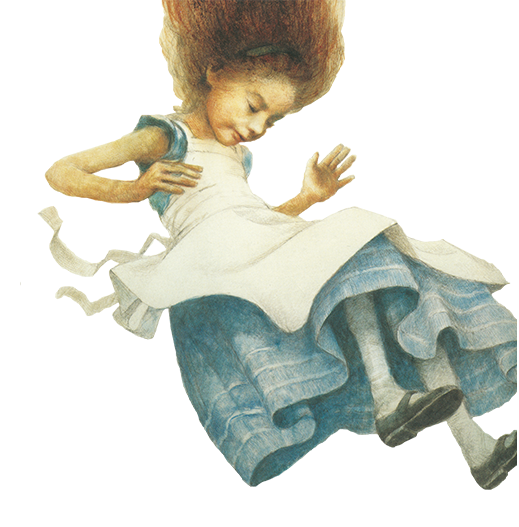