Working class Americans began enjoying leisure activities in large numbers in the late nineteenth and early twentieth century. The increasing ease of travel made possible by railroads, a growth in wages, and the advent of Saturday half day and all-day Sunday holidays in many manufacturing industries allowed workers and their families to leave urban centers in search of amusements. This demand for low cost entertainment near major cities led to the growth and popularity of amusement parks.

Less than an hour from Manhattan and costing only 25 cents to take the train or boat, Coney Island was home to several amusement parks. In the early decades of the 20th century, working class New Yorkers flocked to Coney Island, which often drew over 1 million people a day on a summer weekend. For many, it was a colorful and inexpensive post card that helped mark what was certainly a highlight of the month, if not the summer. On a single day in 1906 visitors mailed an amazing two hundred thousand cards. These cards highlight the fantastical architecture, mechanical thrills, exotic sideshows and other attractions that made Coney Island the iconic American amusement park.

City dwellers left New York for the day, escaping the drab existence of city life, to take advantage of Coney Island's seaside location. Visitors were drawn to the beach as well as the hustle bustle of Surf Avenue. However, the biggest draws were the three amusement parks that dominated Coney Island at the turn of the twentieth century: Luna Park, Steeplechase Park, and Dreamland, among the most extravagant, and sensational, amusement parks ever built. 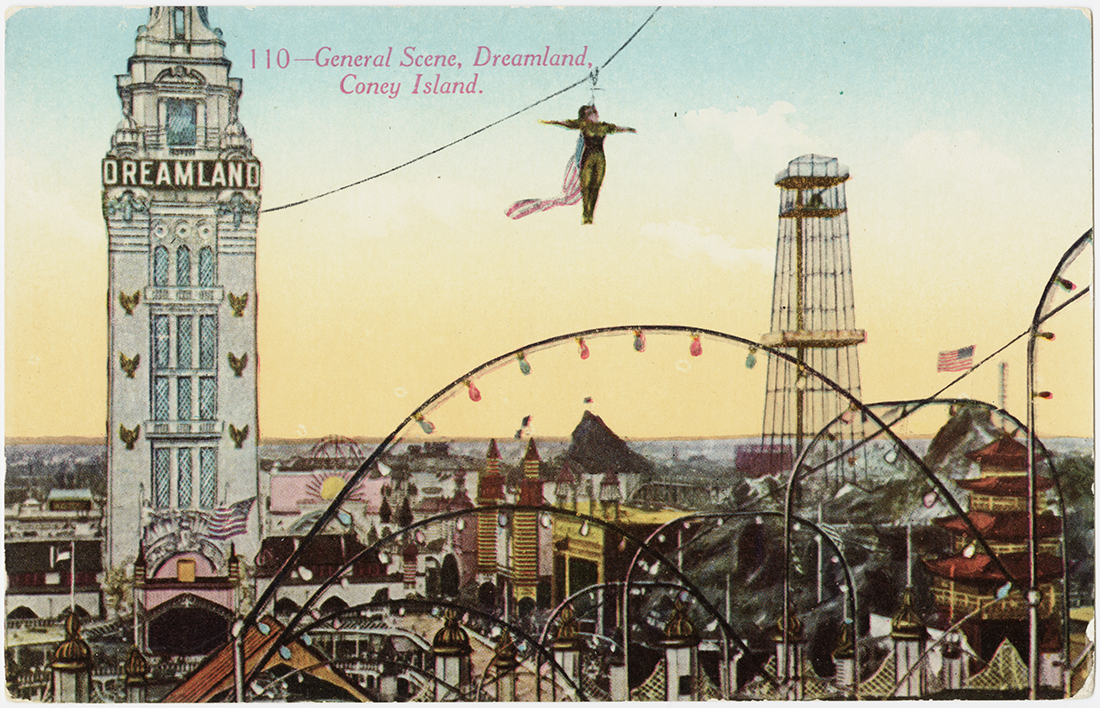 "Edna, you would have to step lively in New York.
The streets are crowded all the time great sights at Coney Island."

Postcard of Coney Island at night help capture the sense of awe, theatricality, fantasy, and mystery felt by park goers. Luna Park had more than a quarter million electric lights and Dreamland claimed that there were more than 100,000 lights on the tower alone. A visitor to Luna Park in 1904 described the park as the dusk approached:

"A long festoon of electric lights leaped from one side of the park to the other, and was followed by a second and a third. Then there was a perfect maze of them. Tall towers that had grown dim suddenly broke forth in electric outlines and gay rosettes of color, as the living spark of light traveled hither and thither until the place was transformed into an enchanted garden, of such a sort as Aladdin never dreamed." (Albert Bigelow Paine, Century Illustrated Magazine, August 1904)

Publishers of these night time scenes created postcards that conveyed the excitement, illusion, and fantasy of Coney Island which was often intensified by additional visual effects such as glitter. 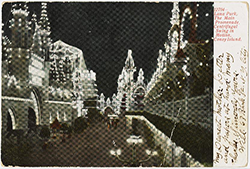 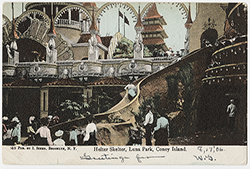 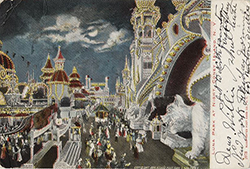 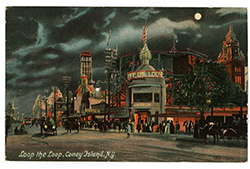 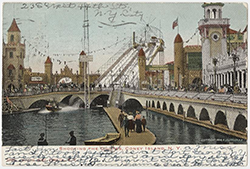 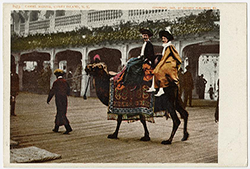 Fred Thompson, the designer of Luna Park, said that “everything must be different from ordinary experience” and the parks were designed to be bizarre and exotic. Postcards of Coney Island show architecture that evoked foreign lands where visitors could pay to ride camels and elephants. Other attractions provided visitors an illusion of death and destruction through recreations of disasters such as the 1889 Johnstown Flood. Finally, the parks were designed to thrill through rides such as Shoot the Chutes. Postcards of some rides, such as the Steeplechase, suggest that its popularity came from the opportunity for close physical contact between the sexes, while the Helter Skelter titillated by revealing women’s legs and underclothes.

The intense sensations of being jolted, whirled, and thrown together gave a sense of freedom and exhilaration missing from most people lives. It is no wonder postcards from Coney Island were sent not only as a way of sharing rare experiences but also as a way of savoring and remembering a visit to an amusement park and the escape it offered from the humdrum of everyday life. 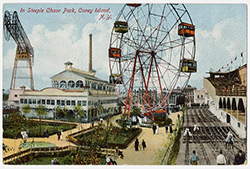 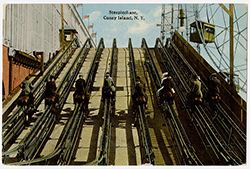 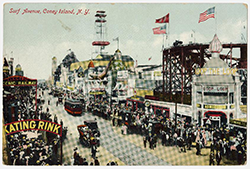 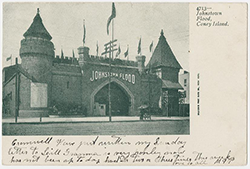 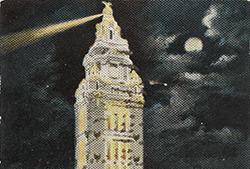 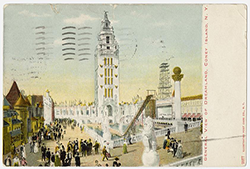 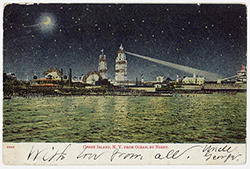 Most of the early parks started as shady picnic groves and grew to include mechanical rides, dance halls, boat rides, restaurants, and other resort facilities. Postcards preserve views of parks such as Willow Grove, which maintained a refined and more family friendly atmosphere than Coney Island.

But most amusement parks, especially those of the Midwest, were modeled on New York's Coney Island. Fantastical architecture like that of Coney Island is evident for example in the card featuring Cleveland, Ohio's own Luna Park. As at Coney Island, visitors to other parks could satisfy their curiosity for the exotic through stylized interpretations of other cultures. 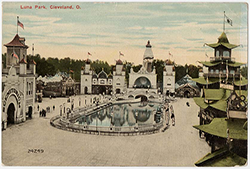 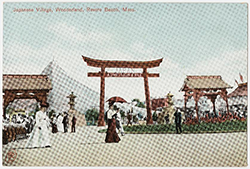 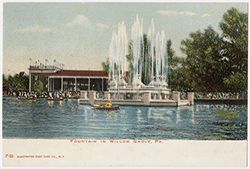 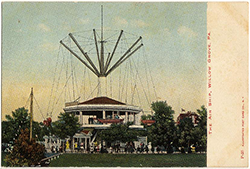 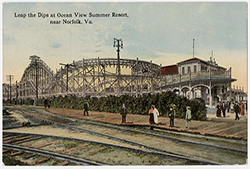 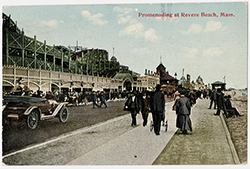 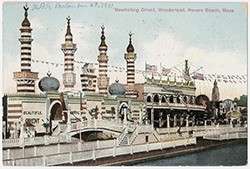