Vacation travel and sending postcards. For many, these two activities are inseparable.Travelers love to pick-up souvenirs of a memorable experience perhaps as keepsakes or to share with others. A picture postcard usually captures an evocative image and offers the convenience of an inexpensive way to send a brief message in an easily mailed format. The impulse to capture and share the essence of a place continues today. Modern portable technologies allow almost anyone to snap a photo and send the picture with a short message. This same desire propelled picture postcards into the center of American culture after they first appeared in the 1890s. If a picture tells a thousand words, then the millions of postcards sent over the past century suggest that postcards are a significant source for understanding how Americans spent their leisure time.

In the second half of the 19th century, Americans began traveling for purposes other than necessity in ever increasing numbers. Several social and economic factors contributed to the phenomenon of travel for leisure. America's emergence as an industrial and economic power meant that a growing middle class had the means to pursue a life style beyond mere subsistence. One of the products of the country's industrial might was a network of railroad lines, which efficiently moved goods and people over long distances. Post-Civil War America also was a place where people increasingly were aware of the significance of places worth visiting. The centennial of 1876 had been a national birthday party celebrating America’s many natural wonders and man-made achievements.

As travel for leisure accelerated, an entire commercial infrastructure emerged to serve vacationers. Souvenirs commemorating a visit were a central aspect of the travel experience, and pictorial representations of places soared in popularity. New developments in photography and color printing technology allowed for inexpensive reproductions of pictures. All of these developments formed the context for the adoption of the picture postcard by Americans on vacation. 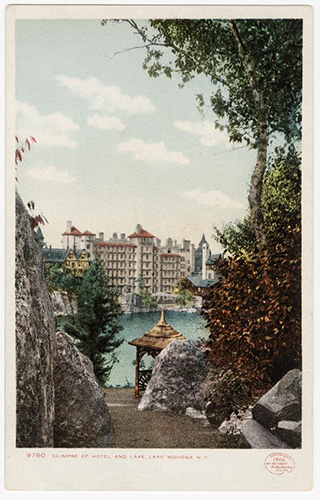