Who was William Morris? 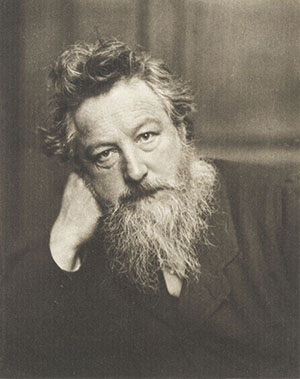 Artist, author, social activist, teacher, designer, craftsman, printer, bibliophile, preservationist, translator, and literary scholar are just some of the terms that describe William Morris. But his greatest achievement was as a creative visionary who acted on his beliefs and produced beautiful things.

William Morris the visionary sought to make the world a better place and return to an idealized society inspired by the aesthetic of the Middle Ages. Through his study of culture and history, Morris came to believe that people in the Middle Ages lived meaningful lives because they worked in harmony with beautiful handcrafted objects, art and buildings. This vision animated his quest to revive traditional crafts and preserve the literary, artistic and architectural legacies of the medieval world.

Morris developed his vision in the context of the Industrial Revolution of the nineteenth century. Thus he stands as among the first to articulate a cultural critique against the dehumanizing impact of mass production. And he was not alone in his views. William Morris inspired many with his vision for how we might live, which remains relevant in a world where we continue to debate the merits of modernity, class distinction and corporate dominance.

"If others can see it as I have seen it, then it may be called a vision rather than a dream."