The Protection of Ancient Buildings: Morris as Preservationist 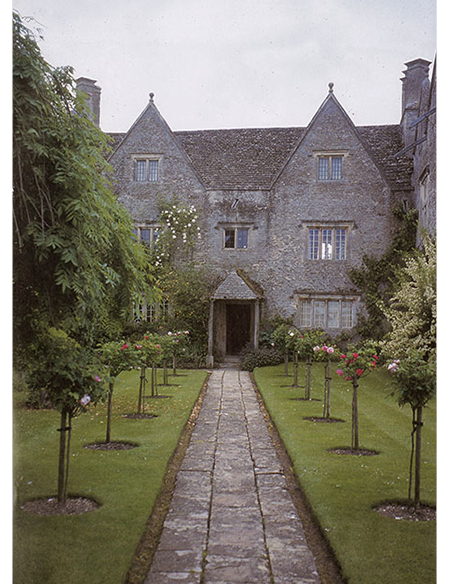 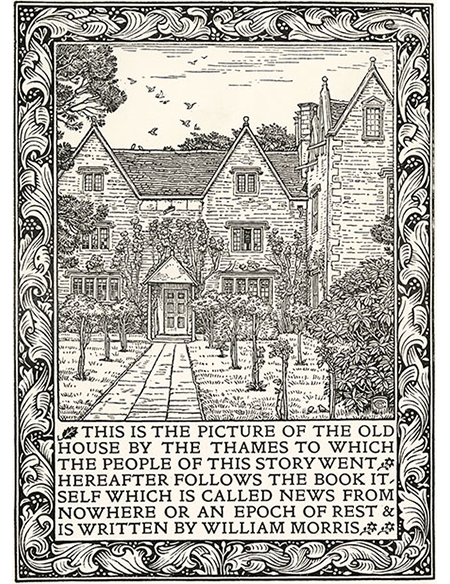 William Morris was a born organizer. He often attempted to galvanize public opinion for important causes by forming advocacy groups. His love of architecture and disdain for the kind of building restoration he saw on prominent landmarks inspired him to found the Society for the Protection of Ancient Buildings (SPAB) in 1877. Morris's vision for preserving historic buildings owed much to the influence of the noted art critic, John Ruskin. Ruskin and others celebrated the architecture of the Middle Ages, but were disturbed by elements of the Gothic Revival, a style popular throughout most of the nineteenth century.

While the Gothic Revival drew renewed interest to the medieval aesthetic, some architects sought to restore old buildings to an ideal state by removing original detail and adding new construction- trends Ruskin and Morris both found troubling. Morris championed an alternative building preservation model based on retaining all surviving building fabric, no matter how flawed by the passage of time, while employing minimal, non-intrusive reinforcement of the existing infrastructure to prevent future damage. He coined the name, "Anti-Scrape Society" for the SPAB, a humorous shorthand that embodied his philosophy of honoring the artisans who constructed old buildings by preserving their work without alteration.

Morris lived his vision by purchasing and preserving his beloved summer home, Kelmscott Manor. A late sixteenth-century farmhouse in Oxfordshire, Kelmscott Manor had survived largely unchanged from its original state, embodying Morris's ideal of authentic craftsmanship. Today organizations such as the SPAB, the British National Trust, and the National Trust for Historic Preservation in the United States have adopted Morris's ideas and teach practices that help preserve historic structures for the benefit of future generations.

These images depict Kelmscott Manor, the beloved country home that Morris preserved for his family and posterity. The image above shows a woodcut designed by C. M. Gere for the Kelmscott Press edition of News from Nowhere. The photograph to the right shows Kelmscott Manor as it appears today.

"Ancient buildings are...sacred monuments of the nation's growth and hope..." 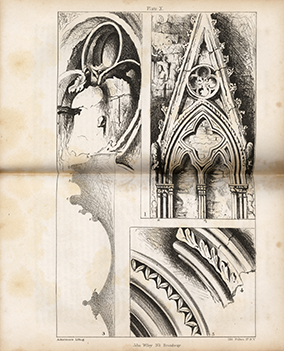 The Seven Lamps of Architecture

The Stones of Venice, vol. II

While The Seven Lamps of Architecture introduced Ruskin to Morris, The Stones of Venice articulated a connection between art and society, and revolutionized Morris's thinking. The chapter entitled "The Nature of Gothic" convinced Morris that "art is the expression of man's pleasure in labour." 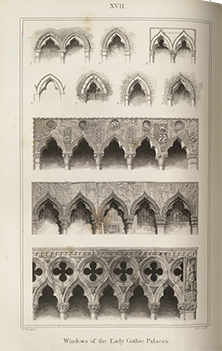 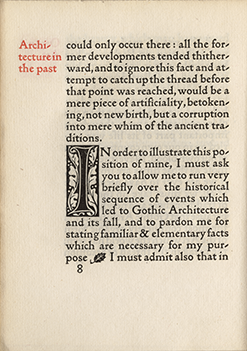 Gothic Architecture: a Lecture for the Arts and Crafts Exhibition Society

Forty years after reading Ruskin, Morris delivered a lecture on the history and merits of gothic architecture. This topic was so important to him that he included his lecture among the publishing projects of the Kelmscott Press.

Architecture and History, and Westminster Abbey

The Chiswick Press also recognized Morris's role in the historic preservation movement, issuing "Architecture and History," a lecture Morris gave in his capacity as a member of the Society for the Protection of Ancient Buildings. 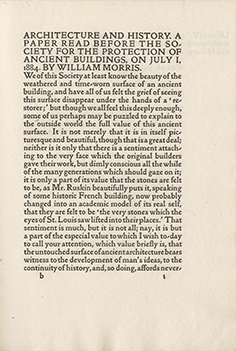 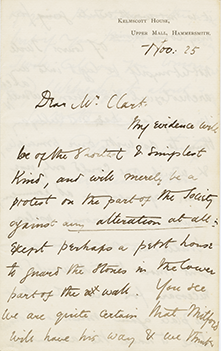 Writing to Clarke about an unidentified structure, Morris makes clear his objection to "any alteration at all" of the original framework. This advice reflects a guiding principle of the Society: "resist all tampering with either the fabric or ornament of the building as it stands."

Since its founding, a primary goal of the Society for the Protection of Ancient Buildings has been to educate the public of the importance of protecting architectural and artistic heritage. This book of published lectures discusses the value of historic materials as varied as Italian fresco paintings, Egyptian hieroglyphics and medieval parish churches. "Surely it is the duty of each one of us," says the preface, "to strive that this heritage may pass on to our successors unimpaired in beauty and no less instructive to them than it has been to us." 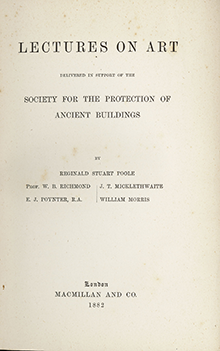