Women on the Border

Women and the War

The sesquicentennial of the American Civil War provides the opportunity for our country to take another look at the history we all think we know very well. In the past, most histories of the Civil War have focused on the perspectives of white, male participants in the conflict. Black participants, civilians, women, and children were pushed to the border of the historical discussion. In recent years, however, historians have begun to explore the Civil War experiences of these important groups, and innovative scholarship in these areas is flourishing, although much of this new knowledge has not yet entered the mainstream. This exhibition endeavors to examine one of these groups previously pushed to the border by taking a closer look at women's perspectives of the war, their roles, and their contributions to the war effort and to the future of the nation.

Although women rarely participated in the war as combatants, women, as half of the population of the United States, experienced the war in various ways and made numerous contributions to the war effort. Women were witnesses, writers, soldiers, spies, nurses, cooks, laundresses, supporters, organizers, and mourners, among many other roles. Their perspectives and contributions are no less valuable than those of their husbands, sons, brothers, and fathers who fought and died on the battlefield.

Women who lived in Maryland had unique perspectives on the Civil War. Maryland represented a microcosm of the national conflict. Women in Maryland witnessed troop movements, raids, and battles more typical of a Confederate state, but they also had a shared experience with women in those states that remained in the Union. Most women's lives before, during, and immediately after the war continued to be centered around the household and family. However, social changes initiated by the war offered women the opportunity to take leadership roles at home while their husbands and fathers were away. They became more involved in public arenas such as politics, publishing, and social welfare. In addition, women's domestic roles became more politicized during the war. Sewing, for example, took on new meaning when the shirts women stitched were destined for soldiers.

While this exhibition considers the contributions of a few famous Maryland women, such as Anna Ella Carroll and Clara Barton, it does not seek to re-examine their stories completely, which have been told countless times before. Instead, this exhibition focuses on the lives and experiences of ordinary, little-known women living in Maryland during the Civil War, using their letters, diaries, other manuscripts, photographs, sheet music, maps, rare books, and other publications, as sources. 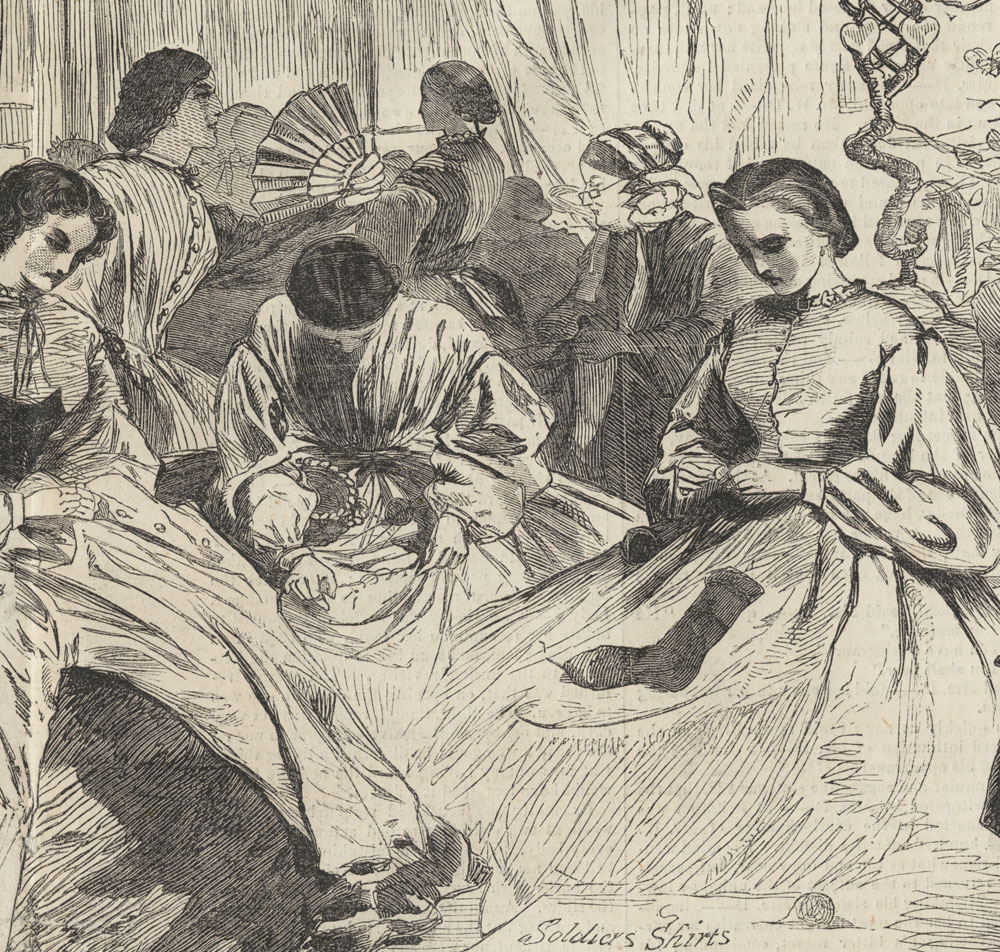 Women contributed to the war effort in innumerable ways. Women's domestic work, including sewing, took on new meaning when their labors were destined to assist soldiers.

As a border state, Maryland had an anomalous position in the American Civil War. Strategically placed directly between North and South, close to the Confederate and Union capitals (Richmond, Va, and Washington, D.C.), Maryland's geographic location set the state apart. Generally, the western and northern portions of the state identified with the Northern cause, while the southern and eastern counties identified with the South. Economically, as a busy shipping and manufacturing center, Maryland depended on both the North and the South. Much of Maryland's economy was still fundamentally based in agriculture, but in the years preceding the war many of Maryland's farmers had initiated a shift away from crops like tobacco, which required large numbers of slaves to maintain production. As the nature of slavery in Maryland changed, slave-owners manumitted (freed) slaves, sold them further south, or hired them out to skilled tradesman. Maryland did not entirely resemble the slaveholding states that seceded from the Union or the other border states of Missouri, Kentucky, and Delaware. From the 1810s to the beginning of the war, Maryland had the largest free black population of any slave state.

In the early days of the war the allegiance of the border states, including Maryland, remained in question. Baltimore, at the time the third most populous city in the country, was the scene of the first bloodshed of the Civil War. (Although shots had been fired at Fort Sumter in South Carolina on April 12, 1861, no loss of life occurred during the bombardment.) In Baltimore, on April 19, 1861, a mob of secessionists and Southern sympathizers clashed with the Sixth Massachusetts Regiment, en route to Washington via train. Four soldiers and twelve civilians lost their lives, assuring the nation that a terrible conflict had begun.

While Governor Thomas Hicks and the General Assembly remained undecided on the secession question, President Lincoln, keenly aware of the danger of being surrounded by Confederate states, ensured that Maryland remained in the Union. Lincoln suspended the writ of habeas corpus in Maryland, allowing the Federal government to assume broad powers to arrest suspected secessionists and other dissidents without charges or trial. The Federal government also stationed troops in Baltimore and Annapolis, and at strategic points along transportation routes. Some Marylanders traveled to Virginia in order to fight for the Confederacy, while many others joined the Union army. In the end, Marylanders were forced to take sides, instead of retaining their valued middle ground. 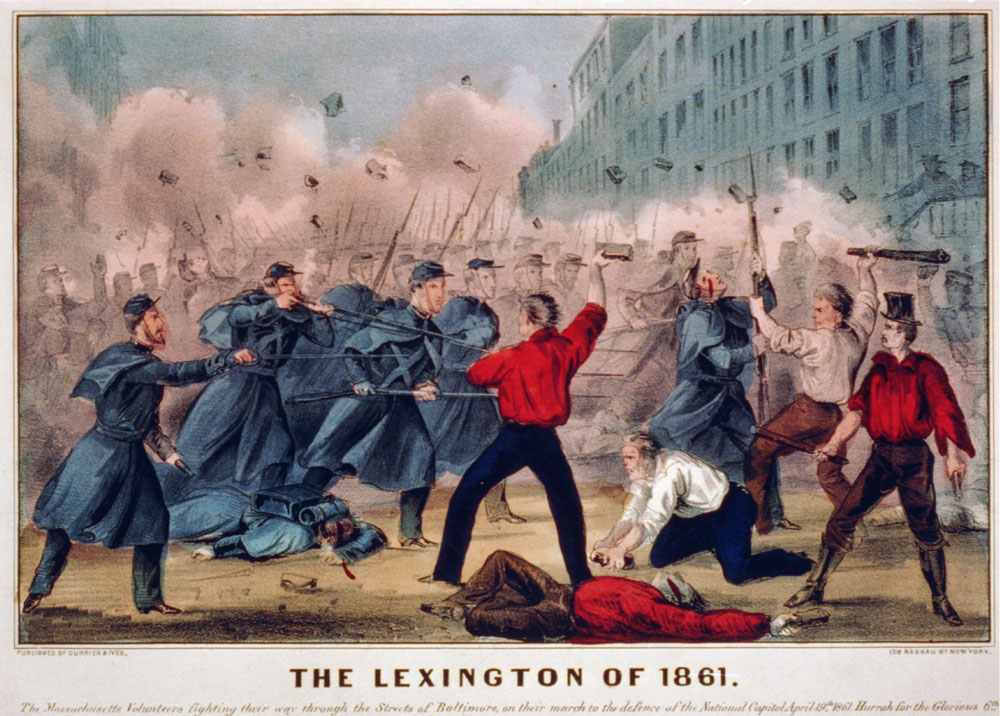 Secessionists clash with Federal troops in Baltimore on April 19, 1861.
"The Lexington of 1861," Currier and Ives, Library of Congress, Prints and Photographs Division. 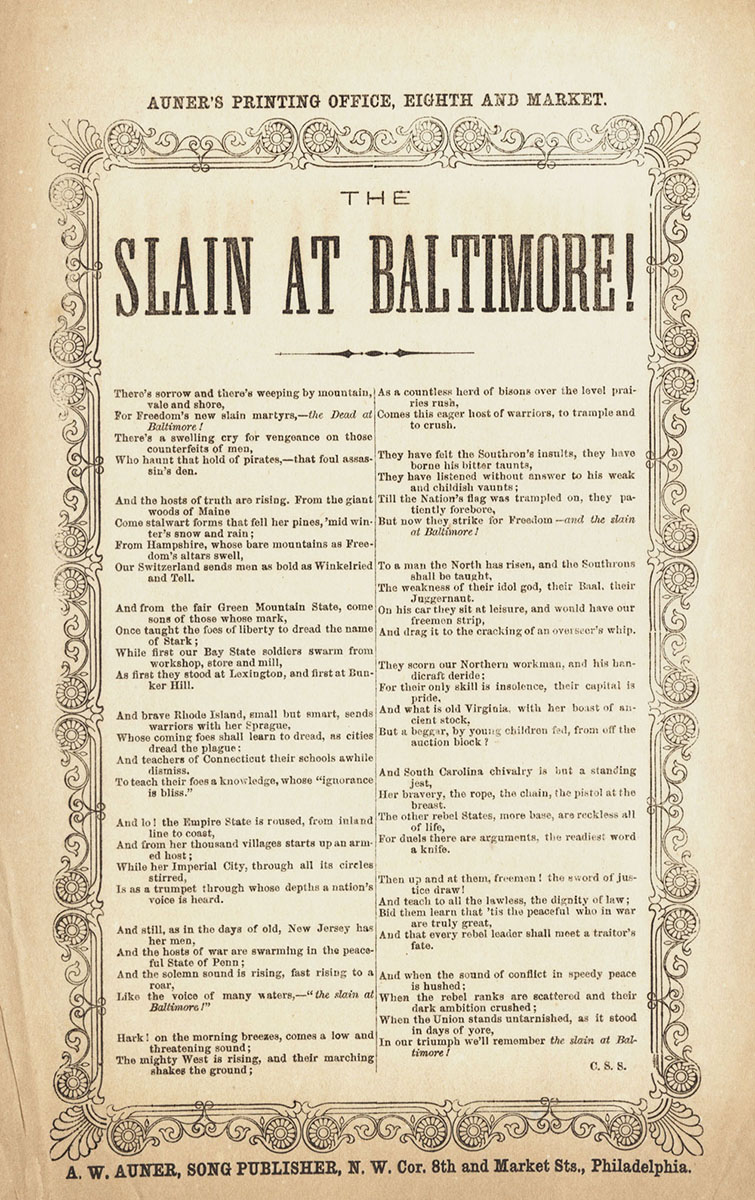