Slavery in a Border State

"The first day of Freedom in Maryland"

President Lincoln delivered a preliminary Emancipation Proclamation after the Union victory at the battle of Antietam in September 1862 and later made the proclamation official on January 1, 1863. The Emancipation Proclamation only applied to areas still in rebellion and did not affect slave states such as Maryland that had not withdrawn from the Union. In order to be legally free in Maryland, enslaved African Americans had to wait until Maryland's 1864 state constitution was ratified. The October 1864 ratification vote proved greatly controversial. The soldiers' vote, which included only those soldiers from Maryland serving in the Union Army, just tipped the scale so that this new state constitution could be ratified.

Since enslaved women and men were often illiterate, they did not often write letters or diaries. There are consequently a limited number of such first-hand manuscript sources documenting enslaved individuals' perspectives of and roles in the war and their feelings about emancipation. Oral histories with former slaves have been one way that historians have tried to understand slave perspectives, but the usefulness of these interviews is somewhat uncertain because they were usually recorded long after the fact.

Researchers frequently turn to other sources to try to gain insight into slavery and the lives of enslaved individuals. Published sources, such as William Still's The Underground Railroad(1872), provide second-hand accounts of Maryland slaves, including some very resourceful women, who escaped to freedom. Manuscript sources created by slave owners and witnesses to the "peculiar institution" of slavery can also assist in filling this gap in the historical record, but must be read with caution. Slave owners often kept careful track of their holdings, listing out the first name, age, and value of each slave. Enslaved women were normally considered less valuable than their male counterparts. White observers of slavery sometimes had mixed emotions about the treatment of slaves. Although the motivations of such witnesses must be carefully examined, such observations can be very helpful in learning about enslaved lives that may not be recorded anywhere else in history. Special Collections has numerous examples of original historical documents relating to the history of slavery in Maryland. 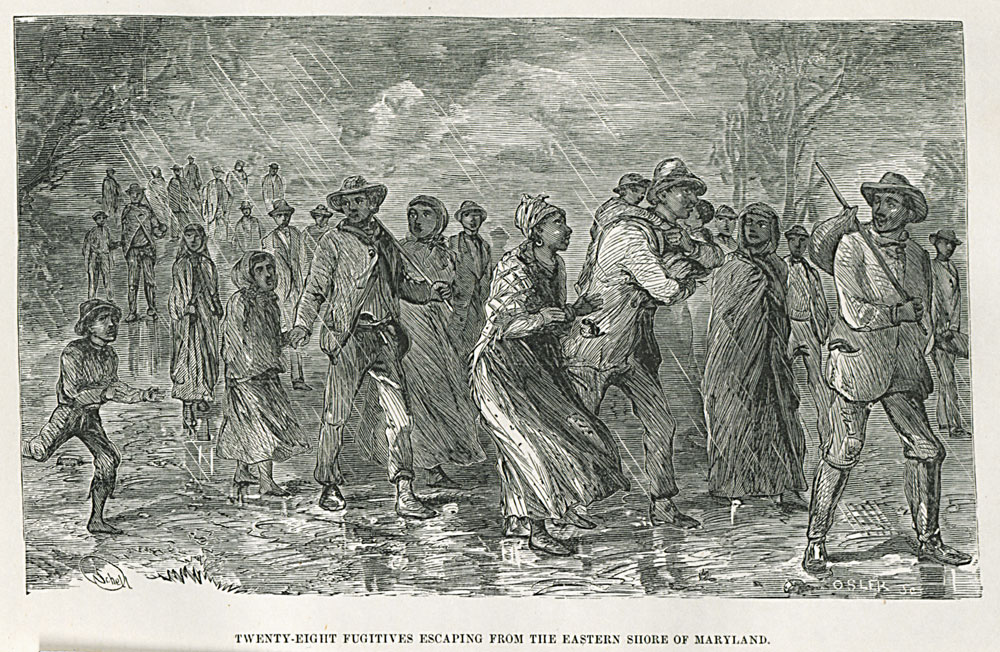 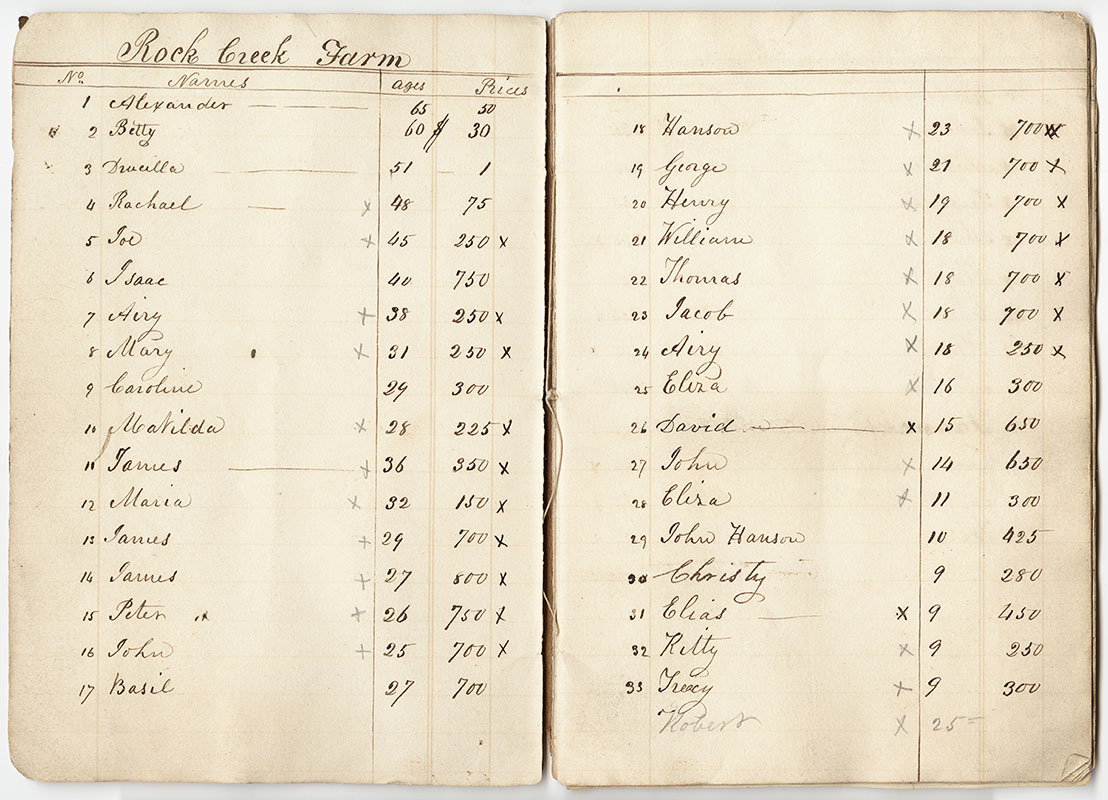 Account book of Charles Benedict Calvert, the founder of the University of Maryland, College Park. Calvert kept careful lists of the names and values of slaves at his various land holdings, including the names of female slaves. 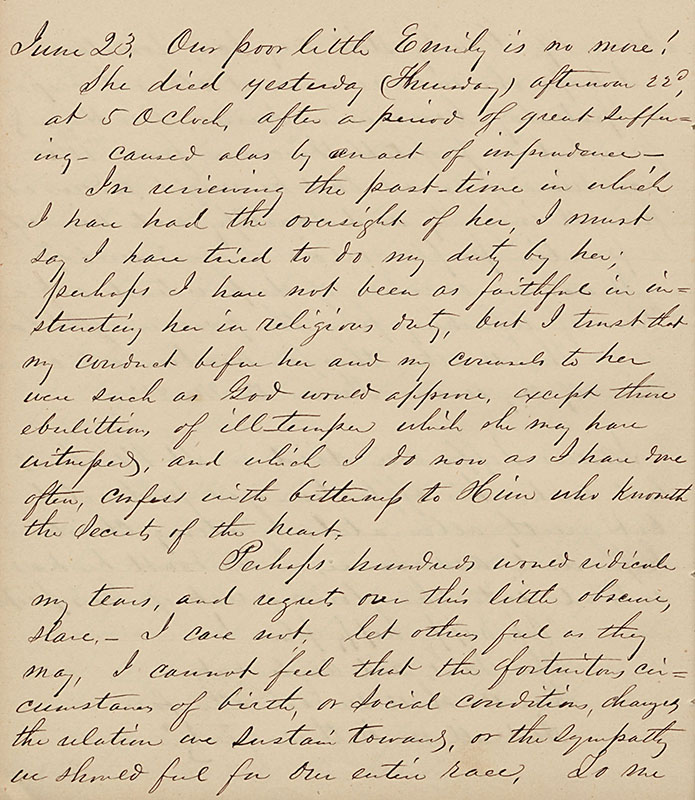 Leonidas Dodson was a prominent citizen of Easton, Maryland, during the nineteenth century. His journals span almost half a century (1842-1889) and are a rich source of information about local and national events, including the topics of slavery and the Civil War. Leonidas Dodson wrote a diary entry on June 23, 1854, describing his grief over the death of a slave girl named Emily who had lived with his family.

Tracing African American genealogical information in the mid-nineteenth century can be challenging, but not impossible. There are numerous resources available to genealogists and historians, including the 1860 U.S. Federal census and slave schedules. The census lists free black men and women by last name, while the slave schedules are organized by the last names of slave owners and then usually only the age and gender of enslaved individuals. In addition, local newspapers, court documents, manumission records, and other archival public documents can shed light on African American heritage. The Maryland State Archives website, "The Study of the Legacy of Slavery in Maryland", is an excellent resource for researching African American ancestors in Maryland. In addtion, the Freedman's Bureau records at the National Archives is an extremely important source for "investigating the African American experience in the post-Civil War and Reconstruction eras. 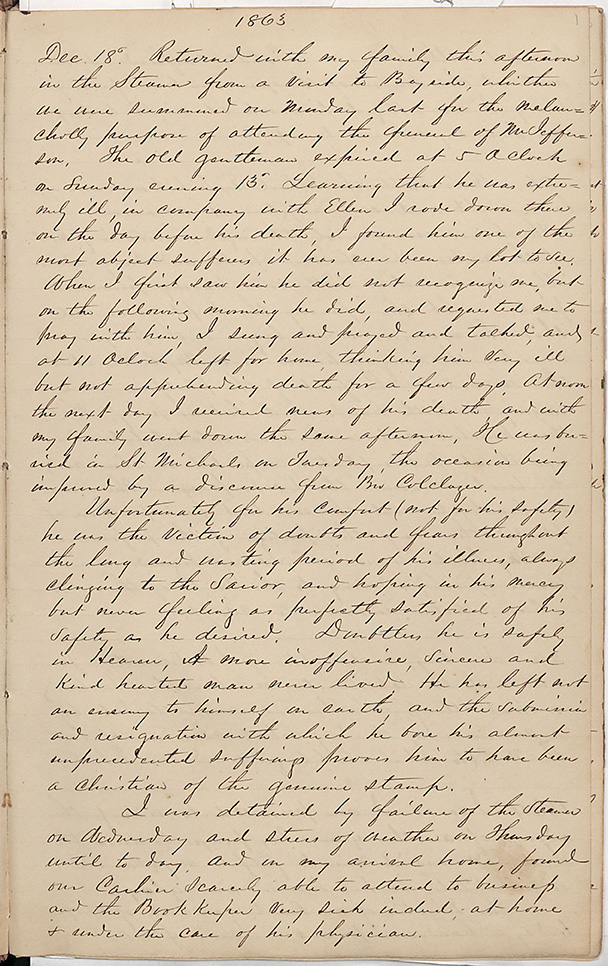 In his November 1, 1864, diary entry, Leonidas Dodson writes of his thoughts about the new Maryland state constitution that abolished slavery and the "First day of Freedom in Maryland."

On the eve of the Civil War, the state of Maryland continued to have numerous laws in place that contributed to the oppression of African Americans, both slave and free. Of all the slave states, Maryland had the largest free black population from 1810 to 1860. The state legislature and the inhabitants of Maryland debated the issue of slavery amid growing concerns about the burgeoning free black population. Enslaved individuals could more easily escape to freedom due to Maryland's shared border with Pennsylvania, an abolitionist state, and could disappear amongst the large numbers of free blacks in Maryland. Even in Maryland's western counties, where slavery was less prevalent, slavery and intolerance still persisted as the nation readied itself for war.

In September 1860, Mary Richardson, a free black woman who lived in Frederick County, Maryland, was accused of assisting a slave named Jackson Nickles (Nicholls) to run away from his owner, William Eader. Eader, who owned a large farm outside of the Frederick city limits, and another farmer offered a $400 reward for Nickles (Nicholls) and another slave who ran away with him. Mary Richardson appeared before the Frederick County Circuit Court during the October 1860 term. Four court documents relating the details of Richardson's case have survived to the present day.

Richardson had much to lose if she were found guilty of assisting a runaway slave. At the time, free blacks accused of aiding slaves could be jailed and sold into slavery, usually outside the state of Maryland. Her court case is signigficant because, as the documents indicate, she argued that she was a "free woman" and not a "free negro" or "free negress." The final document shows that Richardson was successful in her plea and was released on the information that "her mother was a white woman."

The strategic interplay of race and gender in this case are worth noting. Richardson used her knowledge of existing race and gender relations in order to make her case. She knew that if the court would believe her mother were white, she might gain the sympathy of the all white, male court, regardless of whether or not she had actually committed the supposed crime. Richardson, and her lawyers, likely understood that the more she could link herself to the white ideal of womanhood, the more she would be seen as a "free woman." 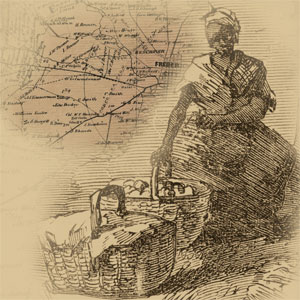 The four Frederick County circuit court documents relate to Mary Richardson's criminal case, which took place between October and December 1860. The documents reveal that Richardson made a plea to the court to forgive her alledged crime based on her status as the daughter of a white woman. Mary Richardson's whereabouts and life experiences after the trial and during the impending Civil War are not known. 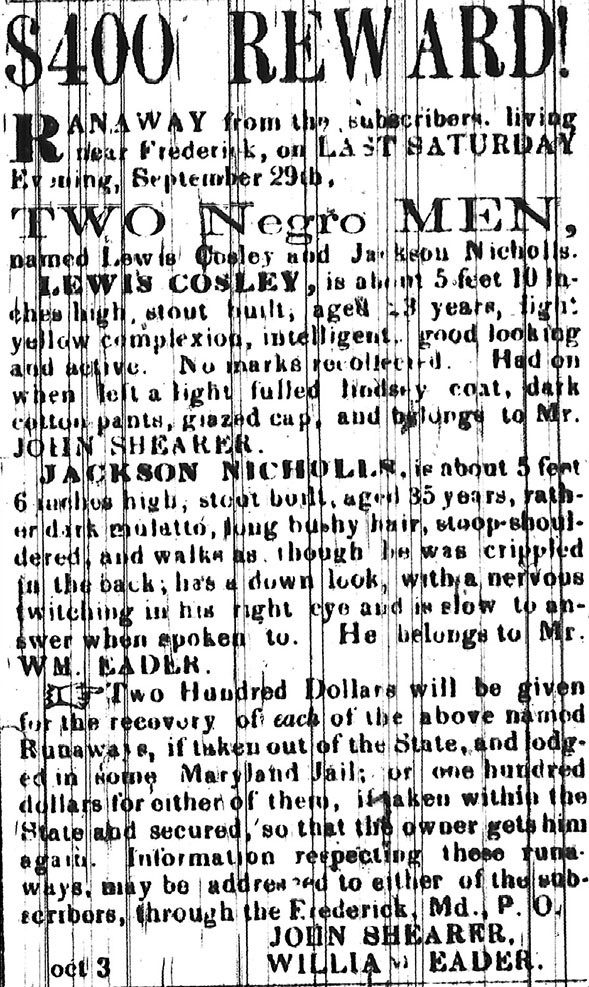 Reward advertisement for the return of Jackson Nickles (Nicholls) from the October 24, 1860 issue of the Frederick Examiner. 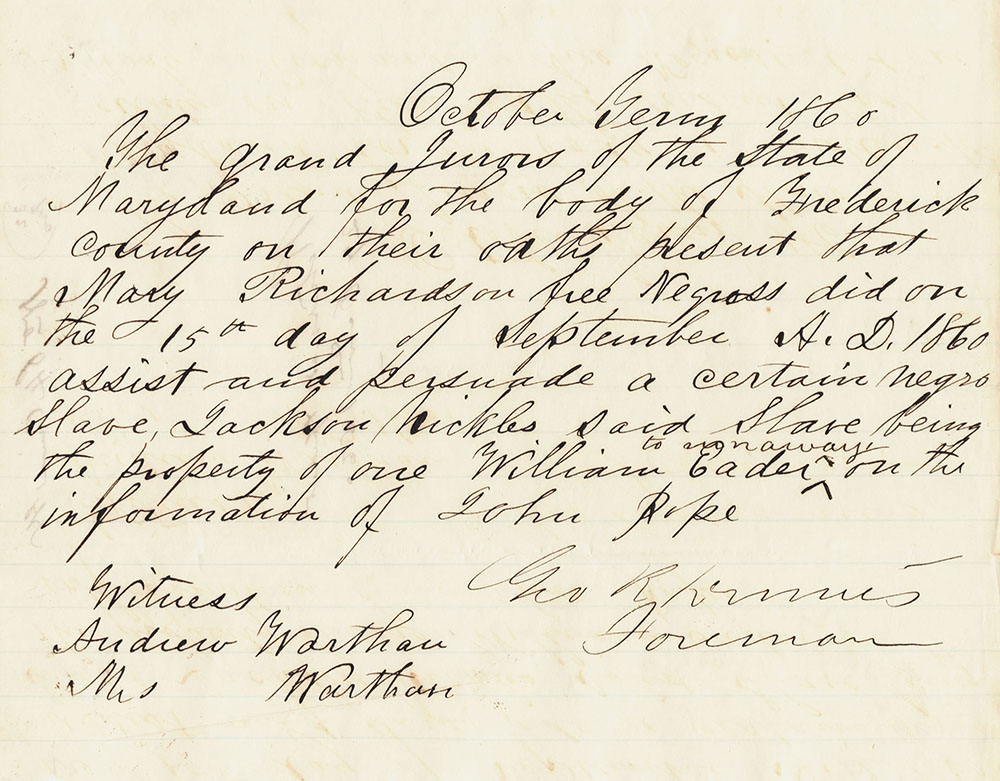 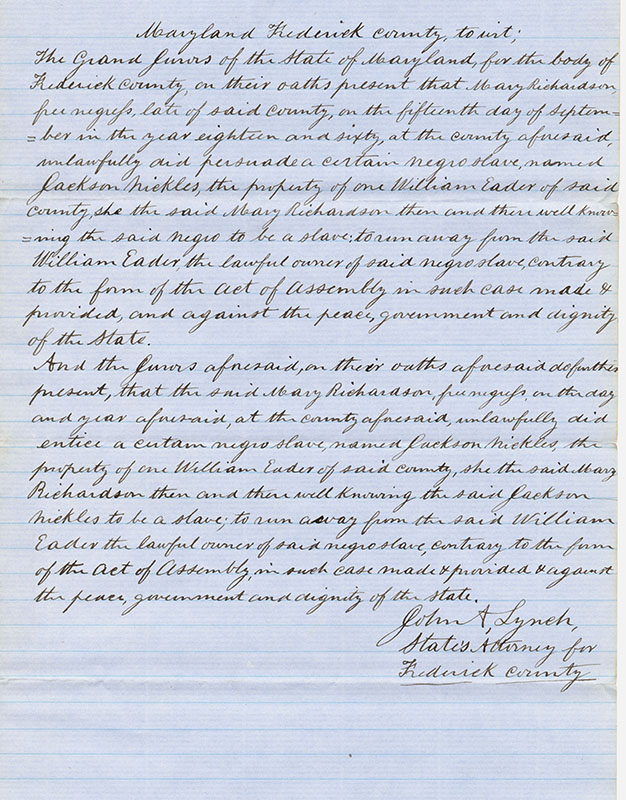 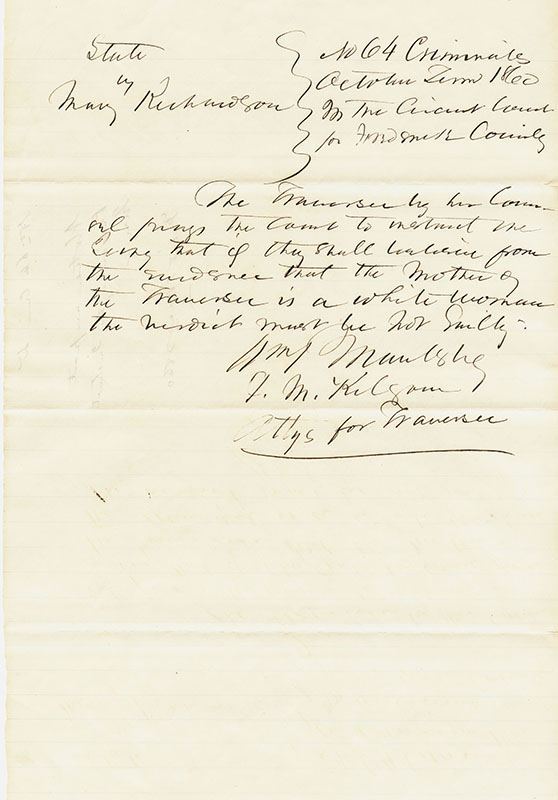 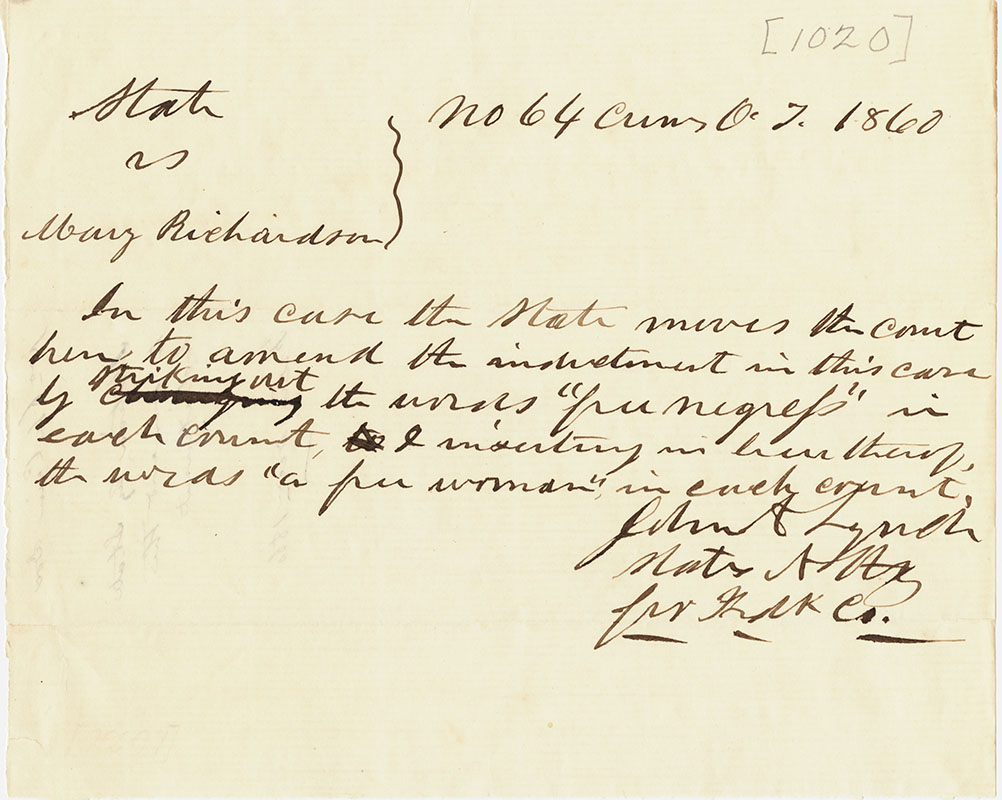 Mary Richardson almost certainly did not know how to read or write, but there is still a record of her life to be found in the archives. She did not create these documents that record an important event in her life, so taking perspective into account when examining these historical documents is important. What terminology would Mary Richardson have used to describe herself and her situation if she were writing about her own experiences in the courtroom?