Letters Home from the Battlefront

James F. Steptoe (Stepter) enlisted in Company B of the 6th Maryland Volunteer Infantry on August 14, 1862, and served as a private in the Union Army. During the war, Steptoe wrote many letters to his siblings and family, the majority to his wife, Amanda. Shortly after Steptoe's enlistment, Amanda took their children, William, Lewis, and Emma, and left their home in Elkton, Maryland, to live with her brother and mother in Chester, Pennsylvania, thirty miles from the northeast corner of Maryland.

Steptoe frequently wrote to his wife about how he longed to return home to his family. Initially, he spoke strongly about his support of the Union, his stance as an abolitionist, and his duty to quell the rebellion in the South. As his enthusiasm for the war waned, his desire to return to his loved ones increased. Steptoe's letters recount both the joys and frustrations of his time in the Union Army. They are deeply personal, and serve to illustrate the importance family ties played in the day-to-day lives of Civil War soldiers. Despite his prolonged time away from his family, it is clear from both his words and the frequency with which he wrote that his greatest source of strength was the support he received from home.

As war-weariness began to take its toll, Steptoe's letters home illustrate that his firmest commitment was to his family, rather than his country or his regiment. Steptoe took an unauthorized or "French" leave to visit his wife briefly in March 1863, and he later threatened to abandon his duties as a soldier entirely in the hopes of being permanently reunited with his wife and children. Wounded and then captured at the Battle of the Wilderness in Virginia in May 1864, Steptoe was sent to Andersonville Prison in Georgia, then to a prison hospital in Charleston, South Carolina, where he died in October 1864, never to see his wife or his children again. 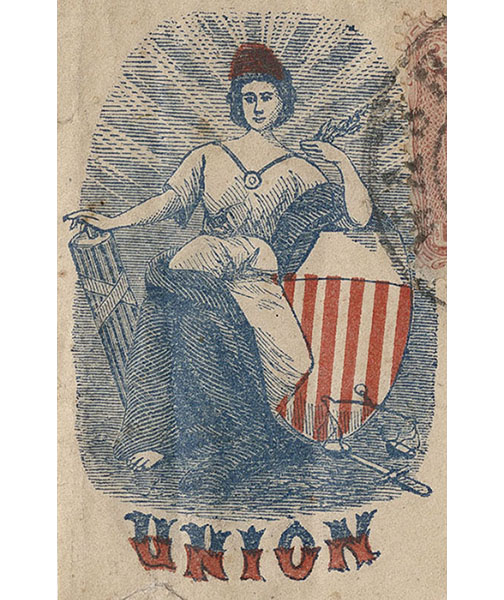 Detail from a letter from John J. Hostetler to his parents, September 5, 1862.

"i recived your kind and Welcom letter to Day and i was Glad to hear that you and the children are so well it makes me almost cry when i read about the children and cant get to see them But I am thakful that thay and you are all so well i have Ben very uneasy about the money that i sent you your letter was a good while on the road i was going to rite tonight if i had not got the letter to know if you had got the money But your letter rleved me a good bit i can tell you you say that you woud like to go Down in Marryland with your mother when she goes i think it will Be a good plan for i woud like to know how our tings are getting along.."

"..i know that it has Been very hard on you i woud like to have got home But coud not get thare But I Doo expect to get home.. keep in good heart i will get home Some time this winter and i think that i will faten you up when i Doo come if you look like the picture that you Sent me you have got very thin indeed you Dont look like you Did when i was at home the last time and i am afraid that you greve too much about me i will have to make you Something when i get home to take your mind of[f] me you know that i can Doo it if i try i am very glad that you Sent me your picture and i am going to Sleep with it to night But i woud rather Be at home sleeping with you."

"i want you to take care of your Self and the children and i Don't want you to wory your Self about me for i think that providence will protect me and Bring me out Safe and i will rite to you every chance that i get and i will take the Best care of my Self and hoping that you will Doo the Same...."

"i woud give anything to See you tonight i am always glad to hear from you in a letter But it makes me Sad when i have to rite to you it Seams i ought to be at home with you in Stead of writing But the time of my Service to uncle Samuel is getting Shorter and i will Be free again and i think that i will Stay free.." 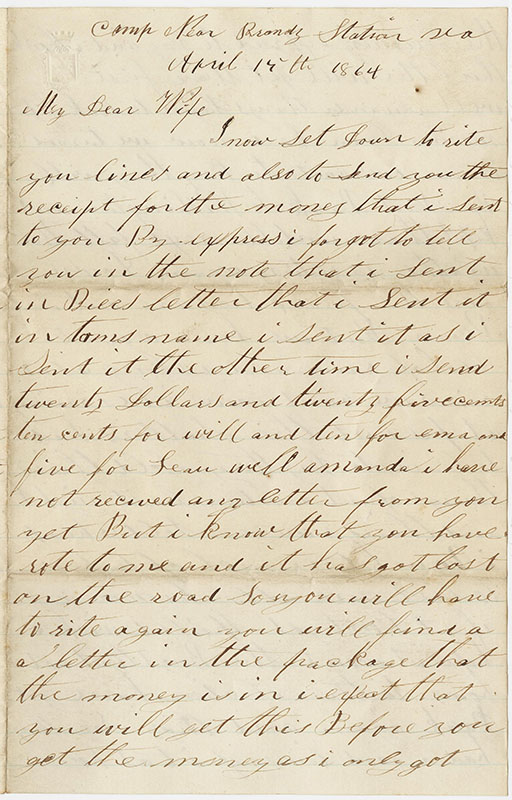 James Steptoe's last letter to his wife Amanda, dated April 19, 1864. The "Full details" button links to the entire folder of Steptoe's 1864 Correspondence. The April 19, 1864 letter can be found on pages 20-23 in the digital document viewer.

Many letters to wives, mothers, sisters, and daughters from soldiers on the Civil War battlefront are preserved for the historical record, while women's letters to soldiers are more challenging to find because they were often lost in the movement of troops and the fury of battle. None of Amanda Steptoe's letters to James remain in existence as far as is known. However, a few of Amanda Steptoe's letters to other family members on the home front survived the war and are preserved for study by historians and other.