Images from the Civil War time period are scarce compared to today's standards. Most images in magazines, newspapers, and books were artists' illustrations and were printed using processes such as engraving or lithography. Photography was still a newly developing field at the time of the war and changed dramatically as the war progressed. Photographers such as Matthew Brady documented devastating battlefield scenes as well as famous individuals of the time.

Individual photographic portraits became immensely popular in the United States during the Civil War. Photographers first produced portraits as daguerreotypes and then as ambrotypes, extremely fragile formats. Ambrotypes (as well as daguerrotypes) came in a hinged case, which was often elaborately decorated, and the photographic emulsion was coated onto a small piece of glass. These portraits were expensive and were not widely owned. 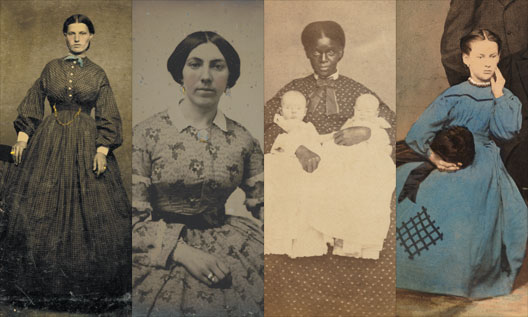 The carte de visite, a new photographic format invented in the 1850s and popularized in the 1860s, gave Civil War soldiers, their families, and friends a portable and inexpensive way to remember loved ones during the long separations caused by the war. Cartes de visite are miniature portraits made from albumen prints, a paper-based negative process, and then affixed to paper calling cards roughly 2.5 x 4 inches in size. Sometimes tintypes, coated on tin instead of glass, were used and then attached to paper calling cards. The advantages of the carte de visite were numerous. Multiple copies of the same image could be produced quickly and efficiently, a distinct improvement over previous formats. Soldiers could tuck the small cards in their pockets without fear of breakage. Women and those at home assembled albums of family photographs, and collectors sought out images of well-known personages of the day.

Photographic portraits of women during the time period document dress, hairstyles, and economic status. The wealthiest women typically wore the full hoop skirt, expensive fabrics, elaborate sleeves, and fancy jackets. Middle-class women were more likely to make their own clothing and to use and re-use simpler fabrics and styles. Servant women wore much plainer clothing. A popular style for servants of the period included a full bishop-sleeved housedress, made of spotted dark chintz, with a white linen collar. The hardship of war made it difficult for some women to obtain clothing and accessories, especially women in the Confederate states. 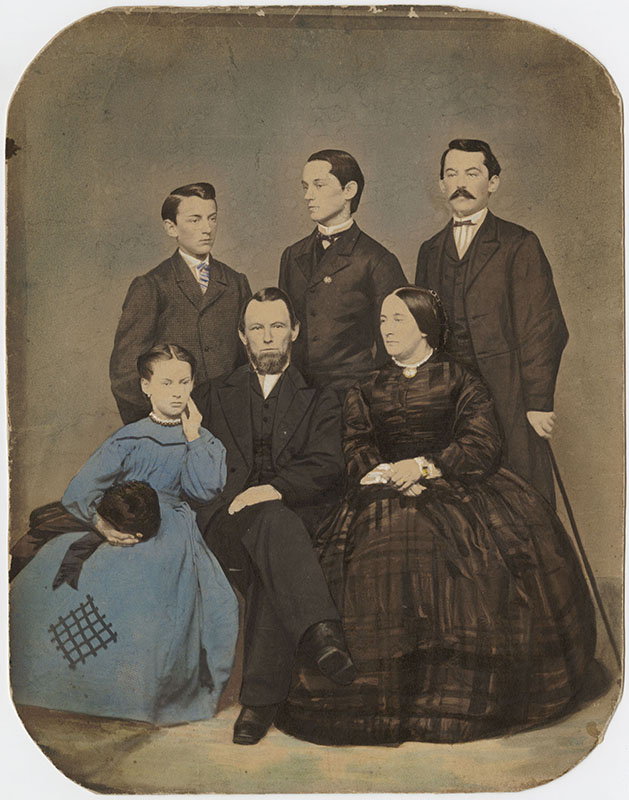 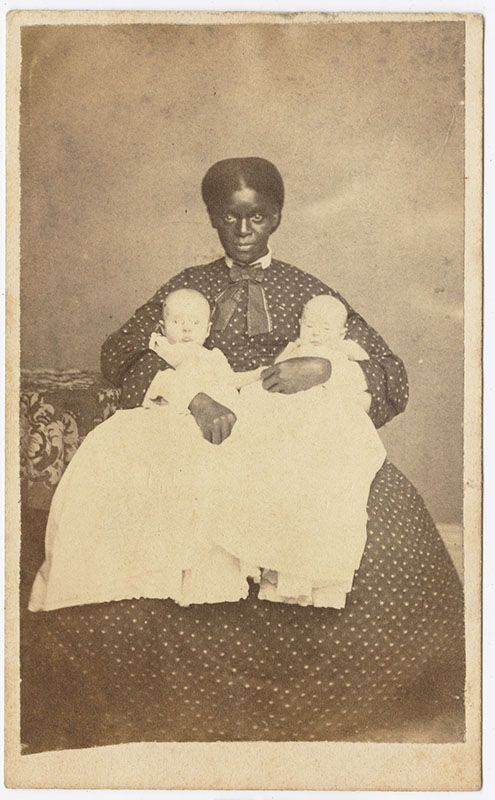 Carte de visite of "Nancy" and two children, circa 1860s

"Nancy," possibly a servant or a slave, is pictured holding two infant children, circa 1860s. 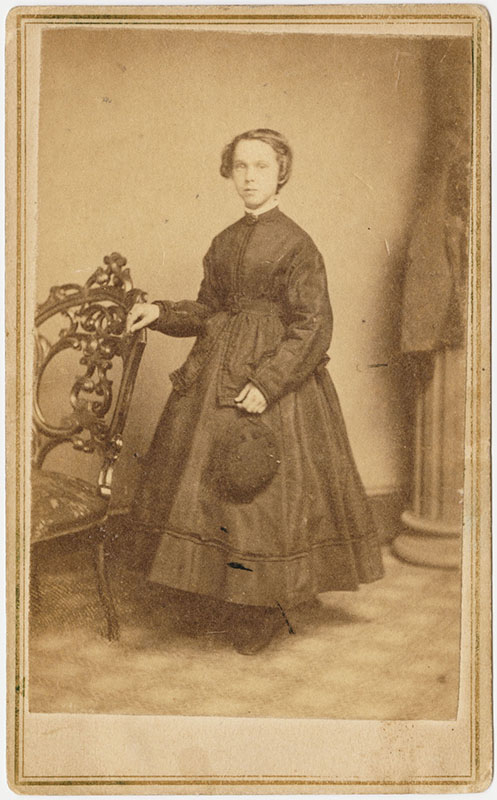 Carte de visite of an unidentified young woman, circa 1860. 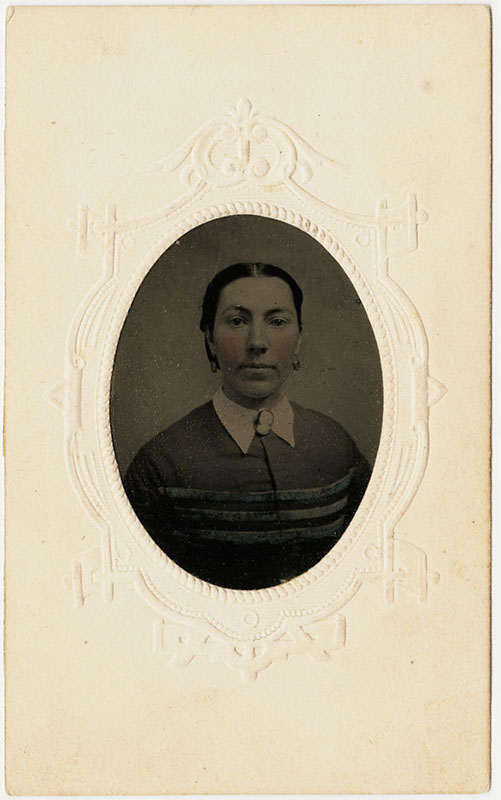 Portrait of an unidentified woman, circa 1860s 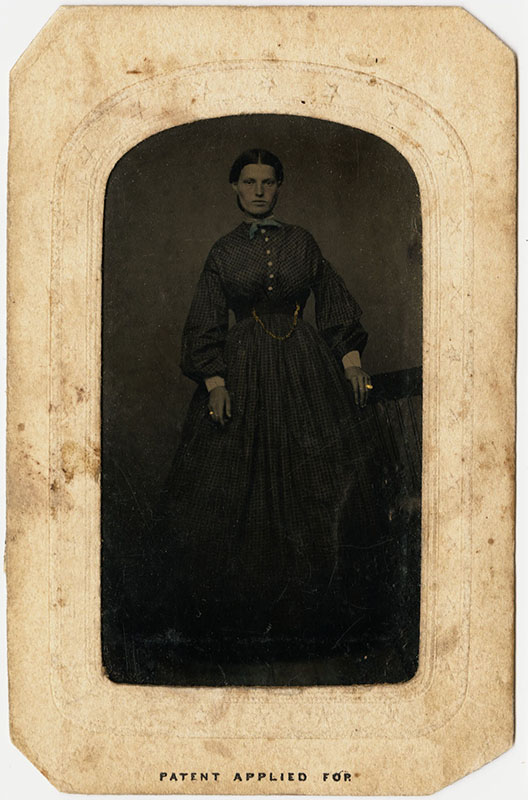 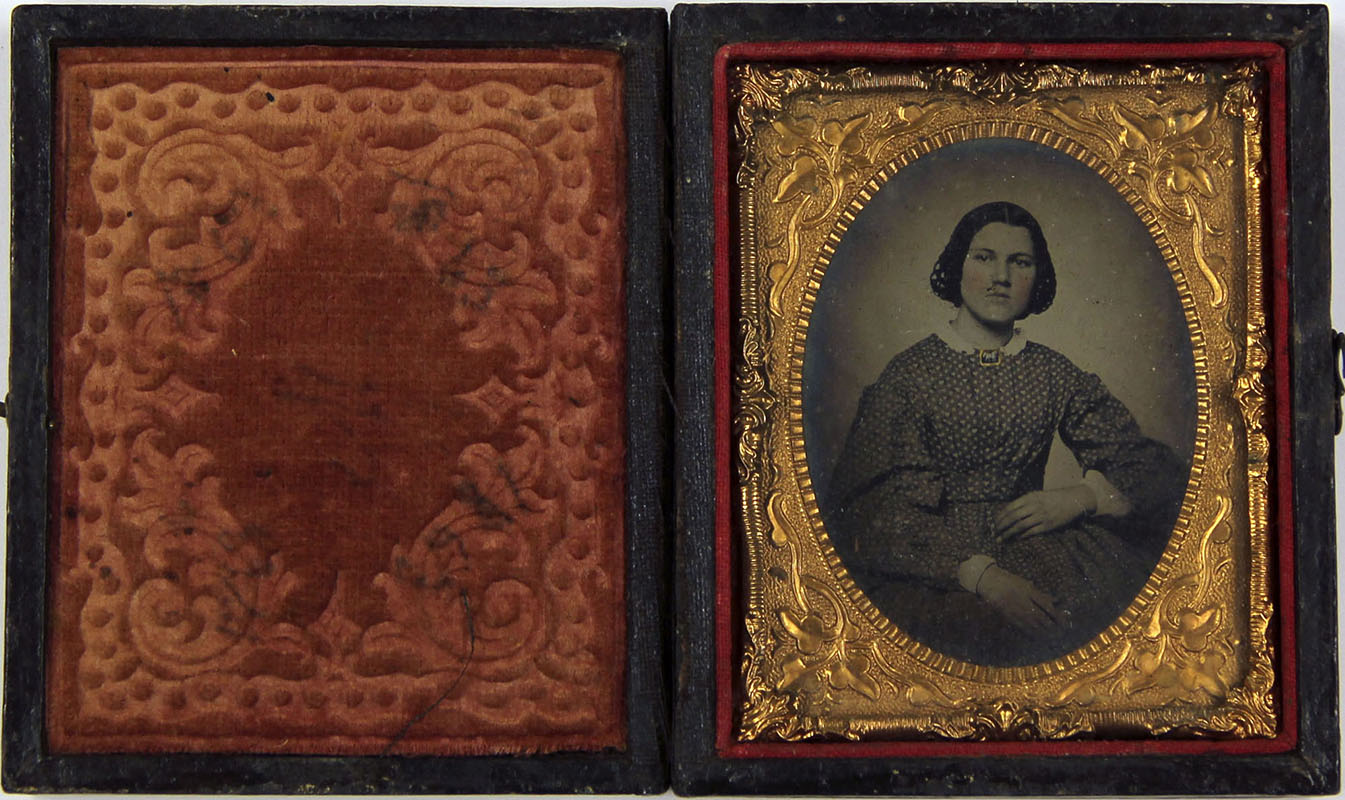 Cased tintype of an unidentified woman, circa 1860s 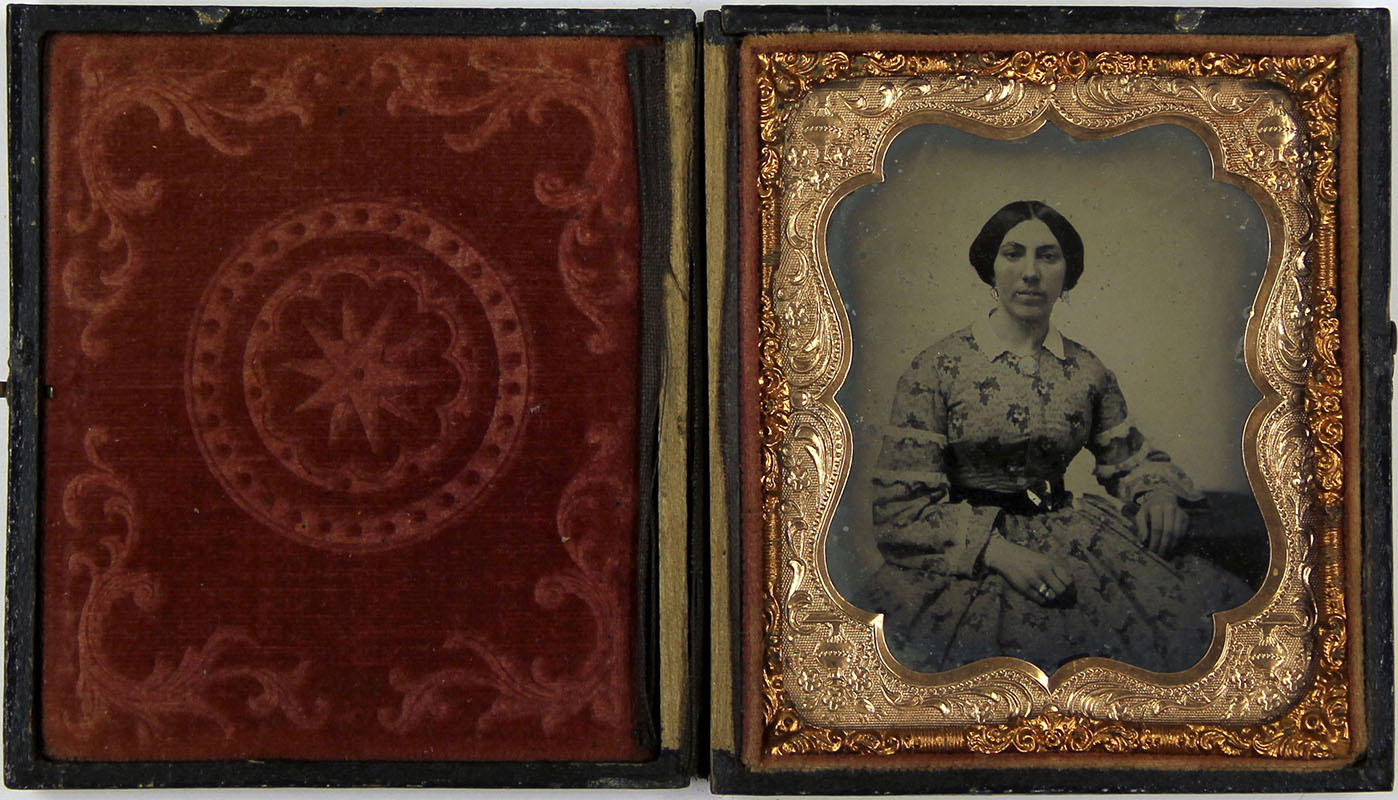 Ambrotype of an unidentified woman, circa 1860s 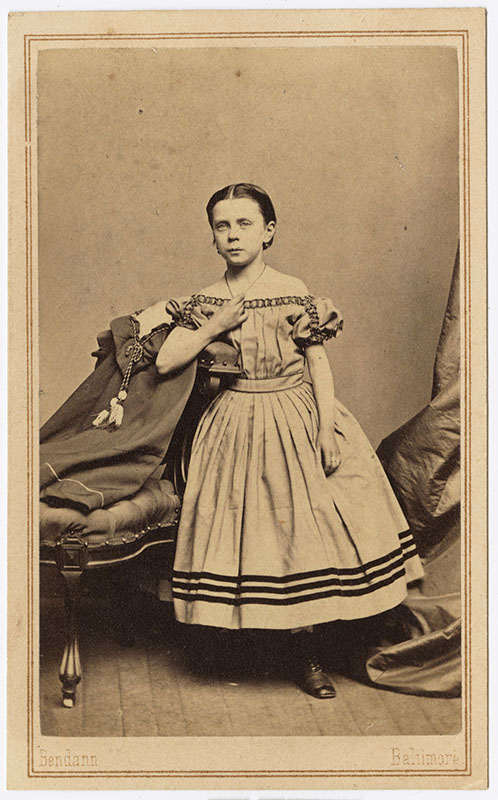 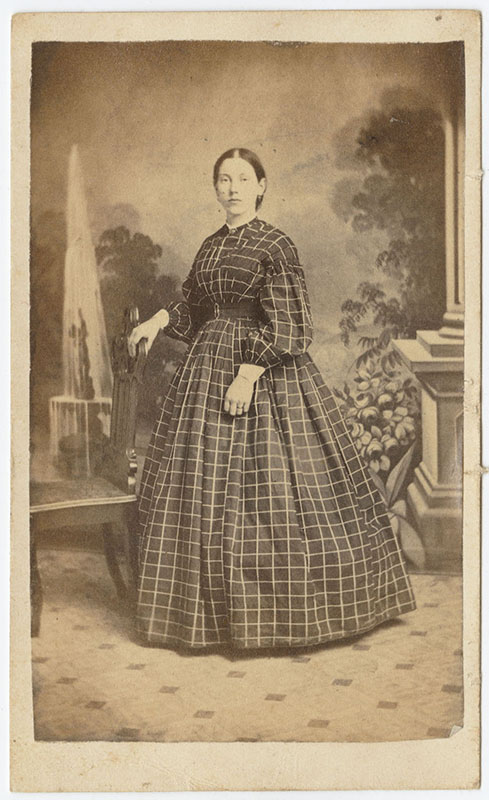 Carte de visite of an unidentified woman, circa 1860s 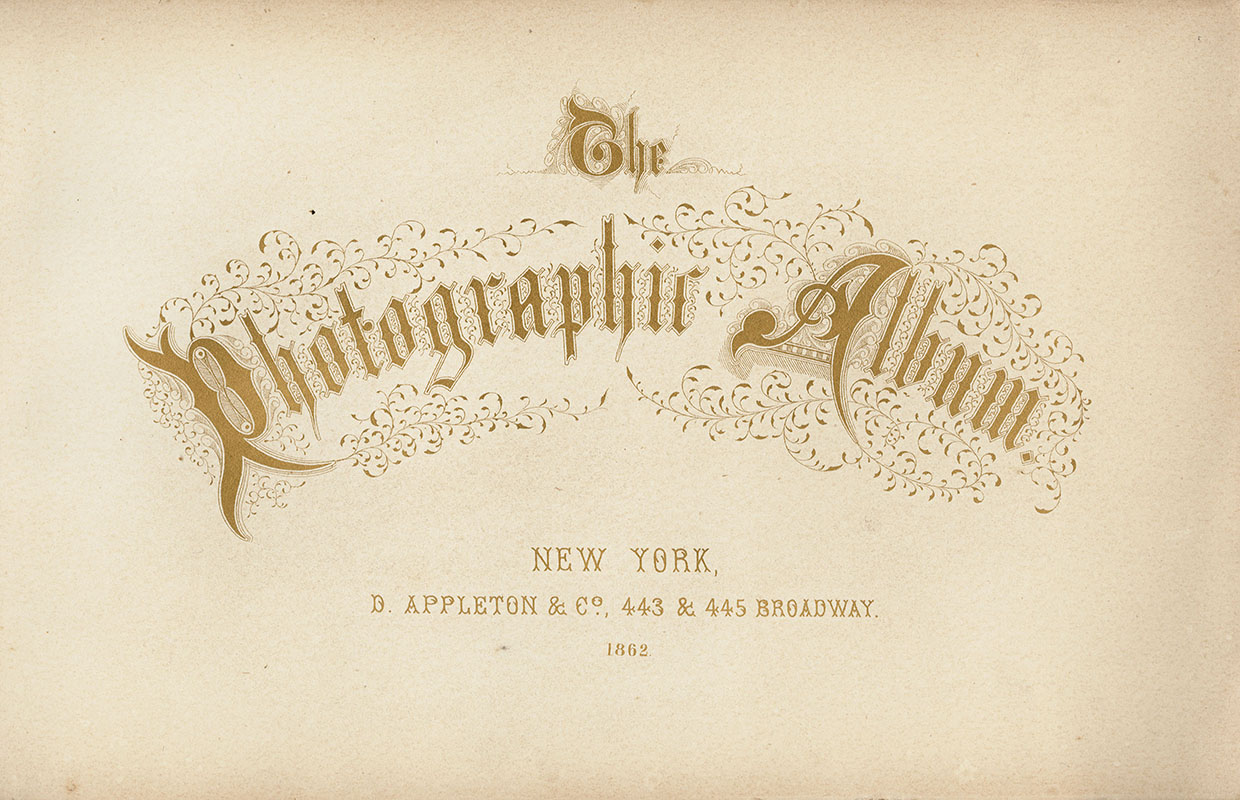 This photograph album was created by D. Appleton & Company of New York in 1862, but it is unknown who assembled the images within the album. Many of the images in the album are undated, but they span much of the nineteenth century. The album contains images and photographs, usually cartes de visite, of Humrichouse family members from Maryland, including members of the Hawken, Boyd, Boteler, Levy, Hammond, and McComas families. In addition, there are cartes de visite of Robert E. Lee (page 49 in the document viewer) and Stonewall Jackson (page 32) Some of the individual photographs pictured above are from this album.

Civil War-era photographs are somewhat rare and highly collectable. Such photographs are often donated to archives or manuscript repositories through personal and family papers collections. "Family papers" may span generations of a particular family or may pertain only to an immediate family group. Papers that are predominantly associated with a single individual are often described as "personal papers," even if they contain some materials from other family members. Photographs found in personal and family papers collections often lack identifying information. Unidentified and undated photographs pose challenges for manuscript curators as well as researchers who wish to use them as primary sources.