Sketches of Women at Point Lookout

"The Rebels Dream in Prison"

Like many Civil War soldiers, John Jacob Omenhausser, an amateur artist and candy maker residing in Richmond, Virginia, had no thoughts of a military career before the outbreak of the war. However, when war came, he enlisted in April 1861 and served in the 46th CSA Virginia Infantry. In June 1864, he was captured near Petersburg, Virginia, and sent to the large Federal prisoner-of-war camp at Point Lookout in southern Maryland. There he endured harsh conditions - limited food supplies, little access to medicine or clothing, and deficient sanitary conditions. However, he had the means to acquire stationery, brushes, and inks for creating illustrations of camp life. It is likely that Omenhausser created these sketches, often with humorous captions, to be sold to or bartered with his fellow prisoners and possibly Union guards and officers.

Originally established as a Federal hospital, Point Lookout became a large prisoner-of-war camp for captured Confederates shortly after the Battle of Gettysburg in July 1863. The number of prisoners at one point exceeded 20,000, with attendant deteriorating conditions. Confederate General Jubal A. Early attempted to capture the camp as part of his raid on Washington during the summer of 1864. Although nurses worked at the camp hospital, wives lived with the higher-ranking Union officers, and the camp welcomed the occasional female visitor, women at the prison camp were scarce. Boredom, deprivation, and longing for home and the company of women no doubt contributed to the fantasy depicted in Omenhausser's sketch "The Rebels Dream in Prison." Omenhausser's artistic work remarkably captures prison life during the Civil War, including an idealized view of women and their role in society. As the war raged on, the plantation economy of the South that had perpetuated this romantic view of women began to crumble. After the war, both women and men began to re-examine their roles in a re-united nation.

Point Lookout is at the lowest tip of southern Maryland, looking towards the Potomac River to the west and the Chesapeake Bay to the east. 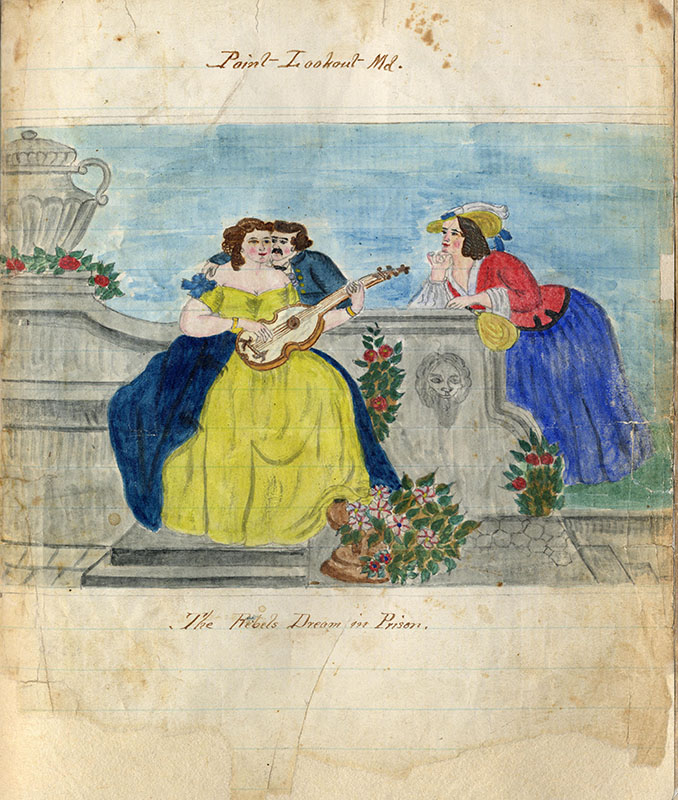 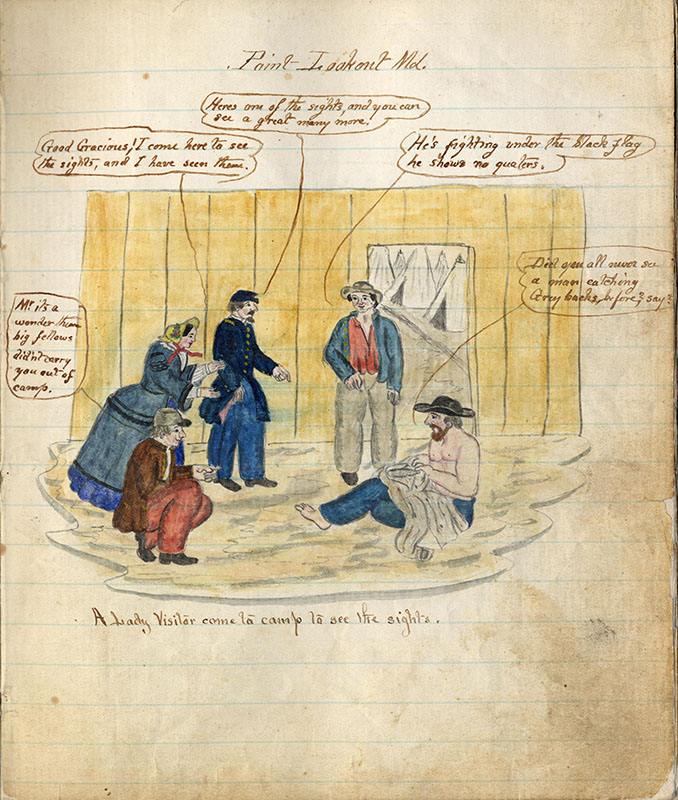 Captive Confederates as well as Confederates on the march in campaigns in Maryland, attracted the attention of curious civilians who often viewed them as filthy, malnourished objects of pity. A visiting lady is appalled at a view of a prisoner picking lice from his shirt. Maryland Manuscripts Collection, Special Collections, University of Maryland Libraries. - page 13 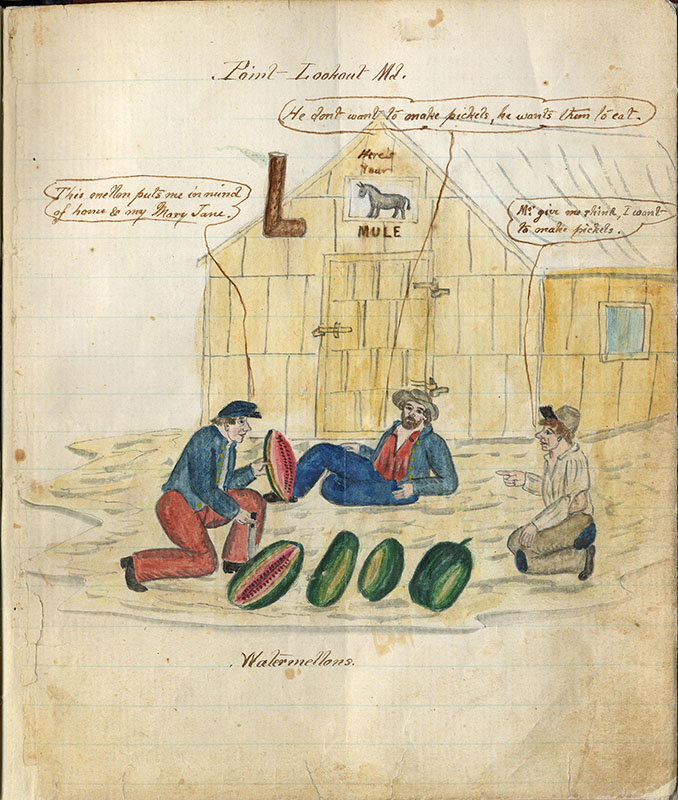 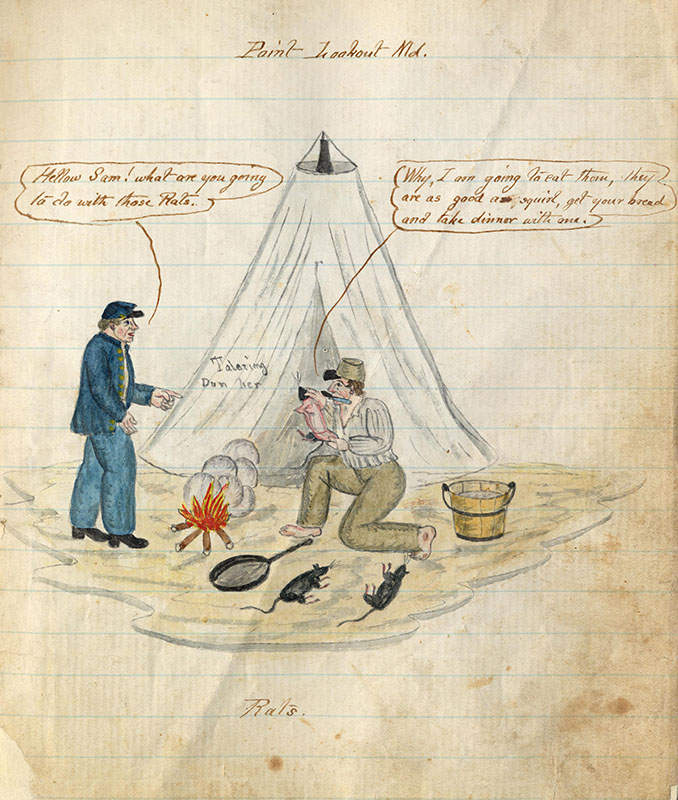 "Rats," circa 1864
Prisoners were allowed to fish and hunt for crabs and oysters, and the motivation to improvise further to supplement their meager rations was always uppermost in their minds. Any obtainable rodent or bird was fair game in this grim environment. Maryland Manuscripts Collection, Special Collections, University of Maryland Libraries. - page 17

Provenance, or information regarding the origins, custody, and ownership of a manuscript or a collection, is an important concept in the archives field and is also of interest to historians. Guides or "finding aids" to archival collections always note a collection's provenance, if known, so that researchers can evaluate authenticity and the importance of a source. The Omenhausser sketchbook was acquired by the university from a Massachusetts book dealer in 1989. It is believed that the sketchbook was originally in the possession of a North Carolina drummer boy and was later sold to an individual who moved to the Boston area. Only four other Omenhausser sketchbooks have been identified. The other four are in the possession of the Maryland Historical Society, the Maryland State Park Foundation, the New-York Historical Society, and Allegheny College Library in Meadville, Pennsylvania.