Prior to the American Revolution, voting rights varied greatly across the colonies. Local laws defined the timing and location of elections, the mechanisms of voting, and who was eligible to vote. Suffrage was generally limited to those who were free, white, male, and property owners. Elections were often social gatherings, where voter fraud and corruption were commonplace, and votes were cast by standing up or voice voting; paper ballots were introduced later.

As leaders began outlining a new democratic system of government in early America, voting regulations were left out of the founding national documents. As a result, each state's governing bodies created their own laws to dictate electoral qualifications and conditions, writing them into state constitutions. While voting qualifications varied from state to state, enfranchised groups continued to include wealthy, landowning men and exclude others on the basis of race, gender, socioeconomic status, and religion.

The absence of federal electoral laws set the stage for many national and local debates over the next 250 years. 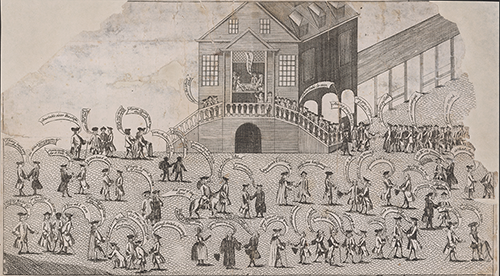 “The Election, A Medley, Humbly Inscribed to Squire Lilliput, Professor of Scurrility.”
By Henry Dawkins. Philadelphia: 1764. Library of Congress Prints and Photographs Division

A Relation of Maryland; Together, with a Map of the Countrey, the Conditions of Plantation, His Majesties Charter to the Lord Baltemore
London, 1635.
Rare Books collection 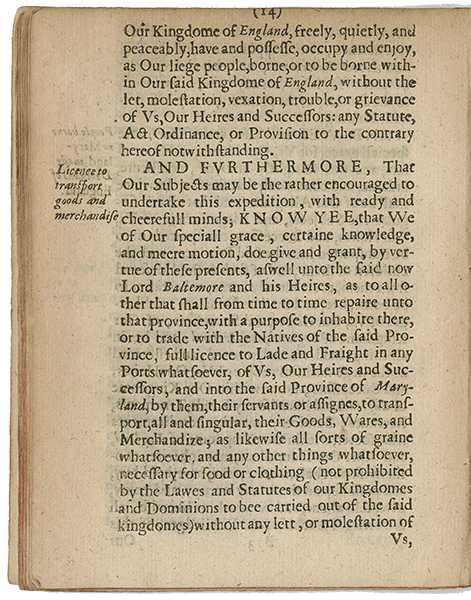 In section VII of the Charter of Maryland, Lord Baltimore is authority to enact laws "in agreement" with the freemen of the province, although mechanisms of obtaining consensus are not outlined and left entirely up to Lord Baltimore's discretion:

"Know Ye therefore further, that We, forges, our Heirs and Successors, do grant unto the said now Baron, (in whose Fidelity, Prudence, Justice, and provident Circumspection of Mind, We repose the greatest Confidence) and to his Heirs, for the good and happy Government of the said Province, free, full, and absolute Power, by the Tenor of these Presents, to Ordain, Make, and Enact Laws, of what Kind soever, according to their sound Discretions whether relating to the Public State of the said Province, or the private Utility of Individuals, of and with the Advice, Assent, and Approbation of the Free-Men of the same Province, or the greater Part of them, or of their Delegates or Deputies, whom We will shall be called together for the framing of Laws, when, and as often as Need shall require, by the aforesaid now Baron of Baltimore, and his Heirs, and in the Form which shall seem best to him or them."

A Compleat Collection of the Laws of Maryland
Annapolis, Printed by W. Parks, 1727.
Rare Books collection 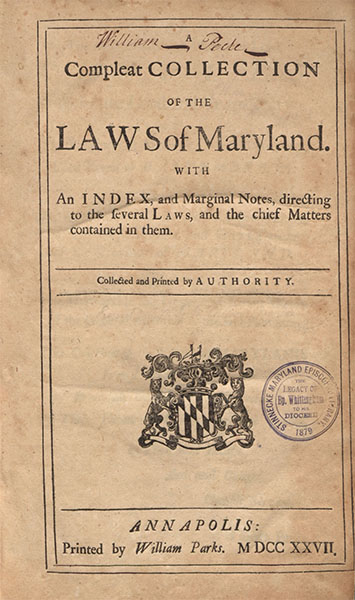 As stated under "An act directing the manner of electing and summoning delegates to serve in succeeding assemblies...":

"Foresomuch as the chiefest and only Foundation and Support of any Kingdom, State, or Common-wealth is the providing, establishing and enacting good and wholesome Laws, for the good Rule and Government thereof, and also upon any necessary or emergent Occasion, to raise and levy Money for defraying the charge of the said Government, and the defense thereof, neither of which, according to the Constitution of this Province, can be made, ordained, established or raised but by and with the Consent of the Free-Men of the Province, by their several Delegates and Representatives by them freely nominated, chosen and elected to serve their several Cities and Counties in a General Assembly."

Margaret Brent, born circa 1600 in Gloucestershire, England, was a prominent attorney, “founding mother” of Maryland, and the first female in the colonies to demand the right to vote in court. She first arrived in St. Marys City, Maryland with three of her siblings in 1638. She subsequently became involved in various business ventures and became the first woman landowner in Maryland.

She was renowned for her business savvy and knowledge of the law. In 1647, then-Governor of Maryland Leonard Calvert appointed her executor of his estate shortly before he died. As Calvert’s executor, she played an instrumental role in stabilizing Maryland at a time of political crisis for the colony.

In 1648, Brent argued before the provincial assembly for a voice in the council and two votes, one as Lord Baltimore’s representative and one as a landowner in her own right. As an unmarried, property-owning gentlewoman, Brent’s argument was consistent with English law, but she was ultimately denied the vote. After falling out of favor with the Calvert family, Brent moved to Virginia, where she died circa 1671.

In the proceedings of the 1776 convention, it was discussed in regards to suffrage:

"That all freemen above twenty-one years of age, being freeholders of not less than fifty acres of land, or having visible property in this colony to the value of 40 sterling at the least, and no others, be admitted to vote for representatives to serve in the said convention for the said counties and districts, and the town of Baltimore aforesaid..."

In 1851 Maryland Constitution, article 5 grants the right to suffrage to: "every free white male citizen..."

The Democrat’s Almanac and Political Register for 1859
New York: Published at the Office of the Evening Post.
Rare Books collection

The “Naturalization and the Right of Suffrage” section outlines the suffrage requirements by state, pages 21 through 24. In Maryland, suffrage was granted to

"every free male citizen, above twenty-one years of age, having resided in the State one year, and six months next preceding the election at which he offers to vote..." 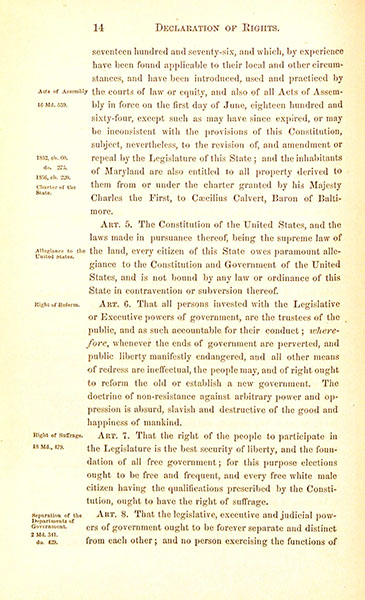 In 1864 Maryland Constitution, article 7 grants the right to suffrage to: "every white male citizen..." 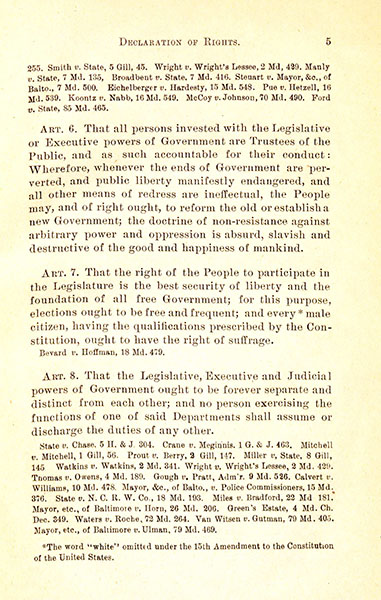 In 1898 Maryland Constitution, article 7 grants the right to suffrage to: "every male citizen...", with a footnote indicating that "white" was omitted following the passage of the 15th amendment. 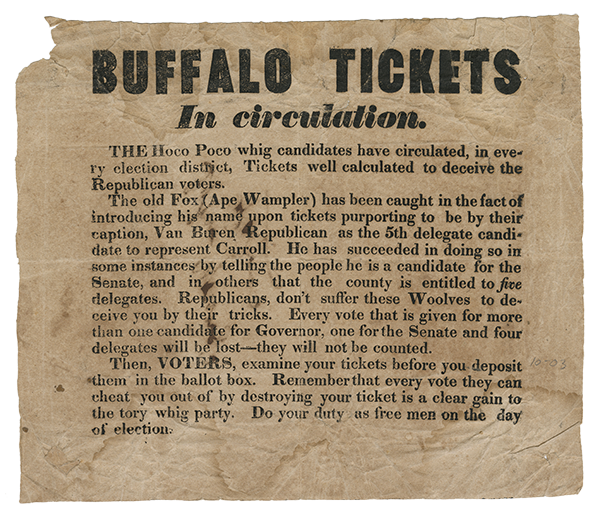 Early voting practices in America varied by state. Confusion, manipulation, and claims of fraud were commonplace. This broadside warns against fraudulent tickets being circulated in Maryland. Voters are encouraged to carefully examine their tickets before casting a ballot.

Voting in the 19th century was done by paper ballots, which were often printed and distributed by political parties and featuring party symbols for easy identification. 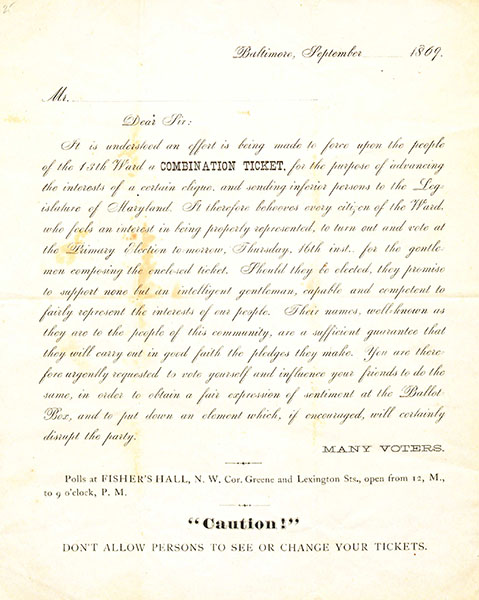 This letter warns voters of an attempt to "force upon the people of the 13th ward a combination ticket for the purpose of advancing the interests of a certain clique and sending inferior persons to the Legislature of Maryland." Voters are then encouraged to vote for the candidate whose ticket was enclosed with the letter.

Combination tickets were electoral collations of two or more political parties to list the same candidate for election to gain advantage in an election. It was often seen with the rise of third party groups, such the populist party in the United States, or the result of fractions with a political party. 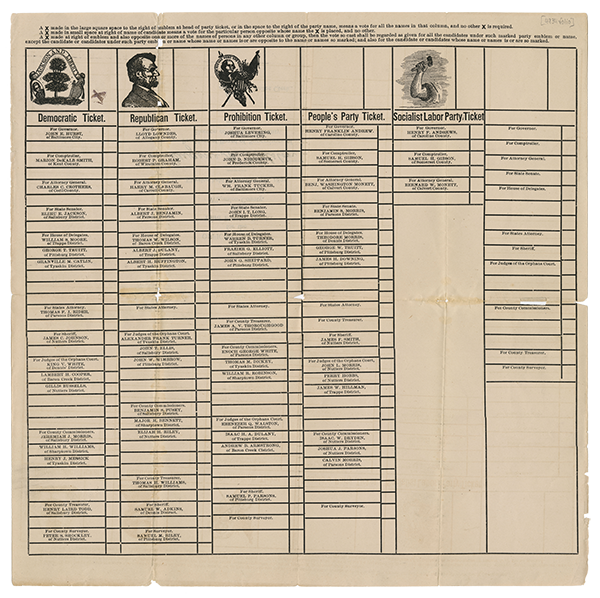 States began to move away from single party ballots/tickets, in favor of blanket ballots, which listed all candidates on the same ballot. Voters were instructed to mark their ballots with an "X" next to their chosen candidate. Political party symbols continued to help guide voters to candidates from the same political party. 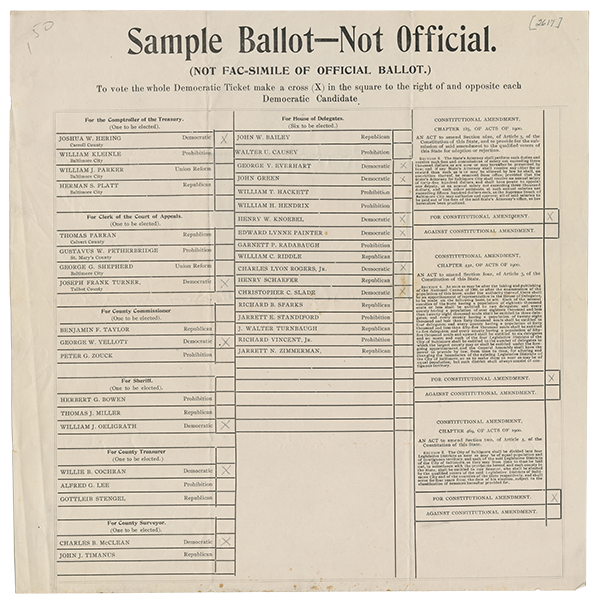 As election ballot without party symbols gave way to more text heavy election ballots, which often included voting on amendments and other measures. In many states, sample facsimile ballots were distributed before an election to help inform voters. 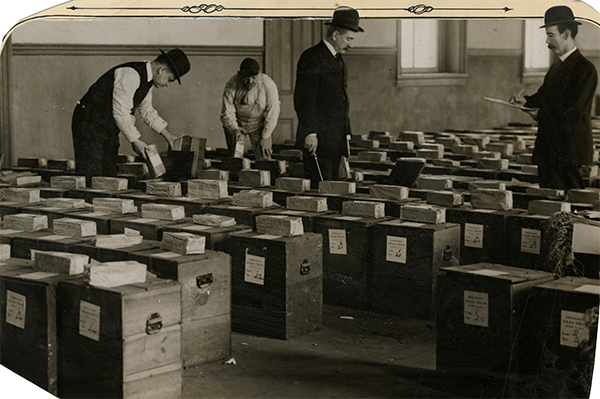 The Wilson Law in Maryland (1904) allowed for several changes to election ballots following the removal of party designation next to a candidate's name, including non-alphabetical arrangement of candidate names, inconsistent party designations, restriction of the publication of sample ballots before an election, and more. It was criticized for giving discretionary power to Democratic election board officials.

The Wilson Law continues the debate over ballot design and suffrage. Over complicated, inconsistent, and text-heavy ballots without sufficient instructions could lead to voter confusion in the voting booth and deliberate attempts to sway elections on favor of a candidate or party.