Port of Bladensburg in 1770

This diorama was one in a series commissioned by the Prince George’s County Jaycees during the Bicentennial of the American Revolution celebration in 1976. They were designed and constructed by model maker Daniel I. Hadley with backgrounds painted by S.F. Kind. Forty years later, the art of the diorama largely has been supplanted by computer modeling. Today this diorama is itself an historic artifact preserving evidence of how we visualized the past through historical reconstruction.

The Port diorama captures a sense of Bladensburg at the pinnacle of its growth as a tobacco port. Although many of the details are conjectures, the designers succeeded in capturing the general layout of the town, evoking many key features. The historical record confirms the presence of sailing ships and associated maritime activities, the tobacco economy, residential and commercial structures, a mill, the network of roads and bridges, and an a surrounding agricultural landscape. 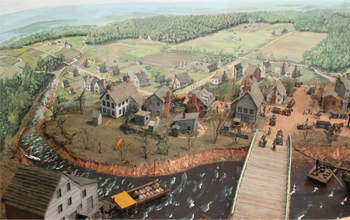 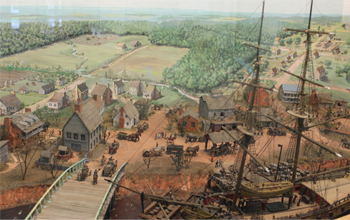 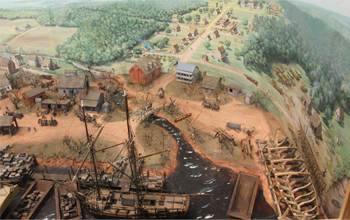