The Dark and Bloody Ground

“Bladensburg was notorious rather than famous, for it was a noted dueling ground."

Even before its name was indelibly linked to a catastrophic military defeat, Bladensburg was known as the site of a dueling ground. Settling personal differences by duel was illegal but increasingly common in politically charged atmosphere of Washington during the era of the War of 1812. Politicians, military officers and private citizens fought approximately 50 duels in Bladensburg between 1808 and 1850. The town was conveniently close to the nation’s capital, and just beyond the reach of federal authorities. The public was scandalized when naval hero Stephen Decatur died fighting a duel with a fellow officer in 1820, but duels continued in Bladensburg until the Civil War era.

As the century progressed, Bladensburg became a source of morbid fascination for tourists and writers. Guide books pointed visitors to the old battlefield and dueling grounds. The moral decay represented by duels left Bladensburg with a sordid reputation. Its fall from grace was complete when the popular writer George Alfred Townsend declared the town to be a “cross-roads Sodom” doomed by its economic decline and its barbaric associations with dueling and human slaughter.

Washington was a popular destination for visitors, almost from its founding. Publications describing the capital city often included nearby attractions, and Bladensburg was no exception. In this guide from 1900, the town’s association with dueling seems the principle reason to include it. 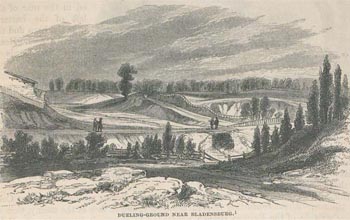 Popular Reading and the Dueling Ground

Duels were still a recent memory when the popular magazine Harper’s Monthly published a 10-page article on Bladensburg’s more notorious duels in 1858. By the mid-19th century, advances in technology reduced the cost of printing illustrations, allowing books and magazines to feed the curiosity of the reader through both image and text. 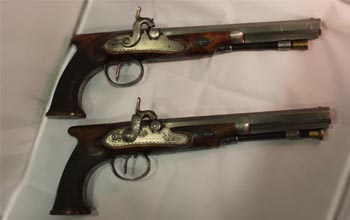 The duel between naval officers James Barron and Stephen Decatur concerned a perceived insult over Barron’s conduct and fitness for service. The code of the duel required that the combatants be accompanied by friends, known as seconds. The seconds arranged for the location and form of the duel, including the choice of weapon. On March 22, 1820 Commodore Barron brought this set of 50 caliber Holmes Percussion pistols to Bladensburg; however, the seconds decided to use Decatur’s instead. Both men were wounded, Decatur fatally. 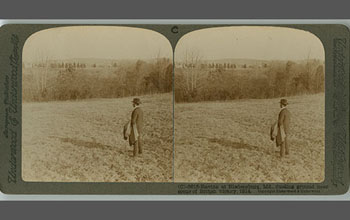 Using a special viewing device, armchair travelers could enjoy three-dimensional images of sites from any place in the world. This view of the Bladensburg Dueling Ground from the early 20th century shows an appropriately desolate scene of the ravine where affairs of honor were settled.