“It was then a thrifty, business-driving, little sea-port, profitably devoted to the tobacco trade…”

- John Pendleton Kennedy, Memoirs of the Life of William Wirt, 1856. 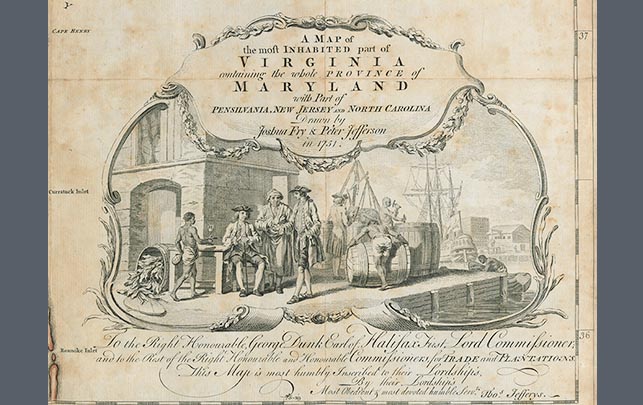 Detail from Joshua Fry and Peter Jefferson. A Map of the Most Inhabited Part of Virginia Containing the Whole of Province of Maryland. 1751.

In October 1742, the Maryland Provincial Assembly established a new town on the “south side of the Eastern Branch of the Potowmack River in Prince George’s County.” Commissioners laid out 60 one acre lots and began offering them to investors for development. The fledgling community, named in honor of Governor Thomas Bladen, was located at the highest point navigable by ocean-going ships on the river. In the years that followed, Bladensburg thrived at the intersection of government regulation, transportation and commerce. As an official tobacco inspection station, local growers were required to bring their crop to the town prior to export. Merchants purchased the inspected tobacco and in exchange offered imported consumer goods from Europe and products, like rum, from the Caribbean.

Bladensburg’s rise was part of a new growth phase in the Chesapeake Bay region. By the mid-18th century, settlers were moving westward from the tidewater areas. Although the makers of the Jefferson & Fry map (at left) did not note the existence of Bladensburg, British merchants were better informed. In their eyes, the new towns and expanding settlement patterns were business opportunities. Among the most aggressive in exploiting new markets were Scottish merchants, primarily based in Glasgow. These “tobacco lords” not only bought tobacco and sold goods, they also provided capital, which they invested in new enterprises such as iron forges or used to extend credit to locals. Bladensburg became an attractive base of operations for agents of the great Scottish merchant houses: Glassford & Co; Cunningham & Sons; Findlay, Hopkirks, and Company.

Findlay, Hopkirks, and Company, Glasglow (Scotland). Account of Hall, W.M. for Dealings at their Bladensburg Store. 1786.