“Ran away from the Subscriber at Bladensburg, a Negro Man named Joe…
He is by Trade a Ship Carpenter or Caulker…He is very artful, and probably may endeavor to pass as a Freeman.” 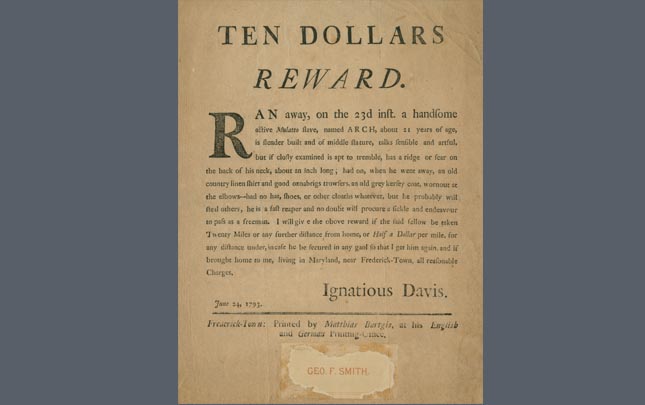 As a key node in the trans-Atlantic economy, Bladensburg rapidly developed the human and physical infrastructure needed to support trade and commerce. Wharves, a shipyard and ropewalk, dwelling houses for merchants and other residents, taverns, roads and bridges, and a mill all emerged. Near the town, local landowners developed large plantations that cultivated tobacco. Slaves and indentured servants were the essential sources of labor that built and maintained this tobacco-based economy. Life for the enslaved was hard, and it is no surprise that many tried to escape by running away.

Although there is no evidence of a formal slave market in Bladensburg, individual merchants and planters frequently engaged in the human commerce of buying and selling slaves. Slave-craftsmen were especially prized for their skills. For example, when wealthy town residents Francis Hatfield and Dr. John Ross died in the 1780s, the appraisers of their property set the top values on the slaves Peter, a carpenter, and James, a blacksmith.