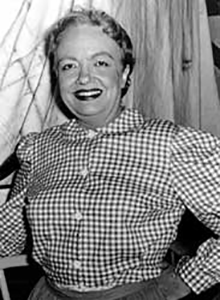 Betty Garde (1905-1989) was best known for playing the role of Aunt Eller in the original Broadway cast of "Oklahoma!," but her long acting career also included film, radio, and television.

On the radio, she appeared in "Mrs. Wiggs of the Cabbage Patch" and "The Aldrich Family," and in various broadcasts with Orson Welles and Eddie Cantor. On film, Garde co-starred with Jimmy Stewart and was featured in the movie "Caged." Her many television credits include appearances on "The Honeymooners" and "The Twilight Zone."

This gallery presents samples from the Papers of Betty Garde at the Library of American Broadcasting.

The collection spans the years 1924 to 1978, and contains clippings, correspondence, photographs, and various artifacts including a bound copy of "selected" sheet music from the musical "Oklahoma!" It was donated to the Library in 1990.

Betty Garde was born in Philadelphia, Pennsylvania in 1905. She began her theatrical career while she was still a student at West Philadelphia High School, after winning a playwriting competition with a one-act drama titled "The English Language Triumphant." She later directed and acted in a production of the work at her high school.

This photograph shows Betty Garde as a young stage actress. It is undated, but was probably taken in the early 1920's.

Garde in Philadelphia for her role in the 1923 production of "The Gold Diggers."

Garde joined the Actors' Equity Association, a "Branch of the Associated Actors and Artistes of America, Affiliated with the American Federation of Labor," on June 14, 1922.

Although she would later perform in numerous radio dramas, Garde remained committed to stage acting throughout her career.

This clipping from the "Jackson Heights News" traces the trajectory of Garde's early stage career up to her role as Harriet Underhill in the Broadway play "The Nervous Wreck," at the Hollis Theater in Boston in 1924. 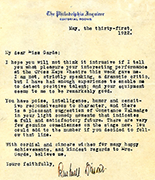 Praise from one of Garde's early admirers, 1922

This 1922 letter from an early fan of Garde's at the Philadelphia Inquirer praises the teenaged actress for her "poise, intelligence, humor and sensitive responsiveness to character."

The 1930's ushered in the "golden age" of radio, and as this clipping illustrates, Betty Garde's dramatic talent was soon adapted to suit the popular medium. Here, she is identified as a "radio actress," though she continued to do stage work.

The writer of the article comments that "Another Chance," a radio drama which Garde produced and directed, provides "evidence of a current trend in broadcasting. It is the application by microphone artists of their years of performing experience to other fields in radio." This trend certainly applied to Garde, who, like many of her peers, was involved in multiple facets of the broadcasting industry over the course of her career.

This newspaper clipping mentions Garde's role on the radio drama "The Primrose Path." She had previously played the role of Emma Wallace in the Broadway version of the play in 1939.

She is pictured here with young actor Kingsley Colton.

This clipping by critic Robert Garland of the "New York Journal American" is a glowing review of the Rogers and Hammerstein musical "Oklahoma!."

Betty Garde played the role of "Aunt Eller" in the original staging of the Broadway hit. It would be her best-known stage performance.

This 1943 clipping celebrates the success of "Oklahoma!" and of Betty Garde, whom it names as "one of the lovely attractions luring crowds" to the performances.

"Not permitted to say what I really want to you but I think you know what it is. Madeleine Carroll. "

Given that the message was sent to the St. James Theater on "Oklahoma's" opening night, one can speculate that the taboo phrase might have been "good luck."

Garde's movie career, which spanned the years 1929 to 1971, usually saw her in character roles. 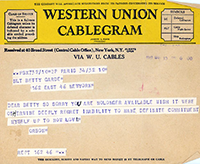 This ambiguous March 10, 1949 cablegram from Paris was sent to Garde by the great Orson Welles:

"Dear Betty, So sorry you are no longer available. Wish it were otherwise. Deeply regret inability to make definite commitment myself up to now. Love Orson."

This May 14, 1950 clipping from the "Los Angeles Times" features a photo of Garde in her role as tough inmate "Kitty Stark" in the film noir melodrama "Caged." Also pictured are her co-stars and scriptwriter Virginia Kellogg.

"Kitty Stark" is a far cry from the lovable "Aunt Eller" of "Oklahoma!"--at one point, the character stabs Hope Emerson's evil prison matron with a fork. Clearly, as an actress, Garde possessed some range.

Eleanor Parker, Hope Emerson, and the script by Virginia Kellogg and Bernard C. Schoenfeld all received Oscar nominations for the film.

From Garde to Walter Winchell, 1950

In this May 1950 telegram that Garde sent to gossip columnist Walter Winchell of the "Daily Mirror," she begs him to refute a rumor that she suffered some injury and lost her eyesight.

She writes, "Walter, I am worried about my future commitments being affected by doubts of my being able even to read a script. Give a girl who has a dollar to make a break and say I'm okay please..." 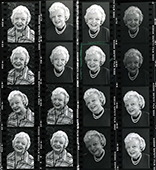 This proofsheet of theatrical headshots comes from late in Garde's career.

She continued to work as an actress well into the 1970's.