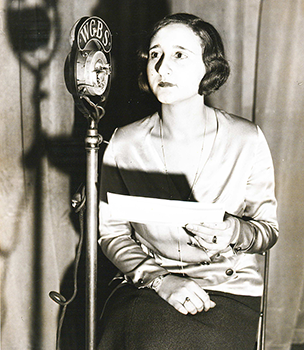 Edythe Meserand (1908-1997) began her broadcasting career in 1926 at NBC, but had her greatest influence at WOR-Radio, New York, which she joined in 1935. There, she achieved a number of "firsts" in broadcasting history: she founded the first radio newsroom, produced the first true radio documentary; and organized the station's enduring Children's Christmas Fund Drive.

Meserand was also a founding member of American Women in Radio and Television (AWRT), and served as the organization's first President, from 1951-1952.

This gallery presents a sample from the Papers of Edythe Meserand at the Library of American Broadcasting.

The collection spans the years 1920 to 2000, and contains scripts, photos, correspondence, clippings, certificates, memos, magazines, speech transcripts, original stories and poems, and various artifacts and media. It was donated to the Library in several installments between 1998 and 2000. 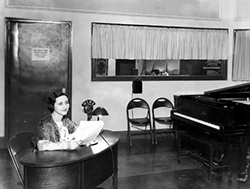 A portrait of Edythe Meserand from the 1920's, at the beginning of her broadcasting career.

Meserand's first on-air job was as a station's "Musical Clock Girl," who popped up every hour on the hour to give the time of day.

In this photograph Edythe Meserand conducts an interview with an unidentified man over WOR radio. 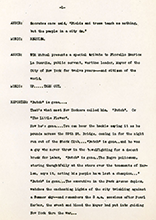 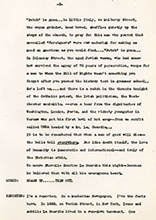 This script, one of Edythe Meserand's many radio broadcasts, is a tribute to New York mayor Fiorello La Guardia upon his death from pancreatic cancer in 1947.

While Edythe Meserand did spend a good deal of time on the air, it was in her role as an executive that she proved to be a true innovator in the broadcasting world: Meserand is acknowledged to be the first person, male or female, to found an actual radio newsroom. She also produced what is considered the first true radio documentary.

One of Edythe Meserand's many innovations and accomplishments was starting WOR's annual charity Christmas fund. This altruistic tradition is carried on by the station to this day. 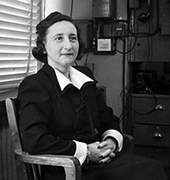 A latter-day publicity portrait of Edythe Meserand taken in her office at WOR. 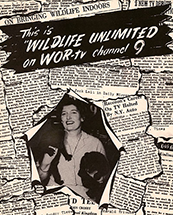 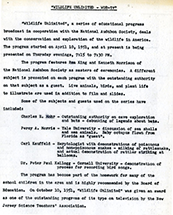 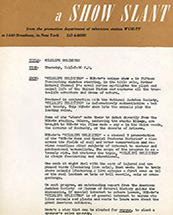 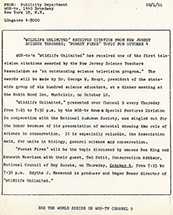 This group of items details the conception, budgeting, and selling of the series.

This is the cover of the program from the first national convention of American Women in Radio and Television (AWRT), held in Detroit, Michigan on January 19, 1952.

AWRT was founded in 1951 with the mission to "advance the impact of women in the electronic media and allied fields by educating, advocating, and acting as a resource to our members and the industry." 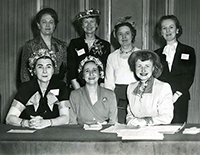 This photograph shows all of the founding officers of American Women in Radio and Television (AWRT). Edythe Meserand was the first president of the organization, and is seated in the front row, center.

AWRT was founded in response to a decision on the part of the National Association of Broadcasters (NAB) to dissolve its "women's division." Fearful that the overall concerns of women within the industry would not be given a voice, some female members of NAB decided to found their own organization.

This article from "Radio-Television Daily," was written by "First President" Edythe Meserand to promote the American Women in Radio and Television (AWRT) organization.

Since its inception, AWRT has served as an advocate for women within the broadcasting field, while also providing its members with job information services and professional development programs.

This newspaper clipping from 1952 announces the first national convention of AWRT.

Today, AWRT is considered the preeminent organization for women in the fields of radio and television. They have over 2,000 members and are headquartered in McLean, Virginia.

Show reviewed in the New Yorker, 1951

The television program "Press Conference," produced by Edythe Meserand, received a positive review in the June 2, 1951 issue of the "New Yorker" magazine. Writer Philip Hamburger calls the show "the real thing," and "an exciting half hour." 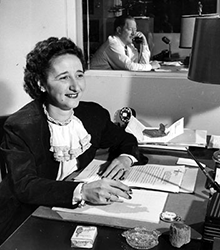 A late-career portrait of Edythe Meserand.

After leaving WOR in 1956, Meserand went on to found her own advertising agency, and run her own tree farm in Albany, New York. 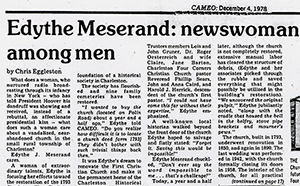 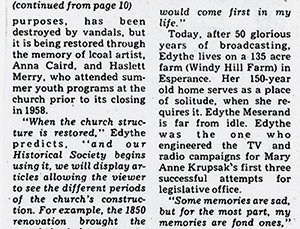 In 1987, American Women in Radio and Television (AWRT) would name its most prestigious award after her. The "Edythe J. Meserand Distinguished Broadcaster Award" is given out annually by the the organization.

The article celebrates Meserand's 50 remarkable years in broadcasting, and the numerous honors and awards she received.