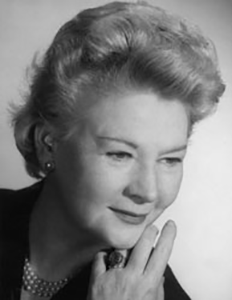 Pegeen Fitzgerald (c. 1911-1989) is often referred to as the "First Lady of Radio Chatter." She and her husband, Edward, broadcast a "husband-and-wife at home" radio show from their New York apartment for over 40 years. Their daily broadcast eventually became a Big Apple institution.

The Fitzgeralds' "ramblings," as they called them, covered a variety of topics: book reviews, what came in that day's mail, current events, and the activities of their friends. Sometimes the couple even bickered on the air. When Mr. Fitzgerald died in 1982, Mrs. Fitzgerald carried on with the program alone until it went off the air in 1985.

This gallery presents samples from The Pegeen Fitzgerald Collection at the Library of American Broadcasting.

The collection spans the years 1947 to 1988, and contains photographs, correspondence, slides and negatives, reel-to-reel audiotapes, unframed original paintings, newspaper and magazine clippings, and a hard-bound book written by Fitzgerald. It was donated to the Library in 1996. 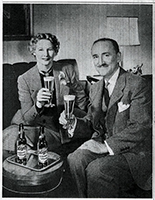 The Fitzgeralds in ad for sponsor Blatz Beer, 1951

Pegeen and Edward Fitzgerald hosted a "husband-and-wife at home" radio talk show from their New York apartment for over 40 years. Their daily broadcast eventually became a Big Apple institution.

In this 1951 advertisement from the "New York Herald Tribune," we see "the Fitzgeralds of Radio and TV fame...toast their co-workers with Blatz, Milwaukee's finest and and New York's largest selling Milwaukee-brewed beer." 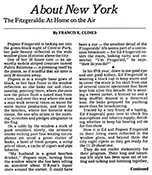 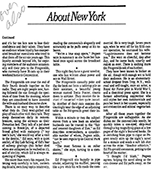 Ed and Pegeen Fitzgerald even merited their own review in the show biz bible "Variety," where the reviewer states that "their good judgement in what to talk about was evident."

The review also mentions Tex McCrary and Jinx Falkenburg's "at home" show, one of the many programs that sprung up on the air in an attempt to imitate Ed and Pegeen's early success. 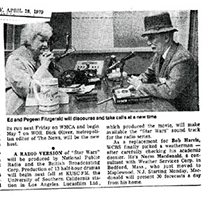 This 1979 clipping from the "New York Daily News" notes the Fitzgeralds' timeslot change. 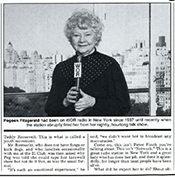 When WOR fired Mrs. Fitzgerald in 1983 after 46 years on the air there was an enormous outcry among the public and the press.

This article from "Electronic Media" denounces WOR's unceremonious dismissal of a broadcasting institution.

Though the majority of their program chit-chat was improvised, the Fitzgeralds sometimes did bring a few notes and jotted down topics with them to the breakfast table.

In these notes from January 4, 1982, Mrs. Fitzgerald jotted down ideas like the following:

"These days it almost takes more brains to fill out your income tax than it took to earn the money."

"Most of us can keep a secret. It's the people we tell it to that can't."

Money was the subject of the day in these notes written by Pegeen Fitzgerald for one of her daily broadcasts.

A lifelong animal lover (especially of cats) Pegeen Fitzgerald was an animal rights supporter and a strict vegetarian who often promoted the diet on the air. She published this cookbook "Meatless Cooking: Pegeen's vegetarian recipes" in 1968.

Some of Pegeen Fitzgerald's other animal-related activities included founding a sanctuary for abandoned cats and protesting against animal testing. 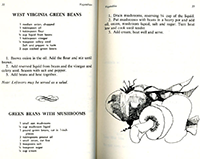 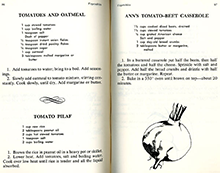 These recipes for tomatoes appear in "Meatless Cooking: Pegeen's Vegetarian Recipes," published in 1968. 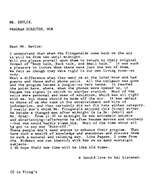 Listeners to the Fitzgeralds' program often felt very close to the couple, as this letter from a fan to the program director of WOR demonstrates.

It is perhaps not surprising that listeners felt a personal connection, as the couple's daily discussions were so intimate and down-to-earth, and broadcast not from a studio but from one home to another.

Condolences on death of Edward Fitzgerald, 1982

One of the many letters of condolence Pegeen Fitzgerald received upon the death of her husband Edward in 1982.

From the Society for Avatar Meher Baba, 1982

In this heartfelt 1982 letter from a group of longtime fans at the Society for Avatar Meher Baba of New York, the writer expresses how she felt the Fitzgeralds' program "represented...real and honest family life which is so absent in today's fast-paced world."

Pegeen Fitzgerald to WRO on being fired, 1983

In 1983, after 46 years on the air, WOR fired Pegeen Fitzgerald. It was not an act she took lying down. She sent this letter to the station's manager.

Though 72 years old at the time, Fitzgerald had no interest in retiring from broadcasting, stating, "I hope to work for at least 5 more years."

She bounced back quickly, and landed a job at WNYC only a few weeks later. She was on the air there until April of 1988. 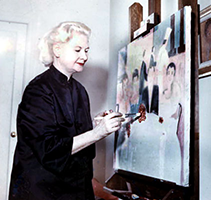 Pegeen Fitzgerald was an accomplished artist whose paintings were often exhibited. Here she is seen at her easel. 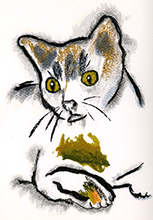 Pegeen Fitzgerald's love of animals often found its way into her artwork. She was especially fond of cats and, according to the New York Times profile in 1979, she and her husband had 10 house cats at their apartment in New York City and another 78 cats at their weekend home in Connecticut.

Mrs. Fitzgerald's affection for her subject is apparent in this whimsical cat portrait. 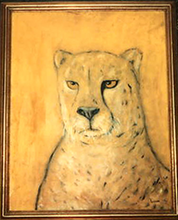 Pegeen Fitzgerald did not limit her enthusiasm for all things feline to house cats, as is demonstrated by this portrait. 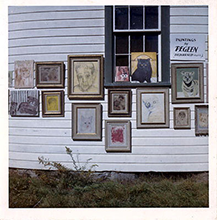 Display of works, by Pegeen Fitzgerald

An assortment of "Paintings by Pegeen" displayed at the Fitzgeralds' country home in Connecticut.