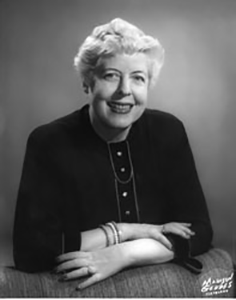 Mildred Funnell (1901-1977) gained her first taste of radio fame in 1933 as "Evalena," Lum's girlfriend, on the highly successful radio comedy show "Lum & Abner." Later, she achieved great longevity as a Cleveland-based talk show host of both radio and television.

She hosted WTAM radio's "Women's Club of the Air," before going on to co-host her own radio show, "Mildred and Gloria," and its television counterpart, "The Idea Shop," with Gloria Brown. Brown and Funnell's on-air partnership lasted for 11 years. Funnell concluded her broadcasting career by hosting a series called "Take Five" over WJW radio in Cleveland in 1959.

This gallery presents samples from the Papers of Mildred Funnell at the Library of American Broadcasting.

The collection spans the years 1932 to 1955, and contains correspondence, clippings, photographs, newsletters, press releases, scripts, scrapbooks, and programming schedules. It was donated to the Library in 1978.

Mildred Clarice Funnell was born in 1901 in Honeyoye, New York. During Funnell's childhood, her family moved from New York to Michigan before settling in Ohio. It was there that she ended up spending most of her career, working in theatre, radio, and television.

This glamorous early portrait of Funnell as a young actress was probably taken in the 1920's. Funnell studied at the Schuster Martin School of Drama in Cincinnati, Ohio, the alma mater of such actors as Tyrone Power and Virginia Payne.

This mid-career portrait of Mildred Funnell was taken during her years of "double-duty," hosting both the "Mildred & Gloria" radio show and its accompanying TV series, "The Idea Shop." 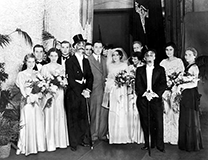 Originally an actress, Funnell was a member of the WTAM players, which led to her biggest radio role, that of "Evalena," Lum's girlfriend on "Lum and Abner" in 1933.

Though the series was on radio, the performers were often dressed up as their characters and posed for publicity photographs like this one, which were later sent out to newspapers and magazines. 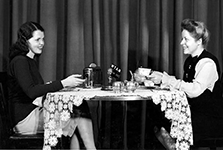 Funnell and Brown's programs consisted of a lively mix of interviews, helpful hints, and sometimes, even disagreements. Funnell once said, "We disagree frequently, as will sisters, mothers, daughters, husbands and wives. But, by pre-arrangement, we discuss out loud and settle our differences as they come up." 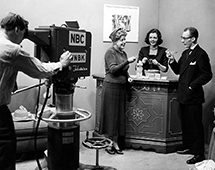 Mildred Funnell and Gloria Brown on the set of "The Idea Shop." This TV version of Funnell and Brown's talk show aired for 5 years. 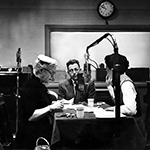 This photo was taken during one of the daily broadcasts of the "Mildred and Gloria" radio show. Their interview subject is unidentified.

In this photo "Mildred and Gloria" interview actress Ann Sheridan for their radio show.

Over the years, the pair would interview a number of renowned guests including the chemist Dr. B.M.G. Zweiker, actress Joan Crawford, and fitness guru Howard Inches. 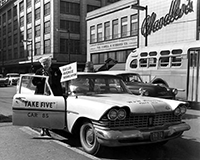 After parting ways with Gloria Brown after a fruitful 11 year partnership, Funnel concluded her career by hosting a series called "Take Five."

The broadcasts focused on businesses along Cleveland's Euclid Avenue. The show aired over WJW in Cleveland until 1959.

This first page of Funnell's self-written outline of "Biographical facts" highlights her family background and education.

This second page of Funnell's biography gives an overview of her experience in theater and radio, and highlights some of her personal interests and affiliations.

This newspaper clipping from a local Ohio paper announces the addition of Mildred Funnell, "one of Sandusky's fairest daughters," to the cast of the "Lum 'n' Abner" radio show in the role of Lum's girlfriend, Evalena. 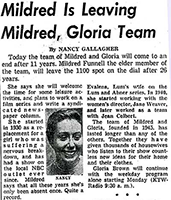 This 1954 newspaper clipping discusses Funnell's departure from the "Mildred and Gloria" program.

According to the article, "together they have given thousands of housewives who listen to their show countless new ideas for their home and their clothes." 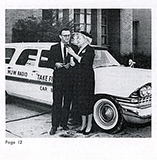 In this 1959 clipping from "The Ohio Builder" we see Mildred Funnell conversing with Milt Wolf, president of the Home Builder's Association (HBA), and posed in front of WJW's Car 85. Funnell drove Car 85 around downtown Cleveland's Euclid Avenue as part of her "Take Five" radio show.

Appearance as panelist on WRNT, 1947

In this letter dated May 12, 1947, Betty Wells, director of women's activities for KRNT in Des Moines, Iowa, thanks Funnell for her participation in a panel on "Women's Programs on Local Stations."

A telegram from Jacques Kahn, dated July 1, 1955, which consists of "twenty five congratulatory words on your twenty fifth anniversary with radio."

Mildred Funnell started with WTAM as a temporary secretary to station manager John F. Royal before segueing into performing, and, ultimately, an executive position. Funnell once boasted about her longevity at the station, "[I've] survived seven managers and three ownerships."

Funnell was involved in many programs over the years, including "The Women's Club of the Air."

This complimentary 1959 memo from station manager Bob Martin congratulates Funnell and the WJW radio staff for their "thorough, colorful, and authoritative" election coverage.

Original script pages from the 1933 broadcast of "The Wedding" epidsode of the "Lum 'n' Abner" radio show, which featured Mildred Funnell in the role of the bride, "Miss Evalena Schultz."

The episode of their wedding was broadcast live from Constitution Hall in Washington DC.

This "Idea Shop" promotional magazine was a tie-in with Mildred Funnell and Gloria Brown's TV show of the same name.

Booklets like this were printed by the station and distributed to viewers.

The "Idea Shop" featured ideas for the homemaker that focused on household, wardrobe, and arts and crafts. 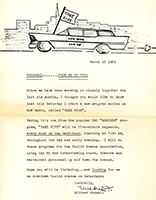 Announcing the beginning of "Take Five"

For the program, Funnell conducted mini-interviews with people working in the downtown shops, theaters, restaurants and businesses. These were packaged into five minute segments, which were broadcast every hour on the half-hour from 7:30 a.m. until the early evening.

"Take Five" was Funnell's last broadcasting job. It was axed by the station the same year it began, in 1959.