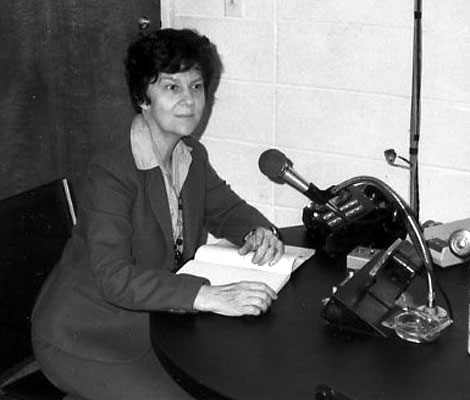 Betty Ramey (c. 1924- ) co-founded WRKL Radio with her husband Al Spiro in Rockland, New York in 1964. WRKL radio grew into a pioneering, indomitable station which, despite setbacks, provided community members with a means of voicing their opinions over the airwaves.

After Spiro's death in 1968, Ramey, a former art teacher, succeeded her husband as manager of the station and as the host of its controversial, news-making discussion program "Hotline." She continued to run WRKL as a very successful, local radio station until 1985, serving as host of "Hotline" until November of that year.

This gallery presents samples from the Betty Ramey/WRKL Station Collection at the Library of American Broadcasting.

The collection spans the years 1953 to 1989 and contains business records, photographs, awards, audio materials, and clippings. It was donated to the Library by Betty Ramey in 1998. 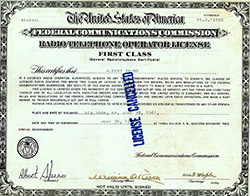 This original 1961 broadcasting license was granted to Betty Ramey's husband, Albert Spiro, and WRKL by the Federal Communications Commission.

Radio broadcasters must reapply for their existing license every few years, at which point their prior permission is "cancelled" (like this one) and a new license is issued.

In the beginning, Betty Ramey and Al Spiro operated WRKL-AM out of a trailer, pictured here, parked near a New York swamp. The radio station's format consisted of news, call-in shows, and some music. 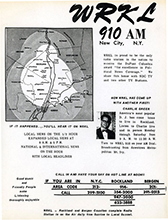 This original "coverage" map for WRKL, Rockland County, New York, indicates which towns and to what distances the station's signal could (theoretically) reach. 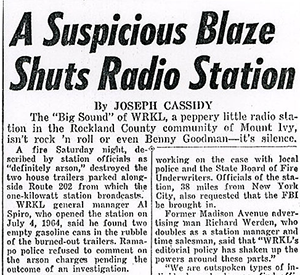 In a July 1967 broadcast of the "Hotline" talk show over WRKL, Al Spiro and some guests discussed civil rights.

After the program aired, the station received several threatening phone calls. Two days later, WRKL was fire-bombed by an unknown arsonist. The blaze destroyed all of the station's broadcasting equipment and facilities, as this newspaper clipping testifies. 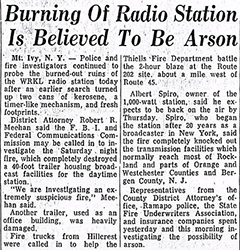 In this additional newspaper coverage of the WRKL fire-bombing, it was reported that police and fire investigators discovered "two cans of kerosene, a timer-like mechanism, and fresh footprints."

However, despite this evidence, the arsonist(s) were never identified. 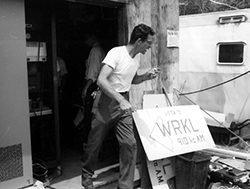 This photo shows the state of WRKL's facilities after the 1967 fire-bombing.

The arson was believed to have been carried out by individual(s) angry over a discussion on the topic of civil rights which had been broadcast earlier in the week.

Another 1967 photo of WRKL's destroyed studio after the fire. 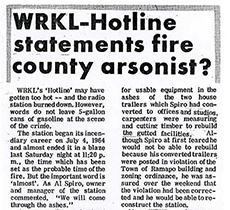 This newspaper article questions whether "WRKL's 'Hotline' may have gotten too hot." The politically-charged call-in talk show was one of WRKL's most popular programs, as it provided a space for community dialogue on important and controversial issues.

Only five days after the fire, thanks to community support and the donation of studio space and equipment from fellow area broadcasters, WRKL was able to sign back on the air. Their first broadcast was an installment of "Hotline," hosted by Al Spiro. 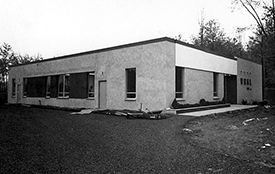 Thanks to their insurance money and the contributions of listeners and first amendment advocates, Betty Ramey and Al Spiro were able to rebuild WRKL and start anew.

This photograph shows the station's new structure, which was built in 1968.

This sculpture, The Phoenix, by Louise Laskey, was presented to Al Spiro and Betty Ramey after the 1967 fire as a representation of their indomitable spirit.

The sculpture is made out of pieces of the original, destroyed station. 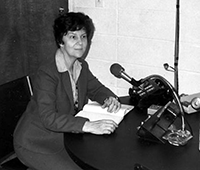 Soon after the station was rebuilt in 1968, Al Spiro died.

Betty Ramey, pictured here inside the station's rebuilt broadcasting studio, continued to run the station on her own. She took over her late husband's duties, even becoming the new host of "Hotline." 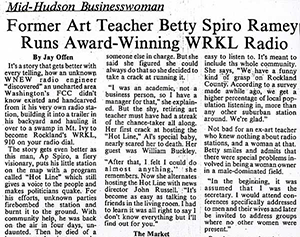 Ramey co-founded WRKL with her husband Al Spiro in 1964, and took it over after his death in 1968. In the article, Ramey discusses her experiences entering the male-dominated field of radio broadcasting. 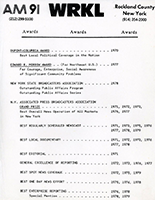 This WRKL-produced document lists the various awards and honors the station had won. 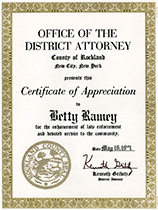 Over the course of her broadcasting career, Betty Ramey received a wide assortment of honors, like this one from the Office of the District Attorney of Rockland County, NY.

Other groups who have honored Ramey over the years include the Department of Social Services of Rockland County.