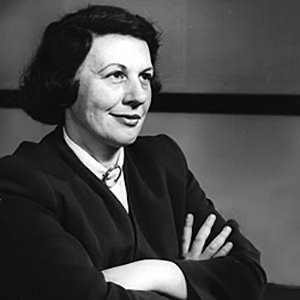 Originally an actress, Brooks (née Irma Lemke) began with WGY in 1931. In the late 1930's she became a TV pioneer as well, as she wrote, produced, and often starred in live, on-air productions over WGY's television station, WRGB-TV.

This gallery presents samples from the Papers of Martha Brooks at the Library of American Broadcasting.

The collection spans the years 1924 to 1991, and contains photographs, correspondence, speeches, scripts, certificates, clippings, station publications, station program schedules, audiotapes and film. It was donated to the Library in 1999.

Martha Brooks began her career as an actress with WGY-Radio in 1931. This photograph shows an early radio broadcast featuring Brooks (far left) and several unidentified women.

Some of Brooks' early radio roles were on the series "Frontier Days," and on the east coast version of "One Man's Family" and "FBI in Action."

Brooks on-air with her husband

This photograph shows a typical radio broadcast. Brooks' husband, Dave Kroman, can be seen seated across from her, on the upper left.

Kroman was originally a high school math teacher, but he later followed his wife into working as a radio performer for WGY. Later, he hosted his own "college bowl" style TV game show, "The Little Red Schoolhouse."

"The Martha Brooks Show" aired over WGY-Radio Schenectady for 34 years, from 1937 to 1971. Here we see Brooks in her role as interviewer and host.

Originally, the program consisted of typical "women's fare"--cooking, fashion, interior design, etc.--but with time, Brooks expanded the scope of her show and began to discuss weightier topics, including marital strife, childbirth, and menopause. 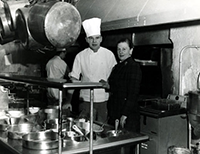 Taking her mike into the kitchen

Neither Brooks nor her show were ever completely studio-based. She would take her microphone (and later, her camera) wherever a story was happening, be it the circus, Howe's cave in New York, or right into the kitchen. 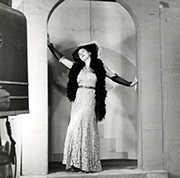 Brooks returned to her roots as an actress in the early live television production "Glory in the Daytime." The program was broadcast over WRGB-TV in the early 1940's.

WGY was a pioneer in the presentation of television dramatics. In addition to starring in many of the station's productions, Brooks also wrote many of the teleplays.

Martha Brooks as she appeared in the early live TV production "The Enemy Within." 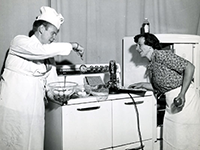 The TV station WRGB began experimental broadcasts in 1928. In the early 1940's, Brooks starred in the station's (and, some believe, the nation's) first commercially-sponsored television program, "Keeping Your Home Shipshape." For this role Brooks assumed another alias, Mrs. Ima Fixit. She starred on the program opposite a puppet created by Joe Owens.

Martha Brooks, looking quizzical amid a cast of colorful characters, in this still from an unknown early WRGB-TV production. 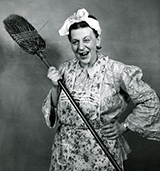 In character for an early TV drama

Brooks gets into the spirit of her character for an early live TV performance.

Brook's and other "personalities" promoted, 1964

WGY introduces "A New Personality...New Times for Your Favorite Personalities..."

This clipping is from the "Times-Union," Albany, New York, January 13, 1964. It shows a promotional advertisement for "The Martha Brooks Show." Martha Brooks is seen alongside fellow radio personalities Bill Edwardsen and Jerry Ducie. 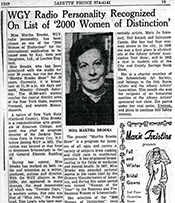 Brooks was selected for the international publication "2000 Women of Distinction" in 1969.

A newspaper article from 1971 announces Martha Brooks' retirement after 40 years on the air and some 12,000 broadcasts.

In the article, Brooks says, "The woman of the '70s is educated and sophisticated. A chit-chat program is below her depth. Women have reached full maturity in this decade and will switch you off if you don't reach their level of intelligence." 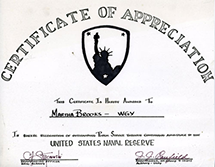 Martha Brooks received this undated certificate of appreciation from the U.S. Naval Reserve in gratitude for her service to the organization.

For excellence in reporting, 1955

Brooks was one of four winners chosen in 1955 for the "Life Line of America Award" sponsored by the Grocery Manufacturers of America.

She was chosen for the award based on the excellence of her reporting on the manufacturing of baby food. She spent two days in a baby food factory with her microphone and tape recorder getting the interviews on which her report was based.

For participation in World's Fair 1965

This certificate from General Electric (later the owner of the NBC network) acknowledges Martha Brooks for her meritorious service to GE's "Progressland" at the 1965 New York World's Fair. 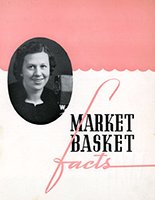 Irma Lemke got her professional name from one of the first radio programs she hosted over WGY. "Market Basket" was a daily program aimed at women. The station manager at the time felt that the show's host should have the same initials as the program. Hence, Irma Lemke became "Martha Brooks."

"This woman's place is in the home!"

"Martha Brooks is one woman whose place is definitely in the home--your home. And that's just where you'll find her, too, when you tune in WGY each morning, Monday through Friday, from 9:15 to 10:00."

"Mike Portraits" was one of many promotional pieces sent out by WGY to let listeners get to know their various on-air personalities.

According to the text, Brooks' "woman-to-woman approach to the problems and interests of the Northeastern housewife have made her the ten-to-one choice of listeners...for the most reliable and complete homemakers' program."

Another promotional item from WGY, this time celebrating the revenue-enhancing benefits of advertising on the air with "The First Lady of the 17th State...chatty, informative, and personality-plus..."

"Martha Brooks is a super-saleswoman. Four announcements in her program last year produced over 6,000 sales with a retail value in excess of $4,000."

Held on May 8, 1971, the "Martha Brooks Dinner Dance" celebrated Brooks' retirement after 40-years of service to stations WGY and WRGB. 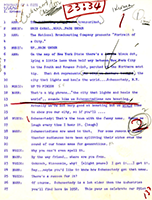 Script from the radio program "Portrait of a City," which Brooks produced in 1952.