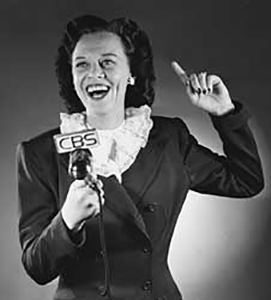 Irene Beasley (1904-1980), known as "the long, tall gal from Dixie," was a composer, singer, and radio personality. She is best remembered for her long-running musical quiz show, "Grand Slam," a program which she wrote, produced and hosted. It aired from 1943 to 1953.

This gallery presents samples from The Papers of Irene Beasley at the Library of American Broadcasting.

The collection spans the years 1908 to 1978, and contains photographs, business records and correspondence, promotional materials, sheet music, and 78 rpm records. The Library received the collection in 1980. 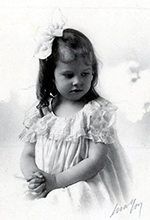 Irene Beasley was born in Whitehaven, Tennessee in 1904. She posed for this childhood portrait at age 3 ½, circa 1907. Later, at the age of 6, she moved with her family to Amarillo, Texas.

Beasley's love of music began in childhood. Her maternal grandmother first taught her to play the piano during summer visits to her home in Plum Point, Mississippi. That early love of music would blossom as she grew older, and shape Beasley's career as a singer, songwriter, and radio personality. 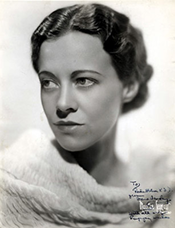 The exact date of this glamorous portrait of Beasley is unknown, though her waved hairstyle and youthful appearance indicate that it was probably taken during the 1920's. 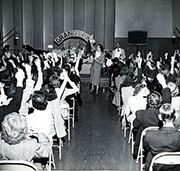 Beasley was best know for her work hosting the long-running musical quiz show, "Grand Slam." Here she can be seen addressing an enthusiastic audience.

Beasley wrote, produced and hosted the popular program, in which contestants had to identify a song from hearing a portion of the tune. "Grand Slam" aired from 1943 to 1953. 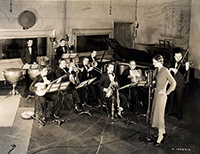 In this photograph it becomes clear why the statuesque Beasley was nicknamed "the long, tall gal from Dixie."

Beasley first launched her radio career in 1928 in Memphis, Tennessee, where she was working as a teacher. She found success as a songwriter and vocalist, and after a year of performing in theaters, "studios" and clubs in Chicago, she moved to New York and was signed by CBS in 1929. 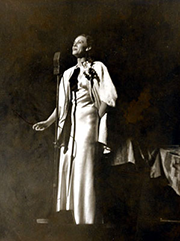 Solo in the spotlight

In this photograph, an elegantly attired Beasley performs solo in the spotlight with a seasoned performer's confidence and professional air. Though she gained her greatest fame as the writer, producer and host of her own program, Beasley was known as a talented vocalist. One fan wrote that she had "the sweetest voice on the air." 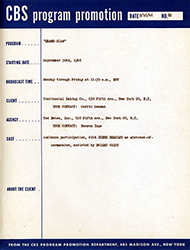 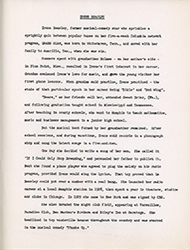 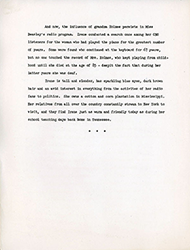 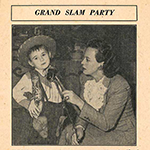 This newspaper clipping, titled "Grand Slam Party," c. 1946, features a photo of Beasley holding the microphone for 5-year old Dexter Alderiso, "proving they're neither too young nor too old to play Grand Slam."

The clipping refers to Beasley as the "singing star and mistress of ceremonies of the musical quiz show which is celebrating its third anniversary over CBS this fall," and goes on to say that "Irene has brought the prize table into thousands of homes to thousands of lucky listener winners." 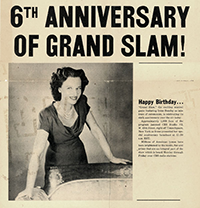 "Grand Slam, the exciting musical game featuring Irene Beasley as mistress of ceremonies, is celebrating its sixth anniversary over the air today. Approximately 1,000 fans of the program jammed CBS Studio #2, W. 45th Street, right off Times Square, New York as Irene presented her special anniversary broadcast at 11:30 a.m. EST. Millions of American homes have been brightened by the music, fun, and prizes that are an integral part of the show which is heard Monday through Friday over CBS radio stations."

Grand Slam enjoyed one more season before going off the air in 1953.

This Western Union Telegram from August 14, 1953 congratulates Beasley on the success of her program. "Grand Slam" went off the air in 1953.

"Dear Miss B and Family, Grand Slam has blessed so many, perhaps most of all those of us who worked with it. Very best wishes and much love to each and all. Kathie"

In this Western Union telegram from August 13, 1953, Beasley's father congratulates her on the success of her long-running program, "Grand Slam," which went off the air in 1953.

"My wonderful daughter you have done a magnificent job and have made tens of thousands of friends throughout this land of ours. Congratulations and Love, Papa" 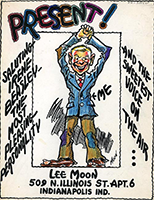 Hand-drawn card from a fan of the show

This colorful hand-drawn card from a cartoonist and fan of "Grand Slam" from Indianapolis, Indiana reads:

"Present! Saluting Irene Beasley--the most pleasing personality and the sweetest voice on the air... Lee Moon."

From the Victor Talking Machine Company, 1928

This 1928 letter from the Victor Talking Machine Company (featuring the famous "Nipper" logo) refers to royalty checks for 8 selections Beasley recorded when she was starting her radio career in Memphis, Tennessee.

Beasley wrote the song "If I Could Only Stop Dreaming," and persuaded her father to publish it while she was still working as a teacher of math, music, and business management at a Memphis Jr. high school. The success of this tune helped launch her local radio career, which ultimately led her to Chicago, New York, and a career with CBS. 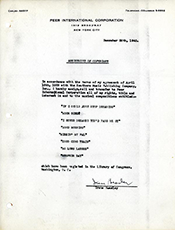 Assignment of copyright for Beasley's songs, 1940

This legal document from Peer International Corporation, dated December 26, 1940, indicates that Beasley sold the copyright to her original musical compositions (including her first song, "If I Could Just Stop Dreaming,") in an agreement with Southern Music Publishing Company, Inc. 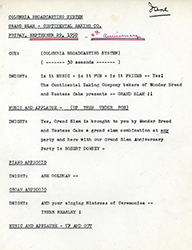