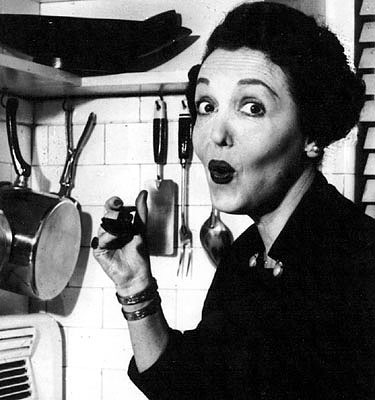 Helen Faith Keane (1901- ) hosted the TV program "The Helen Faith Keane Show…For Your Information" during 1951. The program, which was aimed toward women, dealt with everything "from how to play the piano to what to ask your doctor about breast cancer." It aired for one year over New York's WABD-TV, the flagship station of the now defunct Dumont network. Keane won the McCall's Golden Mike Award for her program in 1951.

After her one-year excursion into broadcasting, Keane, a graduate of Cornell University, returned to her earlier vocation of teaching. She was an instructor in fashion advertising and retailing at NYU from 1952 to 1977.

This gallery presents samples from the Papers of Helen Faith Keane at the Library of American Broadcasting.

The collection encompasses the year 1951, and includes correspondence, promotional materials, photographs, and various artifacts. It was donated to the Library in 1997. 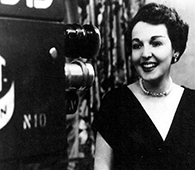 Helen Faith Keane on the set of "For Your Information."

Keane's program invited viewers to write in with questions and problems. When enough letters on any one topic arrived, Keane and her staff would seek out an expert in this area and build a show around the topic.

Keane was far more than just a "talking head" on her show; she took an active interest in all aspects of her program's production. 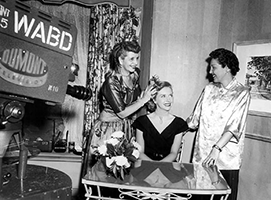 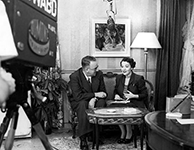 Keane's television career began when she watched a televised fashion show that was broadcast over the DuMont network. Feeling that the male commentator was uninformed and condescending on the topic, she phoned the station the next day to complain. In response, she was told that if she felt she could do a better job, she should come down to the station and try it herself--so she did.

This publicity shot shows that cooking was one topic explored on Helen Faith Keane's daily program. However, Keane and her show also addressed far weightier topics including what to ask your doctor about breast cancer.

Before her entry into broadcasting, Keane, a Phi Beta Kappa graduate from Cornell University (where she was a member of the women's rowing team), had worked as a fashion coordinator for Montgomery Ward New York. 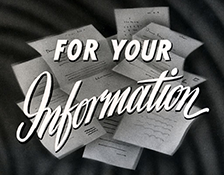 An original title card used at the beginning of each broadcast of Helen Faith Keane's show.

The television camera would zoom in on this graphic to identify the show and its host. 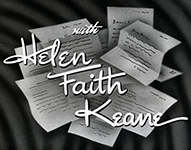 An original title card used at the beginning of each broadcast of Helen Faith Keane's show.

The illustration of letters as a background is a reference to the program's viewer-driven selecting of show topics.

In 1951, "For Your Information with Helen Faith Keane" won the McCall's Golden Mike Award for "Women in Radio and Television." This is the cover of the program from the award ceremony.

One of that year's judges, Senator Margaret Chase Smith of Maine, said of "For Your Information with Helen Faith Keane": "The material was inspiring evidence of what women can do, and are doing, for our country and our people."

According to the pamphlet, after Keane solicited letters from her viewers she "extracted from individual problems the broad principles that made them apply in some part to every woman. Thus, viewers became full-fledged participants in the program…"

The pamphlet, probably intended for the DuMont network's advertisers and sponsors, emphasizes Keane's integrity and the credibility with which she is viewed by her audience. Thus, it reads, "Since women are constantly asking Helen Faith Keane how to handle their social problems, how to keep their husbands, how to train their children and how to better their looks, they naturally respect her counsel on how to spend their money wisely." 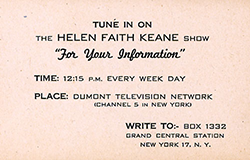 This reminder card was printed and distributed by Helen Faith Keane's television station.

After spending one successful year in broadcasting, Keane returned to her earlier vocation, in education. She would go on to be a professor at New York University for over thirty years.

Thanks from League of Women Voters, 1951

A letter of thanks to Helen Faith Keane from the New York chapter of the League of Women Voters.

As "For Your Information" was designed to assist the community, Keane's program did quite a bit of "outreach" activity to engage viewers and the public.

The letters in this gallery come from copies of the originals that were then fashioned by the station into a promotional dossier on the program and its host.

From National Society of Volunteers of America, 1951

This July 20, 1951 letter from the Volunteers of America (National Society) praises Helen Faith Keane and her program for addressing the subjects of narcotics, and for her "frank handling of a working family budget" on her program.

The reference to "Straw Hat" in the first paragraph refers to a then-popular brand of perfume which Keane distributed for free, as a station and program promotion.

The letters in this gallery come from copies of the originals that were fashioned by the station into a promotional dossier on Keane and her program.