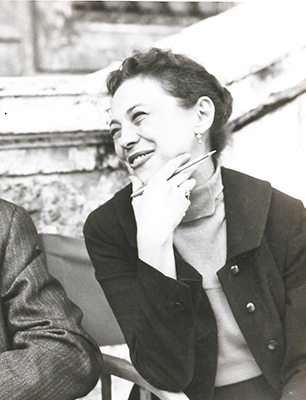 Originally intent on being an actress, Lawrence (née Kalech) began her show business career as the "right hand" of Broadway producer Billy Rose before joining NBC-TV in 1958. At NBC, she formed a fruitful partnership with Garroway, serving as an associate producer on his "Today" show and his ambitious weekend program "Wide Wide World."

This gallery presents samples from The Papers of Lee Lawrence at the Library of American Broadcasting.

The collection spans the years 1957 to 1999 and contains clippings, correspondence, books, photos, transcripts, scripts and other radio and television production documentation, and various artifacts. The Library received the majority of the collection in 1995, with a subsequent donation in 2004. 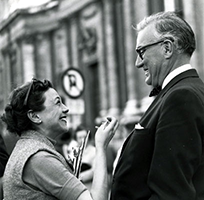 In this photograph Lee Lawrence is pictured with her longtime colleague and friend Dave Garroway, who once called her "the world's best researcher."

Lawrence joined NBC-TV in 1958, where she formed a fruitful partnership with Garroway, serving as an associate producer on his "Today" show and on his ambitious weekend program "Wide Wide World." 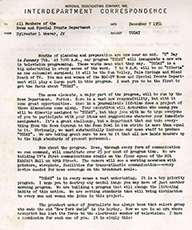 In this memo to NBC staff, "Today" show creator Sylvester "Pat" Weaver outlines his broad vision for a new kind of morning TV program "that will change the listening habits of this nation."

Though Lee Lawrence did not join "Today" until 1958, she may have acquired this memo after the fact from Dave Garroway. 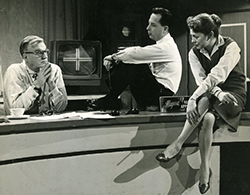 This photograph shows (from left) Dave Garroway, an unidentified man, and Lee Lawrence on the set of "Today."

Muggs made his "Today" show debut in 1953, and quickly put the program on the map as viewers young and old began to tune in every day to see their favorite "morning monkey." 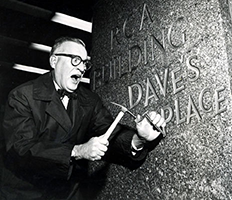 In this gag photo, Dave Garroway chisels his name into 40 Rock, the New York headquarters of NBC.

Garroway, a member of the "Television Hall of Fame," was the original host of the "Today" show, from 1951 to 1962. He is considered one of the greatest communicators in the history of the medium.

In 1958, Lee Lawrence was Dave Garroway's aide-de-camp for the series "Wide Wide World," a 90-minute program which incorporated live segments from different parts of the country.

This is the cover of a promotional booklet for "Wide Wide World" put out by the network. 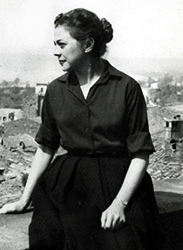 In April 1960, the "Today" show broadcast for a week from Italy. Here is Lee Lawrence pictured on location.

The program visited, among other places, St. Peters Square, the Bernini Hotel, and the Trevi Fountain, and interviewed the likes of Peter Ustinov, Federico Fellini, and the Countess Dorotea Bedini. 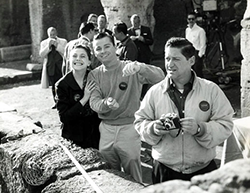 Originally intent on being an actress, Lawrence came to New York in 1943, working as the "right hand" to master showman Billy Rose. This job segued into a career behind the scenes with NBC. 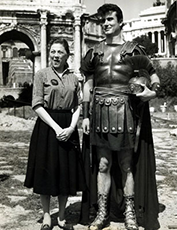 Lee Lawrence, on-location in Rome, with a new friend. 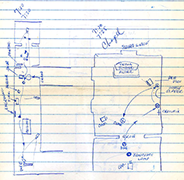 Although today television programs regularly broadcast from all around the world, in 1960 such an undertaking was far from commonplace. When the "Today" show broadcast live from Italy for a week, it was a massive technical and logistical undertaking.

This hand-sketched diagram details the technical set-up and camera placement for one of these productions. 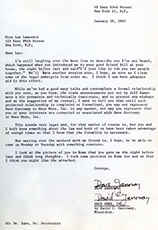 From Dave Garroway to Lawrence, 1963

This 1963 letter from Dave Garroway to Lee Lawrence offers a glimpse into both of their personalities, and into the respectful and affectionate nature of their friendship. 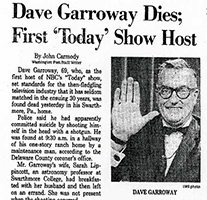 Lee Lawrence's friend and colleague Dave Garroway was famous for his low-key on-air persona (which has since been widely imitated), and for his open-palmed sign off, "Peace."

Included in the Papers of Lee Lawrence at the Library of American Broadcasting are a pair of Garroway's glasses and one of his trademark bow-ties, which were probably given to Lawrence by Garroway's widow.

In 1961, Lee Lawrence was the victim of a horrific, random crime in which she was attacked in her apartment by an escaped mental patient. She was beaten nearly to death, and then thrown off her third-floor balcony.

Lawrence was in a coma for six months, and doctors feared she might die. Yet, she pulled through. Multiple fractures had damaged her legs, hip, and pelvis; her right leg eventually had to be amputated below the knee. She was never expected to walk again--but she did, after spending a full 2 years in the hospital.

In 1964, Lawrence began a second career, entering a life of public service in Washington, DC. She worked with the White House and various federal government entities, writing, producing, organizing conferences and promoting awareness of issues faced by people with disabilities.

This photograph, taken c. 2001, captures Lee Lawrence's humor, love of life, and her amazing and triumphant spirit of perseverance.