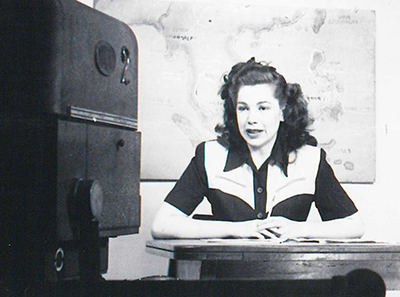 Fran Harris-Tuchman (1915- ) began her broadcasting career in 1942 as a member of the pioneering all-female group known as the Women's Auxiliary Television Technical Staff (WATTS). The WATTS kept WBKB-TV (now WLS) in Chicago on the air for the duration of WWII, as the majority of the station's male staff were overseas.

Later, Harris-Tuchman would go on to become the first woman to head the television division of a major advertising agency, when she founded the TV department of Ruthrauff & Ryan in Chicago. She also founded her own highly successful ad firm, Harris-Tuchman Productions. Her firm produced commercials for Starkist Foods and Mattel, including the first TV ads for the Barbie doll in 1959.

This gallery presents samples from The Fran Harris-Tuchman Collection at the Library of American Broadcasting.

The collection spans the years 1946 to 1996, and contains clippings, photos, scripts, reports, minutes of meetings, and production elements including slides, story boards, and animation cells. Fran Harris-Tuchman donated the collection in two installments: the first in 1998, with a subsequent donation in 1999. 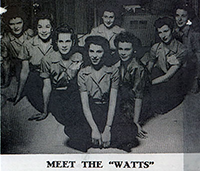 A 1943 newspaper clipping on the "petticoat revolution" of the Women's Auxiliary Television Technical Staff (WATTS) taking over the TV airwaves. 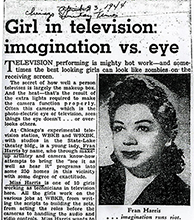 The unusual work of the Women's Auxiliary Television Technical Staff (WATTS) often got written up in the press. This clipping is from 1944. 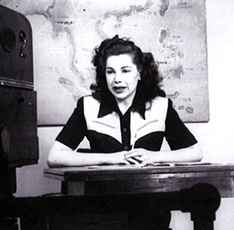 Keane's television career began when she watched a televised fashion show that was broadcast over the DuMont network. Feeling that the male commentator was uninformed and condescending on the topic, she phoned the station the next day to complain. In response, she was told that if she felt she could do a better job, she should come down to the station and try it herself--so she did. 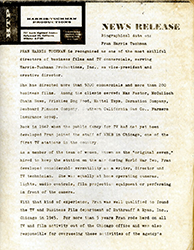 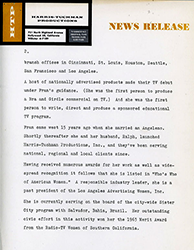 Harris-Tuchman Productions' roster of clients included doing on-air promotions for the original Ice Follies. This advertisement was created in 1955.

Harris-Tuchman Productions devised this script for a TV promotion of "Shipstads & Johnson Ice Follies of 1956" titled "The Sport of Skating" in August of 1955. 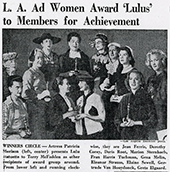 The "Lulu" Awards are bestowed annually by the Los Angeles Advertising Women's organization. Fran Harris-Tuchman was a frequent honoree over the course of her career. In this clipping from the "Los Angeles Examiner," she is pictured in the top row, center.

The "Lulu" Award is named in honor of Frances "Lulu" Holmes, the first woman to open an advertising agency in the United States.

Harris-Tuchman won a "Lulu" Award in 1959 for producing the first television commercials for the Barbie doll. 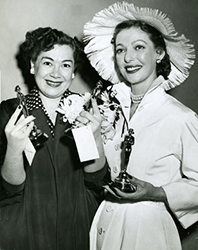 Harris-Tuchman at "Lulus" with Loretta Young

Harris-Tuchman with her "Lulu" Award, presented by Loretta Young. 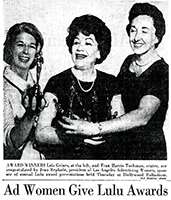 The text of the clipping explains that the "Lulu" competition is open to women in advertising from 13 western states. 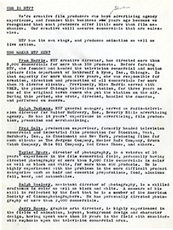 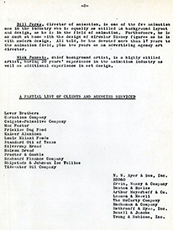 A "who's who" of Harris-Tuchman Productions.

Features a partial list of clients and agencies served.