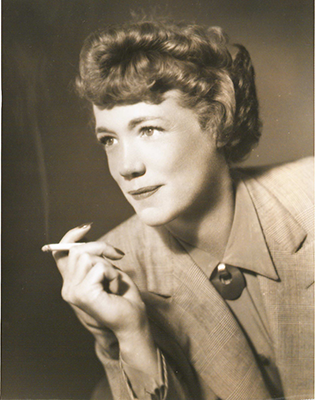 Mona Kent (1909-1990) was a prolific radio and TV script writer who, from 1940 to 1951, wrote every episode of the radio soap opera "Portia Faces Life," which followed the travails of a young, widowed mother who is also a successful attorney.

Kent also created several other radio soap operas, contributed scripts to TV's early science fiction hit "Captain Video & His Video Rangers," and wrote innumerable stories, adaptations, and treatments for both radio and television. She is also the author of a novel, "Mirror, Mirror on the Wall."

This gallery presents sample items from the Papers of Mona Kent at the Library of American Broadcasting.

The collection spans the years 1940 to 1951, and contains scripts, original stories, photos, books and other media, and some promotional items. It was donated to the Library in 2001. 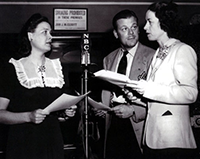 Mona Kent wrote every episode of the radio drama "Portia Faces Life," which told the story of female attorney Portia Blake. The program aired for 13 years, from 1940 to 1953. 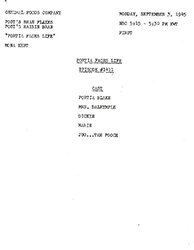 This script for episode #1411 of "Portia Faces Life," written by Mona Kent, is one of over 1,000 scripts that exist in the Mona Kent collection.

When "Portia Faces Life" went off the airwaves in 1953, it left the radio audience with one of the greatest cliffhangers of all time: Portia had just been convicted of a murder she hadn't committed and was about to be taken off to jail.

In 1943, in an attempt to broaden the radio soap opera genre, Mona Kent created the radio soap "A Woman of America." It told the story of Prudence, a pioneer woman heading west along the Oregon Trail.

This promotional piece pictures actress Anne Seymour, who starred as the lead in this "drama of covered wagon days."

Though an interesting experiment, the series was not the success that was hoped for, and went off the air in 1946.

This is a general outline for the radio soap "A Woman of America," written by Mona Kent. 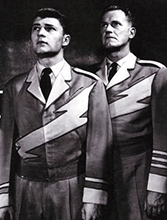 Mona Kent contributed scripts to "Captain Video and His Video Ranger," one of many youth-focused science fiction TV shows popular in the early 1950's (others included "Flash Gordon," "Space Patrol," and "Tom Corbett, Space Cadet"). "Captain Video" aired on the now defunct DuMont network from 1949 to 1955.

This photograph shows Al Hodge (right), who played the Captain, and Don Hastings (left), as his Video Ranger. (Don Hastings would go on to play Dr. Bob Hughes on the daytime drama "As the World Turns." He joined the cast of that show in 1960, and continues in the role to this day).

The program was serialized, with one story arc taking place over the course of several episodes. Each episode ended with a Saturday matinée-worthy cliffhanger. When one storyline concluded, a short "transitional" script was often written, in order to tie up the loose ends of the previous story and set up situations for the Captain's next adventure. 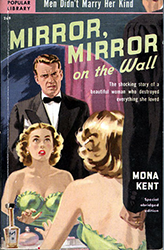 In 1950, Mona Kent published the (semi-autobiographical?) novel "Mirror, Mirror on the Wall"--the story of beautiful Dell Thornton, a writer of "syrupy soap operas for radio" who, according to its cover, "destroyed everything she loved!"

The book was originally published in hardcover before being reissued in paperback with the dramatic, colorful "pulp fiction" cover seen on the abridged version here.

There is some scattered evidence that Mona Kent may have authored a later novel, but this has yet to be confirmed. 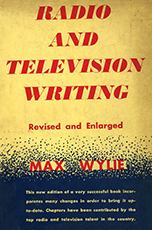 In 1950, Mona Kent was tapped by author Max Wylie to write about daytime dramas for his book "Radio and Television Writing."

Mona Kent's chapter, titled "Perpetual Emotion," outlines the mechanics, meaning, and (in her words) the "main ingredients" for a successful soap.